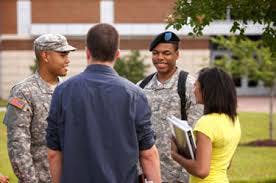 Congress intended for veterans from the Iraq and Afghanistan era to go to college for free at the public school of their choice. And, for most, that’s the case.

But, on occasion, veterans end up living in a new state once their service has ended. Then, they find that the federal government’s reimbursement to colleges won’t fully cover the higher tuition rates that generally apply to students who come in from out of state.

“There are many veterans, through no fault of their own, who are forced to pay exorbitant tuition rates to schools simply because of the transit nature of their military service,” said Rep. Jeff Miller, the Republican chairman of the House Committee on Veterans Affairs.

About half the states already have waivers in place designed to attract veterans to attend their public universities. Lawmakers and veterans groups are pushing for a national approach.

Budget scorekeepers estimate the provision would affect about 3,800 veterans initially and save the federal government about $139 million over the next decade. The bill passed by a vote of 390-0.

Some have complained that Congress is putting in place another unfunded federal mandate. When the bill came up before a congressional subcommittee last year, the American Association of State Colleges and Universities said that establishing tuition policy is a clear state right.

“This bill screams of government overreach,” the association said at the time.

But the arguments from veterans groups won out. The groups said military veterans are the only Americans that sometimes cannot physically be present in a state long enough to satisfy residency requirements simply because they were serving their country.

In all, 20 states already have laws designed to help veterans get the in-state rate. Another 12 have legislation pending. Eight more have individual schools or school systems that provide veterans with waivers so they can get the in-state tuition rate, according to Student Veterans of America, an advocacy group.

The bill stipulates that the in-state tuition requirement would only apply to veterans who enroll within three years of leaving the service.

The requirement has broad support in the Senate as well, but it’s included in much broader veterans legislation that some Republicans say may be too sweeping and expensive.

The House bill passed on Monday contains other provisions that affect the Department of Veterans Affairs, including eliminating performance bonuses for the department’s senior executive staff through 2018.