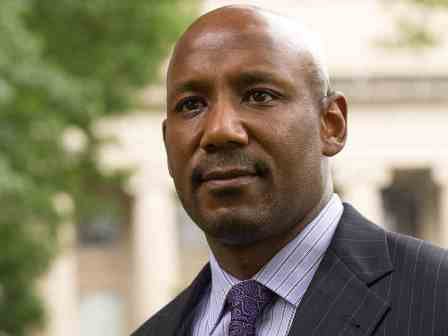 Dr. Craig Wilder says many people are unaware of the role slavery had in the rise of America’s esteemed institutions.

The regret expressed by several top universities in recent years for their connection to slavery has led to a number of institutions probing to uncover how deeply linked they were to the slave enterprise.

Schools like Harvard and Brown have acknowledged that they benefitted from slavery. Many others have acknowledged buying or renting out slaves, using slave labor for construction and accepting funds for endowed chairs or start-up seed money from wealthy merchants who were profiting from the slave trade.

These revelations and a growing body of research suggest that prior to the Civil War, universities with no ties to slavery were the exception and not the norm. The academia connection to slavery has gained more attention recently with the publication of Ebony and Ivy: Race, Slavery and the Troubled History of America’s Universities, by Dr. Craig Steven Wilder, a professor of history at the Massachusetts Institute of Technology.

“People are surprised at the role that slavery played in the rise of these cherished institutions,” says Wilder, adding that many people don’t realize the central role slavery had to the economy of the colonies. He says 20th century historian “Samuel Eliot Morison admits in one of his books that it’s the West Indian trade and the slave trade that saved the New England economy.”

Wilder says that six of the nation’s nine oldest universities — Princeton, Rutgers, Dartmouth, Columbia, Brown and the University of Pennsylvania — were founded between 1746 and 1769, the period “when the African slave trade [reached] its peak.” He notes that all of these institutions were founded with some funding by slave merchants, who were also the biggest philanthropists of their day, providing seed money for community institutions, including hospitals, libraries and colleges.

“You have universities — particularly old and established universities in the northeast — that owe their endowment to the slave trade,” says Dr. Joshua Rothman, a professor of history at the University of Alabama whose research interests include race and slavery. “If you go deep enough you will find money linked to the slave trade. When you get into universities founded in the south [in] the 18th and first half of 19th century, you will find multiple issues. State money comes from slavery. If you have private money it comes from people making a fortune from slavery.”

Many historians note that slavery was so deeply embedded into the fabric of society that it would be hard to find an industry or institution in those days that was not tainted by it.

Dr. James Campbell, head of the commission at Brown that studied that university’s connection to slavery, says most industries, including banks, insurance companies and railroads, benefited from slavery or used slave labor. He notes that at least one newspaper, the Hartford Courant, has acknowledged ties to slavery. According to a series published in the newspaper in 2002, the Courant ran slavery advertisements for nearly 60 years.

“If your institution has roots going back to the 17th, 18th or early 19th century, it’s hard to believe that it didn’t have an entanglement with slavery,” says Campbell, now the Edgar E. Robinson Professor in United States History at Stanford.

Yale inadvertently got the ball rolling on the connection between higher education institutions and slavery in 2001 when a team of graduate students, working on behalf of some disgruntled unions, published a report titled “Yale and Slavery.” Among other things, the report alleged that nine of Yale’s 12 residential colleges were named for slave owners.

“It was designed to embarrass the university,” says Campbell. “They discovered some interesting facts and they also made some mistakes.” Some scholars criticized the study, saying it lacked historical context.

But it was Brown’s bold decision to take a critical look at its own record that garnered the most attention, which happened shortly after Dr. Ruth Simmons was appointed president in 2000. The first African-American to head an Ivy League school, she assumed the helm while Brown was still reeling from a controversial debate over slavery. The debate was sparked by the publication of an ad in the collage paper, written by controversial columnist David Horowitz who argued against reparations.

In response, Simmons established a Steering Committee on Slavery and Justice to fully explore Brown’s relationship with slavery. Simmons’ decision to set up the committee was deemed controversial at the time and met with pushback from many, including alumni. In the end, the committee made several recommendations, including calling for an unqualified acknowledgment that the founders of the university had profited from the slave trade. One of the most visible outcomes of the committee’s study was the creation of a Center for the Study of Slavery & Justice, whose mission includes studying slavery in the Atlantic world and its modern day consequences.

Dr. Anthony Bogues, Lyn Crost Professor of Social Sciences and Critical Theory and director of the center, says a second objective is to educate people about its work. The center also partners with groups to enhance public education in the Providence area.

Since the establishment of the committee at Brown, several other colleges and universities have investigated their own slavery connections.

On the eve of its 175th anniversary in 2011, Emory University’s board of trustees issued a formal statement of regret over the school’s involvement with slavery. Emory’s founders and early leaders were supporters of slavery. The Atlanta-area school was named for John Emory, a Methodist bishop who owned slaves. University officials have said publicly that research shows slaves played an important role in building the institution in its early days in the 1830s.

The University of Alabama, a school with a turbulent racial history, has also expressed regret over its connection to slavery. Slaves appear to have been a common presence at the institution.

According to Dr. F. Erik Brooks, chair of the Department of African American Studies at Western Illinois University and an Alabama native, many of the buildings on UA’s campus were built by slaves; they also worked in the president’s home as servants. Not only did some slaves serve professors, but the university rented out slaves and some students brought slaves to campus with them, Brooks says.

Brooks says in one instance, a slave named Sam was beaten by an assistant to a professor for refusing to measure the amount of coal for an experiment the professor was conducting. That professor was a renowned scientist by the name of Frederick Barnard, who would later become president of Columbia University and for whom Barnard College is named.

Many historians say these ongoing revelations provide an important context for people.

“Most Americans today have little if any appreciation of the scale and importance of slavery in the history of the modern world,” says Campbell. “The value of enslaved property in the United States at the beginning of the Civil War was greater than the value of all American banks, factories and railroads combined.

“Even that doesn’t capture the centrality of the institution,” continues Campbell. “The idea that some Americans have that this was a peripheral institution, that this was a curious anomaly in society … is just not true. I think the abolition of slavery in this country is one of the epic achievements of democracy.”

Brooks says these reports showing the colleges’ connection to slavery are important because the United States has never really addressed the issue of slavery.

“Universities are supposed to be places where we discuss and investigate intellectual issues,” he says. “We haven’t done our job if we don’t study these issues.”

Adds Bogues: “We still need to have a national conversation about slavery, as something that was grounded in the historical structure of this society. We are
not living in a post-racial society.”