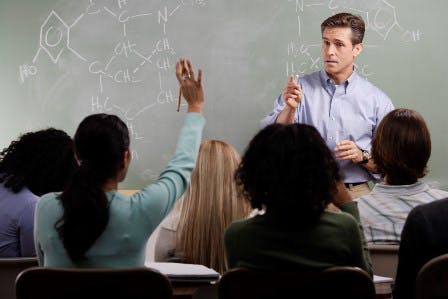 INDIANAPOLIS ― New teachers should be ready to teach the moment they set foot into a classroom, and they need to possess the “cultural competence” necessary to effectively teach students from diverse backgrounds.

Those were among the major themes that emerged during the three-day annual conference of the American Association of Colleges for Teacher Education.

In making the case for why teachers must be ready to teach on day one, Deborah Loewenberg Ball, dean of the school of education at the University of Michigan, lamented how often she hears teachers relate that they were a “wreck” during their first year of teaching.

“This kind of talk can’t go on being acceptable,” Ball said during a presentation about accountability for teacher preparation programs.

“Airline pilots don’t say, ‘My first few years of flying I was a wreck,’” Ball said. “That needs to be gone.”

Ball, who won this year’s AACTE award for Outstanding Contributions to Teacher Education, also proffered that teacher candidates should be deemed “safe to practice” before they begin to teach.

Asked by Diverse during a Q&A if “safe to practice” was too low of a standard for educators to be expected to meet given the overall purpose of education, Ball acknowledged that the concept was ripe for discussion but noted that students are being put at risk when they are placed in classrooms with ill-prepared teachers.

“Children suffer when they have teachers who are really underprepared for the work,” Ball said. “When they say the first year they didn’t know what they were doing, that means it was not a good year.”

Ball made her remarks at what she and others at the conference said is a time when policymakers – persistently concerned with raising student achievement and closing the so-called “achievement gap” – are paying unprecedented attention to the role that teacher education programs play in cultivating America’s new teachers.

But there are different perceptions about the level of urgency and how literal things should be taken when calls are made for teachers to be ready to teach when they are fresh out the gate.

“Folks may think this is a high bar to say that people should be ready to teach on day one,” said Sarah Silverman, program director of the Education Division of the National Governors Association. But she said the “day one” admonishment should be taken with a grain of salt.

“This definition suggests that we raise the bar for demonstrating effectiveness or progress toward effectiveness,” Silverman said during a panel discussion titled “Clinical Preparation, From Policy to Research to Practice: Strengthening the Programs.”

She added, however, that teachers must be ready to work with the students in their locales and be “ready to grow into roles that require increasing responsibilities.”

Silverman said often education policy is not aligned with research, and that its incumbent upon colleges of education to brief governors and other policymakers on what the research shows.

“It’s critical to see yourself as an advocate for your work, and being able to translate your work into talking points that specify what is critical and why the research supports your position can get you a long way in terms of translating research into policy,” she said.

But part of the problem is there is a dearth of research about which clinical practices are best for preparing teachers, said Pam Grossman, a professor in the Graduate School of Education at Stanford University.

“This is an area in which we need to know much more than we do,” Grossman said.

For instance, she said, more must be known about how much clinical experience is necessary.

“Is more always better?” Grossman asked, noting that there has been a trend toward longer and earlier field experiences.

“We know less about what’s the optimal time you want to spend in school,” Grossman said. While having no field experience is negative in terms of outcomes, she said, there is no evidence that more field experience results in better outcomes.

And the characteristics of the school where the fieldwork takes place must also be taken into account, she said.

“A lot of times, a bad setting is not necessarily a high quality experience,” Grossman said.

Dwight Watson, dean of the College of Education at the University of Northern Iowa, said diversity alone will not guarantee that America’s teachers will possess the cultural competence needed to teach diverse students.

“It’s one thing to diversify the workforce,” Watson said during a presentation titled “Creating Culturally Competent and Confident Teachers.”

“But it’s equally important to make sure teachers going out there are culturally competent,” Watson said, noting that – contrary to what is often assumed – merely being a teacher of color does not necessarily mean that one possesses the cultural competence needed to teach students of color.

“Another thing about this cultural competence is it needs to be embedded in in what we do,” Watson said. Among other things, he said, it’s important for teacher preparation programs to get teacher candidates to appreciate where students are from and what experiences they bring to the classroom. He also stressed the need to “shape the disposition” of teacher candidates so that they are more willing to work to fill any gaps in cultural competence once they become aware of them.

Christopher Busey, Assistant Professor of Social Studies Education at Kent State University, said “cultural competence” is often bandied about as a buzzword and presented in a fragmented way instead of as just one component of a much broader perspective that teachers should have of students.

“It’s almost as if we’re preparing the teachers to look at students as a cultural piece and not look at it from a humanistic perspective with regard to culture,” Busey said.

And while teaching cultural competence is one thing, exemplifying it is something entirely different, said Regina Williams-Preston, a public school teacher in the South Bend public school system, speaking at a panel discussion titled “Stand and Deliver: Mitigating the Effects of Poverty on Student Success.”

She cited research that shows Black male students are often meted out disproportionate discipline, and that it would continue unless teachers take a different tact with perceived infractions and discipline problems.

“We can give teachers tools, change our code of conduct, change our procedures, but until that teacher internalizes it and begins to look at what they do differently and approach situations differently, there’s not going to be a big difference,” Williams-Preston said.