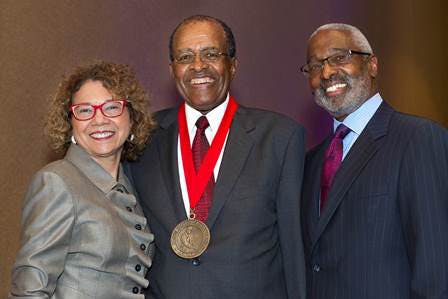 “What an honor to close out a decade by adding living legend, Dr. James Rosser, to the list of John Hope Franklin award winners,” said Maya Minter, vice president of editorial and production for Cox, Matthews & Associates, the Fairfax, Va.-based company that publishes Diverse. “He has tirelessly made contributions to education here in the state of California and well beyond with over 33 years of service.”

As a saxophonist belted out smooth sounds, dozens of well-wishers paid homage to Rosser, who recently stepped down from his post as president of CSULA.

During his tenure at the public state institution, Rosser was lauded with championing various diversity initiatives.

“He has been a trailblazer,” said Dr. Mildred Garcia, president of California State University- Fullerton and a longtime friend.

Garcia, along with Dr. Benjamin F. Quillian, a senior administrator with the California State University system, presented Rosser with the Franklin Medal.

According to Frank L. Matthews, co-founder of Cox, Matthews & Associates, the Dr. John Hope Franklin award was established in 2004 to recognize the extraordinary career of the pioneering historian, scholar and social activist. Past recipients include scholars such as Drs. David Levering Lewis, Maya Angelou and James Comer.

“I am deeply honored and personally moved to receive this award,” said Rosser, 74. He urged his colleagues to continue to fight against “educational elitism” and to help make higher education more accessible to the masses.

“We have to roll up our sleeves, get our hands dirty and do the work that needs to be done,” he said. “We need to be more involved in helping to create the future.”

This is the third year that Diverse has presented the award at the ACE conference, the annual gathering of the nation’s presidents and top administrators at two and four-year colleges. This year’s reception was sponsored by TIAA CREF.