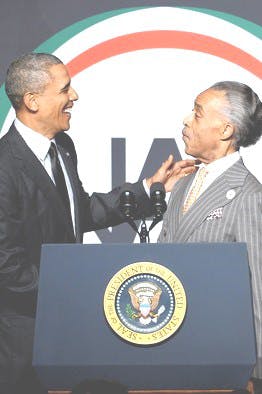 NEW YORK — President Obama delivered a fiery speech before the annual National Action Network’s convention on Friday and accused the GOP of waging in an all-out assault on voting rights.

“This recent effort to restrict the vote has not been led by both parties. It’s been led by the Republican Party,” Obama said, adding that new voter identification laws are being put into place to help diminish the voting rolls. “If your strategy depends on having fewer people showing up to vote, that’s not a sign of strength. That’s a sign of weakness. And not only it is ultimately bad politics, ultimately it is bad for the country.”

Speaking before the civil rights group founded in 1991 by activist and MSNBC talk show host Rev. Al Sharpton, Obama said that the future of voting rights is currently in grave danger. “The stark simple truth is this: the right to vote is threatened today.”

The president’s speech came a day after he participated in the 50th commemoration of the 1964 Civil Rights Act at the Lyndon B. Johnson Presidential Library in Austin, Texas. His speech was delivered amid criticism by some that over the past six years in office Obama has not done enough to speak forcefully about voter disenfranchisement.

But in an interview with Diverse following Obama’s speech, Sharpton said that he thought the president set the right tone.

“I think that for the president of the United States to stand there and say that voting rights has now been more attacked than since 1965 is historic because the challenge was laid out by the leader of the free world,” said Sharpton. “Now the question is follow-up. We have to live up to the call.”

Obama criticized the efforts of some states to make voters produce identification cards when they enter polling booths. He said 60 percent of Americans don’t have passports.

“Just because you don’t have the money to travel abroad doesn’t mean you shouldn’t be able to vote here at home,” he said, to thunderous applause.

Much to the dismay of Obama and civil rights leaders, the U.S. Supreme Court invalidated part of the Voting Rights Act last year. In a 5-4 ruling the Court ended federal oversight by invalidating the formula Congress used to determine which jurisdictions had to seek “preclearance” from the Justice Department or a federal court to alter election procedures.

The group laid out an ambitious plan to advocate for better schools, decrease the health disparities and fight to repeal Stand Your Ground laws in Florida and elsewhere.

“I think it was historic in the sense that it was probably the most well attended civil rights convention in the last five to 10 years,” said Sharpton, who added that Obama offered his presidential approval of the work that the civil rights group is engaged in.

With the mid-term elections on the horizon, Sharpton said that it’s important that ordinary Americans are galvanized around the issues that impact their daily lives.

“We’ve got to continue to organize on the ground, just as we did in 2012,” said Sharpton, who pointed out that the percentage of Black voter turnout during the last presidential election surpassed the White vote.