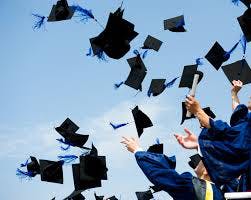 WASHINGTON ― With college commencement ceremonies nearing, the government is offering a modest dose of good news for graduating seniors: The job market is brightening for new grads—a bit.

But finding work—especially a dream job—remains tough for those just graduating. Many are settling for jobs outside their fields of study or for less pay than they’d expected or hoped for.

The Labor Department on Tuesday said the unemployment rate for 2013 college graduates—defined as those ages 20 to 29 who earned a four-year or advanced degree—was 10.9 percent. That was down from 13.3 percent in 2012 and was the lowest since 7.7 percent in 2007. The drop reflects the steady recovery in overall U.S. economic growth and hiring.

But unemployment for recent grads was still higher than the 9.6 percent rate for all Americans ages 20 to 29 last October, when the government collected the numbers.

“I’m finding that all these entry-level jobs are requiring experience I don’t have or degrees that are just unattainable right out of college,” says Howard Rudnick, 23, who graduated last year in political science from Florida Atlantic University and wound up earning $25,000 a year working for an online shoe company.

“The worst part is that I’m afraid at some point I may have to go back to school to better myself and take on more debt just so I can get a better-paying job.”

Over time, though, Americans who have college degrees are still far more likely to find employment and to earn more than those who don’t.

Last year’s female graduates fared better than men: 9 percent were unemployed as of October last year, compared with 13.7 percent of men. Analysts note that the economy has been generating jobs in many low-wage fields—such as retail and hotels—that disproportionately employ women

“It seems like the jobs that are growing fastest are jobs that are low-wage jobs, service jobs,” says Anne Johnson, executive director of Generation Progress, an arm of the liberal Center for American Progress that studies youth issues.

Alexa Staudt’s job search lasted just three weeks. Before graduating from the University of Texas last spring, Staudt, 23, had landed an administrative position at an online security company in Austin.

“I had marketable skills from my internships” in event planning, marketing and copy-editing and experience working as a receptionist for a real estate firm, Staudt says.

She’s happy with the job and the chance to stay in Austin.

Yet in a report last year, the McKinsey & Company consultancy found that 41 percent of graduates from top universities and 48 percent of those from other schools could not land jobs in their chosen field after graduation.

In a study last year, economists at the University of British Columbia and York University in Canada found that college graduates were more likely to be working in routine and manual work than were graduates in 2000. The researchers concluded that technology was eliminating some mid-level jobs that graduates used to take. The result is that many have had to compete for jobs that don’t require much education.

“Having a B.A. is less about obtaining access to high-paying managerial and technology jobs and more about beating less-educated workers for the barista or clerical job.”