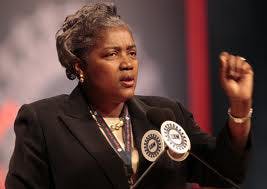 Donna Brazile, who just celebrated her 20th year as an adjunct professor, says, “I find teaching to be one of the most important things I do every week with my life.”WASHINGTON ― It’s a Wednesday afternoon at Georgetown University and Donna Brazile is interrogating her students about the latest political happenings in the news. The conversation abruptly shifts to whether Hillary Clinton might run for president in 2016.

“We all know that Hillary is in the process of writing her memoirs of her years in the State Department, but that has not stopped the news media from trying to figure out what else she might be up to,” Brazile quips with a cynical smirk. “So, of course, every week we get treated to what I call ‘Clinton du jour.’”

The students laugh in unison.

This up-and-close encounter with one of the nation’s most prominent political strategists and television pundits is why they’ve enrolled in her “Women in American Politics” class in the first place.

Since 2002, Brazile has taught the popular course, where it is cross-listed with the Women’s and Gender Studies program and the Department of Government, at the Jesuit institution.

For Brazile, who managed Al Gore’s 2000 presidential campaign and has served as an advisor to countless other congressional races across the country, teaching isn’t simply about telling old war stories from the campaign trail (although she has plenty to share with her students, many of whom want to run for political office someday).

On this particular day, she’s giving her 29 students a brief overview of how women in the U.S. House of Representatives and Senate have accrued political power by positioning themselves on key congressional committees.

She then moves into a spirited discussion about the second wave of feminism and the campaign for the Equal Rights Amendment, pointing out that six states — Iowa, Delaware, Nebraska, Vermont, North Dakota and Alaska — have yet to elect a woman to the U.S. House of Representatives.

Students say that her course is a rigorous examination of the history of women in the political process and the hard-fought battles they’ve had to wage over many decades, including an in-depth look at how the media have scrutinized women candidates running for office.

From time to time, Brazile brings in other well-known women strategists, like Ann Lewis, Bay Buchanan and Ana Navarro, and reveals personal anecdotes about her time working as a young staffer for the late Rep. Shirley Chisholm or as an aide on the Rev. Jesse L. Jackson’s 1984 and 1988 presidential campaigns.

“I find teaching to be one of the most important things I do every week with my life,” says Brazile, who just celebrated her 20th year as an adjunct professor. “It’s a calling; it’s a service; it’s an opportunity to learn so much from my students. I can talk about the campaigns I’ve worked on, the women candidates that I’ve helped to get elected to office, but I can also learn from my students.”

The New Orleans native, who makes regular appearances on CNN and ABC News as a political analyst, began teaching part time at the University of Maryland in 1993 while working as chief of staff and press secretary to Rep. Eleanor Holmes Norton, a Democrat from D.C.

“For me, that was such a key moment in my life, because every Tuesday night, I would leave Capitol Hill at 6:00 p.m. and my class was from 7 to 10 p.m.,” recalls Brazile in an interview with Diverse.

“I absolutely loved it.”

When Gore named Brazile his campaign manager in September 1999 and headquartered his campaign office in Nashville, Tenn., Brazile flew back and forth every week until the end of the semester so she could teach a course.

Over the years, Brazile has mentored dozens of students, helping them to land internships and their first jobs on political campaigns, where they’ve had a chance to gain hands-on experience. She’s also a sought-after speaker on college campuses, making the rounds each week to two or three schools, where she forcefully defends President Obama’s policies.

Although Brazile is an unapologetic Democrat and vice chair of Voter Registration and Participation at the Democratic National Committee, partisanship has no place in her classroom.

“The topic of looking at women in politics is itself pretty amazing, but the opportunity to study with Professor Brazile is an added bonus,” says Mabel Rodriguez, a senior. “She doesn’t just focus on Democratic women — she talks about all women.”

With such a hectic schedule, Brazile receives help from her teaching assistant Kate McClellan, a former student who took her class two years ago.

“Professor Brazile’s class galvanized me to learn more about women’s issues and how they interact with politics,” says McClellan, a senior who has an interest in helping to elect more women to political office.

Even with an assistant, Brazile points out that she personally prepares her weekly class sessions.

“I do my own readings; I do my own lectures,” she says matter-of-factly. “I will spend Monday and Tuesday somewhere else, teach on Wednesday, fly out on Thursday and come back the following Tuesday.”

It’s that dedication that her students say is most impressive.

“She’s just so cool,” says Charlie Long, a junior who is majoring in government. “She has an engaging tone.”

Dr. Ruth B. Mandel, who directs the Eagleton Institute of Politics and is the Board of Governors Professor of Politics at Rutgers University, says that Brazile is a natural teacher when she’s interacting with students.

“Donna is a doer and a teacher,” says Mandel, who has invited Brazile to deliver several lectures for the Center for American Women in Politics, an entity within the Eagleton Institute. “Donna has done campaigns; [she] has had leadership in the party. Her students can’t hear about that kind of experience anywhere else.”

For so long, Brazile, Minyon Moore and Alexis Herman (who later became secretary of labor during the Clinton administration) were the most visible African-American female political strategists. Though others have since emerged, Brazile says that she’s sometimes frustrated by the slow pace of change.

“We’re constantly trying to pass that baton on to others to encourage them to take their seats at the table, even if they have to bring in a folding chair, to find their voice even in a whisper and not be afraid to do what we did.”

Teaching, she says, has provided her with another platform to reach the next generation waiting in the wings. Brazile says that she hopes other women consider trying their hand at teaching too.

“I think we bring diversity of opinion, diversity of experience,” she says. “We’ve actually been in the political marketplace. It’s one thing to read a textbook about what happened, but to bring that knowledge in the classroom for students is very potent and powerful.”