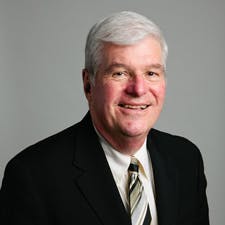 David Driscoll, chairman of the National Assessment Governing Board, said the lack of improvement in math and reading results over the last several years is “unacceptable.”

WASHINGTON ― In an abysmal showing, only about one-quarter of U.S. high school seniors performed solidly in math in a major assessment known as the nation’s report card, reinforcing concerns that large numbers of students are unprepared for either college or the workplace.

In reading, almost 4 in 10 students reached the “proficient” level or higher.

In both subjects on the 2013 exam there was little change from 2009, when the National Assessment of Educational Progress was last given to 12th-graders. The results, released Wednesday, come from a representative sample of 92,000 public and private school students.

The stagnation is “unacceptable,” said David Driscoll, chairman of the National Assessment Governing Board, which sets policy for the exam.

“Achievement at this very critical point in a student’s life must be improved to ensure success after high school,” Driscoll said.

John Easton, acting commissioner of the Education’s Department’s National Center for Education Statistics, said one possible reason was that lower-performing students who in the past would have dropped out remained in the sampling of students who took the exam.

In reading, the 38 percent share of students performing at or above proficient was lower than when the assessment was first given in 1992, when it was 40 percent. Scores have remained similar since 1994.

The student participants’ response to a survey about their educational experiences offers some clues to their performance.

Even as 12th-grade scores have stagnated, fourth- and eighth-grade students have made slow but steady progress on the exam since the early 1990s; most progress has come in math.

At all levels, there continue to be racial disparities.

These results did not include a global comparison, but U.S. students historically do poorly on international assessments compared to many global peers.

Education Secretary Arne Duncan said in a statement that, even though there has been some good news related to graduation rates and scores in younger grades, high school achievement has been flat in recent years.

“We must reject educational stagnation in our high schools, and as a nation we must do better for all students, especially for African-American and Latino students,” Duncan said.

The results come as community colleges and four-year institutions try to improve remedial education programs, given that only about one-quarter of students who take a remedial class graduate.

It’s estimated that more than one-third of all college students, and more than one-half in community colleges, need some remedial help, according to research from the Community College Research Center at Teachers College, Columbia University.

In addition to the national scores, 13 states voluntarily participated at a greater level and had scores reported.