Panel Finds Grounds for Impeachment Against U. of Texas System Regent 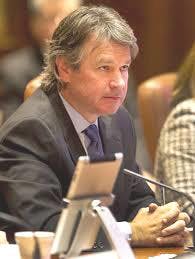 Wallace Hall, a University of Texas System regent, could be subjected to an impeachment trial. Only two have been successful in Texas history: Gov. James “Pa” Ferguson in 1917 and a district judge in 1975.

AUSTIN, Texas ― A Texas House panel on Monday found grounds for impeachment against University of Texas System Regent Wallace Hall over his relentless efforts to get the Austin flagship campus president fired, the initial step in what could be the first removal of a governor-appointed official in state history.

The House Select Committee on Transparency in State Agency Operations voted 7-1 on the motion and is scheduled to vote on specific impeachment charges later this month.

Those articles of impeachment would go to the full House for consideration. If approved, the Senate would conduct a trial.

“My efforts as a regent are to serve the interests of our great educational institutions, the students, faculty, and staff who make them great, and the taxpayers who fund them, not to appease a privileged class who abuse them,” Hall said in a statement after the vote.

There have been few impeachment trials in state history and only two have been successful: Gov. James “Pa” Ferguson in 1917 and a district judge in 1975.

“I do not fault him for having an agenda,” said Rep. Carol Alvarado of Houston, a Democrat and co-chair of the committee. “I fault him for the inappropriate means by which he continues to try to accomplish it.”

At issue is whether Hall, a Dallas businessman appointed by Gov. Rick Perry in 2011, abused the power of his office in his investigations of University of Texas President Bill Powers through massive open records requests that swamped university and system officials, and whether he violated state and federal student privacy laws or harmed the school’s reputation.

Powers testified before the committee in December, saying his battles with Hall had done “significant harm to our reputation in the academic world nationally and internationally.”

An investigation report for the committee says Hall may have broken the law. The Travis County district attorney’s anti-corruption unit has opened a separate criminal investigation.

Hall has denied breaking any laws and argued that all of his records demands and inquiries into Powers’ tenure as president fell within his responsibility as a regent charged with overseeing the system’s 15 education and medical institutions. Hall said his efforts probed political influence in university admissions, school fundraising and a law school loan program.

Hall is one of nine board members and isn’t the only one who has clashed with Powers over myriad issues, including tuition and graduation rates and the role of teaching and research in education.

But it has been Hall’s aggressive and relentless pursuit of records and his questions over Powers’ leadership that drew scrutiny from lawmakers. Powers has enjoyed broad support in the Legislature and from many prominent university financial donors.

Many of those top donors are members of the Texas Coalition for Excellence in Higher Education, which had called on Hall to resign.

“This is a somber day. No one is excited about a vote like this but it was, unfortunately, warranted. Our Coalition has been gravely concerned about the governance of our state’s public institutions, and today’s actions confirm our concern has been justified,” the group said in a statement.

Rep. Kyle Larsen, R-San Antonio, called on the board of regents to cast a “no confidence” vote in Hall and said Perry should ask for Hall’s resignation.

The regents meet Wednesday and Thursday on previously scheduled matters, including a potential tuition increase, an issue that has been a key dispute between Powers and the board in the past.

Perry, who is winding down 14 years in the governor’s office and is not seeking re-election, has said he supports Hall.

Alvarado said the board should have reined in Hall long ago.

“You have known about this behavior for quite some time,” she said in comments directed at the board. “To allow someone to bring down the university, much responsibility lies with the board of regents.”