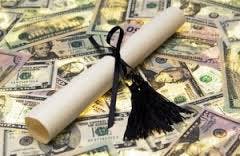 Shocked by the sticker price of college? The situation is more nuanced than first glance. As tuitions rise, so do the number of institutional grants to students. As a result, sometimes the “list” price of a college is not always the same as the “net” price.

The annual tuition discounting survey of private, nonprofit, four-year colleges conducted by the National Association of College and University Business Officers shows that many institutions are balancing the full price of college with institutional grants. The tuition discount rate for a first-time, full-time freshman hit a record 44.8 percent in 2012-13 and is projected to reach another record at 46.4 percent in 2013-14.

More significant to the institutions themselves, net-tuition revenue has not grown in the past 13 years. The study, released on Wednesday, showed that colleges have seen a net tuition growth of 0.4 percent on average and adjusted for inflation. The loss of tuition revenue puts a strain on institutions that have fewer alternative resources at their disposal.

Accepting more students to drive up tuition revenue is not a ready alternative for all: undergraduate enrollment was down at half of the 401 institutions that responded to the survey. Respondents at institutions that have lost freshman enrollment between 2010 and 2013 cite students’ price sensitivity, increased competition from public and private institutions, and changing demographics as top reasons for falling enrollments.

While the numbers overall are not good, some higher education officials believe that institutions are adapting positively to changing times.

“Every year when the NACUBO study is released, and in recent years at least, showing an increase in the discount rate and net revenues growing slowly if at all, analysts start talking about how the trend can’t continue and some private colleges will be forced to close,” said Donald Heller, dean of the College of Education at Michigan State University. “The message I take from the data is that these tuition-dependent, low-endowment private colleges are actually proving to be incredibly resilient in the face of challenging economic times.”

In the face of limited growth, colleges must find ways to control costs or find alternative revenue sources. “Whether it’s through operating more efficiently, or hiring more adjuncts and fewer tenure stream faculty, or by cutting back on building and amenities, most are managing to survive,” said Heller. “The challenge, of course, is to be able to implement this cost cutting while still offering a quality education.”

Some institutions are able to raise funds through sports events, bookstores, and even selling parking spaces. “There are ways to get creative, but it’s challenging. It’s going to be particularly challenging for those institutions that are tuition dependent,” said Natalie Pullaro Davis, author of the 2013 study.

Davis notes that, in 2012, 80.4 percent of institutional grant aid went to meet student need, a large increase from 72.1 percent of 2011. “Colleges and universities are trying to meet the needs of their students. They want to see them enroll and they want to see them stay and persist. It speaks to the commitment to students to help them bridge the gap.”

Looking to the future, Sean Tierney, strategy associate at Lumina Foundation, identifies two major demographic shifts to future enrollments at institutions of higher learning. “Population growth is unevenly distributed across the country, so that’s going to affect where students go geographically. The other big demographic shift is the changing racial and ethnic composition of students. It is a little less clear how that will affect enrollments.”

Heller said that African-American, Latino, and other first-generation students may not be aware of the difference between the sticker and net price of college. Without that knowledge, they may believe that college is out of reach for them financially.

“I think that colleges can probably do more to communicate the real, i.e., net price that students pay,” Heller said. “While they’ve stepped up efforts to do this in recent years, there’s probably still more that we can do. Part of this is not just relying on traditional marketing materials, but to also be sure that we are working with organizations like local college access networks and others that promote college access for first-generation students, to be sure that they have accurate information about the true costs of going to college, as well as financial aid.”