HARTFORD, Conn. ― The University of Connecticut on Thursday defended its decision to have former Secretary of State Hillary Clinton speak on campus in April for a fee of more than $250,000. 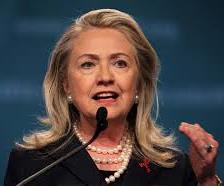 Hillary Clinton, who is considering a run for president in 2016, spoke for more than an hour to a group of about 2,300 students, faculty and staff.

Her April 23 appearance was part of the school’s Edmund Fusco Contemporary Issues Forum and was paid for by the UConn Foundation from a donation made by the Fusco family of New Haven.

“No taxpayer or tuition money was involved at all,” said Stephanie Reitz, a school spokeswoman. “It’s unfortunate and unfair to link discussions about college affordability and tuition to the desire of a private donor to have money spent in a particular way.”

The school, which will have a 6.5 percent tuition hike this fall, was criticized on talk radio, in newspapers and on social media after the fee of $251,250 was reported Wednesday by The Washington Post.

Former state Rep. Jonathan Pelto, an independent candidate for governor and frequent critic of the school, said it is misleading to say no taxpayer money was involved, because UConn subsidizes the private foundation.

He said the speech came at a time when the state is cutting funding to the public school and tuition is rising past the point of affordability for many Connecticut families.

“It is truly outrageous that UConn and its foundation would then divert scarce resources away from instructional costs to pay $251,000 for a speaker,” Pelto said.

The foundation said that, under terms of the Fusco donation, it cannot legally use that money for anything other than bringing scholars, leaders and policy makers to speak at UConn.

“Since 2000, the Foundation has raised more than $711 million for direct operational and endowment support at UConn,” said Josh Newton, the foundation’s president. “The Speaker Series is one of the many ways philanthropy benefits the university’s students, faculty, and staff, and we’re glad to be able to help provide events like Secretary Clinton’s lecture to our community.”

Clinton, who is considering a run for president 2016, spoke for more than an hour to a group of about 2,300 students, faculty and staff on topics ranging from Ukraine to student community service. The talk was not open to the general public.

She was the second speaker in the series. Author and historian Doris Kearns Goodwin spoke in 2012. The foundation declined to say how much she was paid. A website for the Washington Speakers Bureau, the lecture agency that arranges her appearances, puts her fee at more than $40,000.