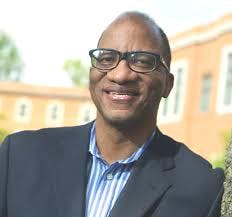 Journalist and author Wil Haygood credits Upward Bound with giving him the foundation to succeed in college.Nervous but determined, the 15-year-old boy walked into a conference room in Columbus, Ohio, for a fateful interview. If it went well, perhaps he’d have a chance to be the first member of his impoverished family to attend college.

That was 34 years ago, but Wil Haygood ― the renowned journalist and author whose writing inspired the film The Butler ― says he remembers it “like it was yesterday.”

“I knew in my heart and soul that this was a monumental moment for little Wil Haygood,” he recalled.

At stake was a place in Upward Bound, founded as an experimental program in 1964 as part of Lyndon B. Johnson’s War on Poverty, with a goal of helping students from low-income families get a college education.

A few weeks after his interview, Haygood received a letter accepting him in the Upward Bound college prep program taking place that summer of 1970 on the campus of Ohio Dominican University. “The college wasn’t but a few miles from our housing project, but as a poor kid, you never set foot there,” Haygood said. “It was as if I had been lifted up and taken to an oasis.”

Haygood flourished during three summers in the federally funded program and credits the professors there ― and their tough-love approach ― with girding him to succeed in college.

“They didn’t allow us to make excuses because we were Black or poor,” he said. “They said when you get to college, it will be 10 times harder.”

Haygood went on to thrive at Miami University in Oxford, Ohio, graduating in 1976 and returning last year to give the commencement speech.

“It’s a 50-year-old program that continues to pay back ― giving us hope, and teaching so many lessons along the way,” said Maureen Hoyler, president of the Council for Opportunity in Education. The nonprofit council, formed in 1981, represents more than 1,000 colleges and agencies that have supported Upward Bound and its affiliated programs.

One of the keys to Upward Bound’s success is that its local programs are conducted at college campuses, whether it’s after-school and weekend sessions during the school year or residential summer programs.

“The fact that we get to live on campus is really cool — it gives you an idea of what college is like,” said Ruthy Pierre, a 16-year-old New Yorker attending a second summer of Upward Bound. Her program is run by John Jay College of Criminal Justice and hosted during the summer by the College of Mount Saint Vincent on a verdant campus in the Bronx overlooking the Hudson River.

Ruthy, of American and Haitian descent, lives with her single mom and will be a junior this fall at Information Technology High School in Queens. She aspires to be a lawyer, but hasn’t ruled out a mid-career switch to being a chef.

Upward Bound, she says, “opens up opportunities we wouldn’t get otherwise.”

Among her 56 classmates in the six-week summer program was Corinne Lopez, 15, who hopes for a career combining her interests in graphic arts and forensic science. Her parents came to the U.S. from South America with college educations, but have struggled to find commensurate jobs in New York; Corinne’s father works as a doorman in Manhattan.

“It’s been hard for them,” Corrine said. “I’ve had everything given to me. I have to return the favor ― graduate, become successful and help them in the future.”

The summer program’s schedule is intensive, with classes and study halls filling most of the day on Mondays through Thursdays before the students go home for three-day weekends. Karen Texeira ― who’s directed the John Jay program for 25 years ― makes sure to include a few outings, such as this summer’s foray to Broadway to see “Motown: The Musical.”

She encourages the students to have fun amid all the hard work, though some rules are strictly enforced. There’s automatic expulsion, for example, for any boy or girl found in the dorm rooms reserved for the opposite sex.

Texeira’s second-in-command is counselor Omar Abdullah, 32, who grew up in Harlem, was an Upward Bound student himself in the late 1990s, and is now pursuing a master’s degree in public administration.

“Before I did Upward Bound, I was really shy ― too shy to place an order at McDonald’s,” he said. “At Upward Bound, you had to break out of that shell.”

“What I took out of it especially was the friendships. It’s like a family to us ― 24 hours a day, four days a week,” he said. “The last day of the program, kids are crying. Some of them don’t want to go home.”

Throughout its history, Upward Bound has compiled a strong record of success. Of the students who take part for at least three years, more than 90 percent go directly to college after completing high school.

That level of performance has earned Upward Bound strong bipartisan support in Congress, yet the program nonetheless faces fiscal challenges because of the broader turmoil on Capitol Hill.

The program’s budget, which started out at $6 million 50 years ago, reached an all-time high of almost $327 million in 2012, but was trimmed by about 5 percent last year along with many other federal programs. As a result, enrollment dropped to 75,996 students, down from an all-time high of 79,672 in 2012.

“How do you do more with less?” asked Maureen Hoyler, describing a budget-related struggle to recruit and train professional staff capable of overseeing the academic program and providing advice on how to get into college, pay for it, and flourish while there.

She said Upward Board’s role in college guidance has become increasingly crucial as many of the high schools supplying students to the program have cut back on their own guidance efforts.

“We want our students to make an informed choice,” Hoyler said. “We also want them to stay in college once they go. They need to be able to ask for help.”

As mandated by Congress, two-thirds of Upward Bound students must come from families with incomes at or below 150 percent of the federal poverty level and in which neither parent graduated from college. Some are homeless or live in group homes or foster homes, and about 75 percent are minorities.

Lois Vosika-Weir, who grew up in a low-income housing project in Minneapolis, is among many Upward Bound alumni with an abiding gratitude to the program. Her mother had four children by the age of 24 and was pregnant with a fifth when her husband deserted the family.

“I was not doing well at all in school,” Vosika-Weir said. “My mom found out about Upward Bound and basically had to drag me in there kicking and screaming.”

When she started the program as a ninth grader in 1974, she was reading at a fourth-grade level. Yet she was warmly welcomed.

“It sounds clichéd, but the adults met me where I was at,” said Vosika-Weir, whose voice cracked with emotion in a telephone interview as she recalled those days.

“The director said to me, ‘You’re smart.’ At the time I didn’t feel smart. … The people there gave me the confidence I needed to keep putting one foot in front of the other.”

The support never wavered, even when she became pregnant as a 16-year-old. She was accepted at the University of Minnesota, got her bachelor’s degree, went on to get a master’s degree in psychology, and now, at 55, is an assistant principal at the American Indian Magnet School in St. Paul. Her three children all have college degrees, including a son pursuing a doctorate in physics.

“Upward Bound was the catalyst,” she said.

Likewise, Haygood remains volubly grateful for Upward Bound, even to the point of choosing to write a biography of African-American politician/pastor Adam Clayton Powell Jr. in part because of the congressman’s role in establishing the program.

“I felt I owed this man a debt,” Haygood said. “If it wasn’t for that program, I never would have gone to college.”