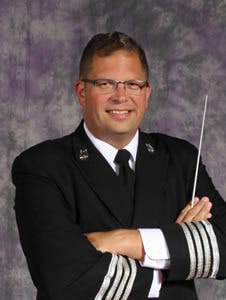 Jonathan Waters, who has served as director of the renowned band since 2012, is credited with revolutionizing its performances at halftime of the university’s football games.COLUMBUS, Ohio ― Ohio State University fired the director of its celebrated marching band on Thursday amid allegations he knew about and ignored “serious cultural issues,” some involving rituals where students were pressured to march in their underwear or participate in sexually themed stunts.

Jonathan Waters had led the band since 2012 and served in lesser capacities for a decade before that. His halftime shows for what’s known to fans as “The Best Damn Band in the Land” were considered revolutionary and drew millions of viewers on YouTube.

Ohio State President Michael Drake, on the job just three weeks, said in an Associated Press interview that he was “profoundly disappointed and shocked” by findings of a two-month investigation that began before his arrival.

The probe uncovered a “sexualized” culture inside the band and determined Waters knew about and failed to stop it. Email and phone messages were left for Waters and the band alumni association seeking comment.

“This is 2014, and we respect our students as young adults,” Drake said. “We respect women, and we respect all the different people who work with us, we respect that diversity. We just had to make a square-wave change between this report, which was unacceptable, and the future, which we start today.”

A spokesman said the university was required to promptly perform the probe under federal Title IX sexual discrimination laws, after a parent complained that band members were asked to swear secrecy oaths “about objectionable traditions and customs,” some in place well before Waters took over.

Those included a late-night march, described as optional, in which band members stripped down to their underwear. Investigators found band staff and directors, including Waters, had sometimes attended. One female student said more senior members of the band would warn newcomers to wear “fuller coverage” undergarments for the event; others wore pajamas or shorts, but some marched naked.

In the report, assistant director Michael Smith said he didn’t believe it when he saw it. An associate band director, Christopher Hech, said he recalled a student having alcohol poisoning at the event some years ago.

The report also described students earning sexually themed nicknames based on tasks other band members assigned them: One female student had to pretend to have an orgasm while sitting on the lap of her brother, a fellow band member, and others pretended to be sex toys, prostitutes or body parts.

Drake, the university’s first Black president, said he wants to see the band get beyond such activities and carry on its tradition of excellence.

“There are an infinite number of ways that people can bond that are not really demeaning and anachronistic,” he said.

The university has appointed former Ohio Attorney General Betty Montgomery to lead an independent task force assigned to review the matter, which will include representatives from Ernst & Young, the Sports Conflict Institute and outside counsel to provide guidance on Title IX compliance.

Waters started in the band as an undergraduate, playing sousaphone all four years during college. He graduated in 2000 and became a graduate assistant with the band, its assistant director and then interim director under Jon Woods, who retired after 25 years. Waters told an OSU Alumni Club gathering in Chillicothe in March his was “the greatest job in America.”

His firing was first reported by The Columbus Dispatch.

During his tenure, Waters revolutionized the band’s halftime shows through the use of iPads instead of paper, allowing students to morph into the shapes of horses, superheroes and dinosaurs galloping, flying and tromping across the field. Its technological advances landed the band in an Apple commercial in January. One performance in which the band takes the shape of a moonwalking Michael Jackson has more than 10 million views on YouTube.

Drake said band staff is working this week to carry the band season forward smoothly as a new director is found. Members of the 225-member band are scheduled to perform this weekend with the Columbus Symphony, in an annual event considered the unofficial start of its season.