Educators Find It Challenging Getting Through to Most Connected Students 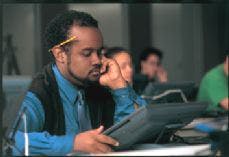 Changing technology and its ubiquity has had the greatest impact on younger generations of students. The reality is that the more connected, less attentive, and, perhaps, more entitled students of today are reflections of the rapidly changing society around them. For some students, they have never known a world without the Internet.

“I do notice a difference, having taught for 38 years,” says James D. McJunkins, an assistant professor in Clark Atlanta University’s Department of Mass Media Arts. “Now there’s more to distract the students, and it seems to be more of a challenge.”

McJunkins is not alone in his assessment.

Dr. Renae D. Mayes, an assistant professor and director of the school counseling program at Ball State University, says that, while students’ creativity and intelligence have not been hindered, work ethic is suffering and students require more “hand-holding” than past students have demanded.

“I think we’ve entered into an era now where just for showing up you get a reward, and so … instead of cultivating an individual’s strengths, we are rewarding mediocrity,” says Cameron.

Dr. Nicholas Hartlep, an assistant professor of educational foundations at Illinois State University, says the challenges of social promotion and grade inflation have added a new layer of challenges.

“Students, ironically, get really uncomfortable if they don’t get a high grade,” he says.

Hartlep says he believes the changes in attitudes are as much a shift in the culture of higher education as they are reflective of a generational cultural shift.

“As education has become more corporatized and become treated as a commodity, rather than a process, then … the customer, or the college student who is paying tuition, it becomes almost a sense of entitlement that the customer is always right,” he says.

With the consumer attitude of entitlement comes an expectation for instant gratification and a lack of appreciation for “paying dues,” says Allissa Richardson, a professor in the Department of Communications at Bowie State University, adding that this trend is unique to younger generations of students.

“These kids, they’re like, ‘I want to be managers tomorrow, and I want the most visible person’s job.’ … I have to constantly tell them [that] there’s an internship process you’ll have to go through; you have to do the grunt work. And they kind of frown and look at me like, ‘Well, how long is that going to take?’” she says. “They want to be rich really fast.”

Mayes agrees, saying the nature of social media and an online culture promote expectations of instant access and immediate satisfaction.

“I think this generation, they all want these really incredible and great things, but sometimes I find that what is lacking with that is [that] they don’t realize that you can’t just automatically start off at the top; you have to work,” she says. “And it may not be instant gratification and it may not be satisfying, but you’ve got to work at the ground level, in order to get at the top and stay at the top.”

Shortened attention spans and acclimation to condensed delivery of information, thanks to the nature of social media news delivery, mean that students are also reading less in general. This is having a profound impact on not only their ability to complete assigned readings, but also their writing ability, says Hartlep.

“A lot of times, students can’t really read, or aren’t really comfortable reading prolonged readings, because I think Internet reading has kind of altered their reading patterns,” Hartlep says. “We know that, to write well, you need to read a lot. So if the patterns are that students are reading less, it’s no surprise that the quality [of writing] would be reduced significantly.”

One almost counterintuitive consequence of a proliferation of technology and social media is that today’s students are having a more difficult time with interpersonal communications and establishing themselves as “real-life” individuals, say some educators.

“You’re focused on getting your own thoughts out,” Mayes says, but “you become all-consumed in you and you aren’t connecting with people in a genuine way.”

Richardson finds that students also struggle with a duality between wanting instant fame and public accolades and shying away from direct attention.

“It’s kind of interesting to see them … shrivel,” she says. “It’s a really interesting paradigm that they have that they are masters of creating an online social appearance that is happy and successful, but then, when it comes time to try to craft that same kind of presence in a career sense, they get very, very nervous and they still need us.”

One theme repeatedly expressed by some educators is that current students require more of a connection to the content and assignments.

“The material doesn’t change, but students come in now, and they go, ‘This isn’t interesting to me, so it’s okay if I don’t do well in it,’” says Cameron. “When I was in college, if you told me I had to take general chemistry to finish college, I didn’t have to know exactly why or how I was going to use it. I just did it.

“Now, you can’t just tell students that this is going to be important moving forward. You have to, right from the beginning, show them why it’s important.”

Despite the challenges associated with technology and its impact on younger generations, educators are still finding ways to connect and reach the students they teach.

“In order to keep their attention, I think the teaching style has to change in order to make them appreciate learning, because they have so much information coming at them from so many directions,” Richardson says.

Hartlep agrees, saying successful college professors in today’s climate have to learn how to “embrace and use technology as a learning tool, and not just as a social tool.”

“There has to be a lot more active engagement in the classroom,” says Cameron. “We have strategies to incentivize everything, even reading for class.”

Many professors, including Hartlep, are using more video, incorporating expert podcasts, and even Skyping experts and guest lecturers to give students new stimuli during the class session. Giving students an opportunity to engage online to find real-time information and news has been a successful tactic as well.

Richardson and Hartlep both abstain from lecture-style teaching in the classroom. For Hartlep, the “protected” class time is used more as a workshop. Richardson says she loads her lectures online for students to access at their leisure.

“When we come [into] class, that totally frees us up to have a discussion with the content in a deeper, richer way,” she says.

Cameron says students at Penn State are mainly taking their quizzes and exams online, which frees up several additional days of instructional time per semester.

There needs to be a shift to thinking of one’s self as a content provider whose imperative it is to make sure there is no “dead space” in the classroom, he says. Cameron admits, and most agree, though, that this approach is more time-consuming.

“The amount of preparation and lead time that you need to deliver a course well is much greater than it used to be,” says Cameron.

Cameron and his colleagues have started using “clickers” to allow students to answer questions in real time, which not only keeps students engaged, but gives him the ability to assess their understanding of the material in the present.

Richardson says that it is also imperative to connect with students on their level. Saying she binge watches TV during breaks from school to stay attuned to what students are seeing and talking about, Richardson advises, “Those cultural reference points can help them learn, if we use those examples in class.

“Sometimes my students will come in, and they’ll be like, ‘Did you see so-and-so on Love & Hip Hop was pregnant?’ And I’m like, ‘I don’t even know what that show is,’ but I can’t say that, because I’ll lose my credibility, so I’m just like, ‘Tell me more!’

“That also engages them to let them know, ‘Hey, I care about what you care about, if it’s going to help you learn,’” she says.

In some cases, Cameron says, adding peer-level learning assistants has helped to bridge the gap and help students relate better to the material.

“I think these questions of millennials … it’s kind of an age-old question that people before us have asked. I think when we drum around deeper, it’s not as big of an issue as we think it is,” says Hartlep. “We’re all human, for the most part; we haven’t evolved or changed all that much. … I think that they might be engaged differently, but they’re still kids, they’re still students.”

Eighty-six percent of Americans between the ages of 18 and 24 have social media profiles. Given that, it would be troublesome to believe professors are still ignoring not only the impact but the potential value of social media.

Most students are primarily reading news online, but many have shifted from default news sites like CNN.com to Twitter to discern the news of the day.

Undeniably, trying to fight a battle against social media, and technology in general, will prove unfruitful. So many professors are finding ways to leverage the media to enrich their lessons and engage their students.

“I have always been on Twitter and I encourage my students to use it,” says Mayes. “Part of their class participation [requirements are] to tweet, either tweet about what they’re learning in the classroom or tweet resources to each other.”

Richardson says she has begun using social media in lesson plans. Sometimes, she says, she will show students a relevant picture and ask them to create hashtags or memes that relate to the course content. Memes, she says, provide an excellent opportunity to teach satire as a learning tool.

“I engage them by putting them in the driver’s seat, saying this is what we’re going to discuss today, you’re going to find what’s relevant and I’m going to tell you what to do with it,” Richardson continues.

But despite the fact that technology and social media, for many students, are native platforms, this does not mean students are necessarily the best drivers.