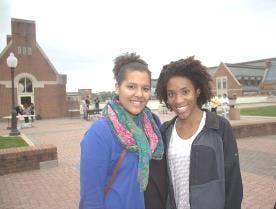 When they arrive, the management closes the store for three hours. ­Then, under the guidance of experienced stylists, the young women browse and pick out appropriate professional attire for their upcoming internship or post-graduation job. ­The cost of their shopping spree is borne by the retailer, whose president is the parent of a recent Georgetown graduate.

­The men get to shop, too. Once a year, a few dozen seniors receive gift cards to offset most of the expenses of picking up suits and accessories at Jos A. Bank.

­These students are members of the Georgetown Scholarship Program (GSP), which was formed in 2004 to enhance the college experience of first-generation and lower-income students.

But the students do a lot more than just shop. ­They receive generous scholarship packages designed to ensure that they graduate with no more than approximately $6,000 in college debt.

In addition to providing financial assistance, the program coordinators also provide academic assistance and devise strategies to help the students feel welcome, navigate the system, and fit in on a campus where 55 percent of the students are from wealthy backgrounds and can afford to pay the approximately $60,000-per-year tuition without flinching.

­The students also learn important life lessons that ensure their survival on the campus and beyond, such as budgeting and shopping for the best deals on items such as plane tickets, meals and textbooks.

Program Director Melissa Foy says the program was developed as part of a strategy to stay competitive with peer institutions by offering attractive financial packages to top students.

GSP creates opportunities to network with faculty, staff and influential alumni. ­The program also provides activities for students when they are unable to go home on breaks, and sometimes even offers financial assistance for family emergencies.

If it wasn’t for this program, says Colleen Roberts, a native of Bridgewater, N.J., and a rising senior majoring in government, attending Georgetown would not have been an option.

“I really love Georgetown, but it wouldn’t have been a smart decision financially,” says Roberts, a child of Guyanese immigrants who was also accepted to other prestigious schools such as Emory and Johns Hopkins.

Roberts, who spent the first six months of the year as an exchange student in South Africa, says she’s been impressed by the attractive range of opportunities afforded by the program, including a recent invitation to sign up to visit the White House.

Like Georgetown, several of the nation’s leading colleges and universities are developing programs to benefit first-generation and lower-income college students.

Officials of these schools say it is important that their schools not cater exclusively to students from wealthy homes. ­They say students are more likely to receive a well-rounded education when they learn from other students, particularly those from dissimilar backgrounds. ­The programs are not identical but they have the same objectives.

Duke University recently hired a director for access and outreach to coordinate the myriad of efforts on campus aimed at helping first-generation and lower-income students, according to Alison Rabil, assistant vice provost and director of financial aid at Duke.

The new director’s responsibilities, she says, will include coordinating workshops to introduce first-generation students to campus services and programs, hosting events that help them get to know faculty members in social settings, tackling social situations, buying textbooks, and working with faculty members and advisers.

While Duke doesn’t have a scholarship program similar to Georgetown’s, Rabil says the highest need students “are not borrowing to be here.”

Brown University’s Sidney E. Frank scholarship, which was established in 2004 through a $100 million donation by Frank, a member of Brown’s class of 1942, funds tuition for about 130 students.

­The selected students are talented and accomplished and have also demonstrated the greatest financial need, according to Dr. Maitrayee Bhattacharyya, associate dean of the college for diversity programs at Brown.

“The scholars are diverse in terms of racial and ethnic minority backgrounds, and many will also be the first in their families to earn a four-year college degree,” says Bhattacharyya.

She adds that the program hosts a range of events that help students get to know each other and build a sense of community, as well as connect them with resources such as the career office and such opportunities as study abroad.

In 2009, Wake Forest University established the Magnolia Scholars program for first-generation students. It is much smaller than the Georgetown program, accepting only 30 students each year. The students get much—or, in some cases, all—of their tuition paid for by a special endowment funded by alumni and friends of the university.

One alumnus, a first-generation college student, contributed $6.5 million to the fund. T. Nathaniel French, director of the Magnolia Scholars program, says the university’s target for the fund is $15.3 million. So far, $12 million has been donated or committed.

Beyond finances, “the biggest thing we add is support,” says French. “We make sure they are registered to study abroad. We introduce them to the career development office. We do aggressive career advising. We help them navigate the system. We help them find where their talents are. We help them get involved in different programs. It is by far the most diverse student program on campus.”

French says he’s proud of the fact that, in the five-year history of the program, only one student has dropped out for academic reasons. A few others have had to leave for personal or family reasons. The 2013 graduation rate for the scholars was 78 percent, French says. In 2014, the number rose to 90 percent.

Paige Horton, a native of San Diego who recently graduated from Wake Forest with a degree in English and creative writing, says attending Wake Forest would have been out of the question without the Magnolia program. Her mother, who has since died, was a cashier at Costco. Horton says the program gave her a sense of belonging.

“Not a lot of my friends outside [the program] understood what being a first-generation student meant,” she says. Regina Mundy, a rising sophomore who plans to major in computer science, says about 80 percent of the approximately $62,000 per year in tuition and room expenses is discounted through the Magnolia program.

But, Mundy says, becoming a student still took some getting used to. “The biggest adjustment was being a minority on a campus where many students pay full tuition and it is not breaking the bank,” she says, adding that many students think nothing of going out to eat every night even though they have meal plans and can easily afford the $300 to $500 it costs to park on campus each year.

“A lot of students have Range Rovers, BMWs and Mercedes’,” Mundy adds.

She says the scholars program has encouraged her to get involved in campus activities, such as the women’s rugby team and the gospel choir. Mundy says the program has helped broaden her understanding of the workings of departments like financial aid and study abroad.

At Georgetown, Foy says the program has grown significantly in the 10 years since its founding. Fifty students were accepted into the program in 2005. Today there are 600 undergraduates enrolled. The students in the program are selected upon admission and may be nominated by alumni, admissions or financial aid officers.

Because of the nature of the targeted groups, the students tend to be diverse and are also more inclusive of White, first-generation and lower-income students.

For instance, the Georgetown program is 30 percent White, 30 percent African-American and 30 percent Latino, according to Foy. Native Americans and people of Asian descent round out the balance.

“The focus is shifting from minority-based resources, because people realize there is a misconception about who has access to opportunity,” says Foy. “First generation is not as obvious as ethnicity. For low-income students, the barriers are starker than they once were.”