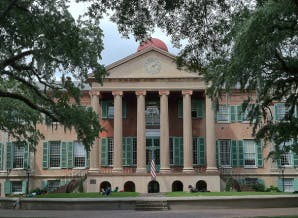 College of CharlestonWith the aim of boosting undergraduate racial diversity at the College of Charleston, university administrators are expected to complete a pilot program plan within the next few weeks that will guarantee admissions to the top 10 percent of graduating high school seniors from three counties in the Charleston metropolitan area and possibly a few others. The Charleston-based public university would likely implement the plan to coincide with the enrollment of its fall 2015 freshman class.

The College of Charleston community has borrowed the diversity admissions percentage plan idea from states, such as Texas and Florida, which have implemented them to boost the presence of underrepresented minorities and low-income students at public colleges and universities. The university will test the feasibility of its percentage admissions plan with students attending high school in Berkeley, Dorchester and Charleston counties, and other counties in the rural Lowcountry region of South Carolina.

“We’re very much in the process of completing a more detailed review, and of getting something ready to go that would make good sense for us to be launching during the current month if the review goes smoothly,” said interim Provost Brian McGee.

Last month, newly appointed university president Glenn McConnell announced the pilot program proposal, which was initially developed by a commission of administrators, faculty and students under the leadership of former College of Charleston president George Benson.

“President McConnell and I are very much trying to complete the internal review process and have made it known that we think this is a great faculty-, student- and staff-led idea for the institution,” McGee explained.

One purpose of the pilot program is to help College of Charleston officials determine whether the institution could establish a top 10 percent admissions plan extending to all public high schools in South Carolina. Over the years, the university has garnered criticism for its recruitment of out-of-state students, which some say is a significant factor in why minority enrollment is only 15 percent and Black students make up just 6 percent of the student body. South Carolina’s African-American population is 30 percent of the state.

“My read … is that the faculty [is] committed to finding solutions that are effective, that will work and that will broaden in multiple ways the diversity of our campus,” said Todd McNerney, the faculty senate speaker and an associate professor in the theater and dance department.

“I personally have a lot of desire to see that occur, and I also believe that there’s a real strong campuswide commitment to that,” he added.

McNerney said the Faculty Senate, as well as key faculty committees, are consulting with the administration on helping to shape the final plan of the pilot program. He noted that in the most recent Faculty Senate meeting, it was said the admissions program could be amended to guarantee admissions to fewer than 10 percent of South Carolina public high school graduates should it ever be expanded to the entire state.

“We wouldn’t want a statewide program to overwhelm admissions at the College of Charleston, given that we have virtually no capacity to expand enrollment,” he said.

Talim Lessane, the director of Upward Bound and Pre-College Programs at the College of Charleston, said that many of the high schools in Charleston, Dorchester and Berkeley counties are majority Black and that the school’s outreach programs have had success with attracting accomplished Black students from Charleston County high schools.

“We know that Charleston County students can do well here,” Lessane noted.

The appointment of McConnell, a former lieutenant governor and Republican state legislator, as president met heavy criticism and protest given that he was a well-known Civil War re-enactor and had defended the display of the Confederate flag at the South Carolina statehouse. In addition to supporting the pilot program, McConnell donated $110,000 from his dormant political campaign fund to the College of Charleston for minority scholarships.