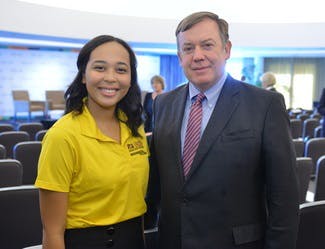 Philanthropic organizations, including the Lumina and the Bill and Melinda Gates Foundations, have committed $5.7 million to support UIA’s work and UIA universities are expected to match that investment with institutional funds. Organizers say the UIA’s intent is to develop a national playbook of ideas and proven interventions that will prove particularly beneficial to low-income and first-generation college students.

“While all postsecondary institutions have a role to play in raising college graduation rates, research universities in particular can be leaders in improving social and economic mobility in three ways: by serving a large proportion of low-income students; by modeling for other institutions the practices and commitment necessary to succeed; and by applying intellectual and research capacity to the issue, as they do to other significant social and scientific challenges,” according to the UIA’s “vision and prospectus” report released last week.

Dr. Michael Crow, president of Arizona State University and the UIA chairman, has characterized the push to build collaboration among institutions accustomed to competing against other schools as one that should lead to meaningful innovation. “These universities have been competing against each other…and we’re not getting to where we need to be,” Crow told an audience in downtown Washington last week.

Purdue University president Mitch Daniels described the alliance as an opportunity for the Indiana-based university while relying on “purposeful innovation” to become a better institution. “We’re going to have to embrace an ethic of student success on our campus that says we want to take more students; we want to have a more diverse population of students; and we’re no longer here to weed them out as historical legend has it. We are here to help them succeed and accept that that is part of our responsibility,” Daniels said last week at the UIA announcement.

Dr. Michelle Asha Cooper, president of the Washington-based Institute for Higher Education Policy, said the UIA’s formation is a positive development in that its efforts “are going to help increase access and help increase success for underserved students.” She said the project success will result in how well its programs achieve results for the most disadvantaged students. “I think what’s going to be most important here for the University Innovation Alliance is not how big their effort is but how targeted their effort is. It’s going to have to target students who are in need,” she cautioned.

The move by the schools to create the UIA springs partially from higher education analysis that has found public research universities failing to respond to the nation’s higher education crisis. Public research institutions have been criticized for restricting enrollments and encouraging the use of student aid dollars on merit awards rather than increasing enrollment and investing more in low-income students.

New America Foundation education policy analyst Rachel Fishman, a co-author of “The Next Generation University” report, praises the UIA effort for taking a collaborative approach toward achieving recommendations that had been included in the influential 2013 New America report. Among its recommendations, the report advocated increasing university enrollments to ensure broad access, testing new ideas from pedagogy to student services and serving growing populations. The report also urged that a national demonstration program be established that motivates four-year public higher education institutions to innovate.

“What I think is great about the University Innovation Alliance is that it’s going to try and take what has worked really well at one university and translate that effort to another campus and see if that effort actually takes hold,” she said.

Earlier this week, a prominent historically Black college and university leader expressed disappointment that UIA planners had not selected an HBCU to be part of the alliance. Dr. William Harvey, president of Hampton University and chair of the U.S. President’s Board of Advisors on HBCUs, said Monday during a speech to an audience of HBCU presidents and administrators in Washington “that the complaint is not that this alliance is seeking to serve low-income, minority and first-generation students” but that “the alliance does not include any HBCUs — the experts that have been serving this population for over a century.”

“The fact that not one HBCU was included in this alliance is appalling.  HBCUs were serving first-generation, minority and low-income students when some of these institutions were denying their entry or were not even in existence,” he said. “It seems to me that if the participating foundations are interested in securing expert data, they should consider funding an alliance of 10 to 12 HBCUs that have been doing this work for years.”

In addition to Harvey’s complaint, Lezli Baskerville, president and CEO of the National Association For Equal Opportunity in Higher Education (NAFEO) disclosed Wednesday that she has asked to meet with USA Funds president William Hansen to “discuss a variation on the proposed funding approach that would have the University Innovation Alliance funders invest in 11 HBCUs that are having the greatest successes in educating disproportionate percentages of low-income and minority students, especially in growth and high need disciplines.” The Indianapolis-based USA Funds organization is one of the UIA funders. NAFEO represents HBCUs and predominantly-Black institutions in Washington.

Bridget Burns, the UIA executive director, said that while alliance members will focus on developing and spreading best practices among themselves in the earliest stages of the project the UIA will be open to collaborating with higher education institutions, such as HBCUs and Hispanic-serving schools.

“We’re not the only ones doing this work. There’s a lot to be learned in this space and we’re really excited to engage in conversation with different universities and other institutions. We’re just getting started,” she said.