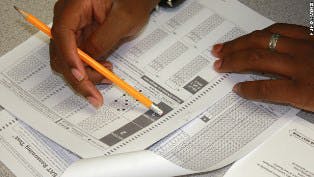 Cognizant of the fact that this year’s SAT results reveal the same troubling trends as in years prior, College Board officials called for a greater emphasis on boosting preparedness for the growing amount of minority students who take the college entrance exam.

“The latest SAT results reaffirm that we absolutely must address the issue of preparedness much earlier and intervene in a much more focused way than we have in the past,” Cyndie Schmeiser, Chief of Assessment at the College Board, said of the results released Tuesday.

This year’s results show that more students took the exam in 2014 than ever before, as did a higher percentage of minority students and those who qualified for fee waivers. Specifically, 1.67 million students from the class of 2014 took the SAT, an increase over the 1.66 million who took it last year.

Despite the fact that the greater proportion of minority students and students from families of lesser economic means took the exam in 2014, any enthusiasm over the increases in participation must be tempered by the fact that less than half of all SAT takers met the exam’s “college and career readiness benchmark.”

Only 42.6 percent of SAT takers in 2014 met the benchmark, which the College Board identifies as a score that signifies that students are ready to take college-entry, credit-bearing courses and not need remediation.

The problem is more severe among groups that are considered “underrepresented minorities,” as evidenced by the fact that only 15.8, 23.4 and 33.5 percent of African-American, Hispanic and Native American SAT takers, respectively, met the benchmark.

During a recent conference call, College Board officials indicated they are loathe to simply keep reciting statistics that show the longstanding trends, and instead placed emphasis on the need to do more than just make their tests available to students, but rather to get students in a better position to do well on the tests.

“It’s time to do something about it,” said David Coleman, president and CEO of the College Board. “Offering the same old tests in the face of lasting problems is just not good enough.”

This year is the first year that the College Board released the results of the SAT in tandem with Advanced Placement exam results as well as results from the Preliminary SAT/National Merit Scholarship Qualifying Test, better known as the PSAT/NMSQT.

The idea, Coleman and other College Board officials said, is to use the results from the various items together in order to get a clearer picture of the academic preparedness of students so as to figure out how to optimize student performance on the various exams.

“If we are going to together move the numbers and make a difference for students, it will take these programs interacting at their most powerful and together to propel students forward,” Coleman said.

The PSAT/NMSQT results show that, for the class of 2014, roughly 685,000 public school students were identified as having “AP potential” when they took the PSAT/ NMSQT.

Of those students, 61 percent ultimately took at least one matched AP exam during high school, but the remaining 39 percent did not take a matched AP course despite showing the potential to succeed in one.

“These are missed opportunities that we must address,” states a College Board report that outlines the results.

Five percent of such students were “on target” for college and career readiness in their junior year but “fell off target” by the fall of their senior year, the report states.

The report also says 9 percent of the 1.67 million SAT takers who graduated in 2014 were “close to meeting the SAT Benchmark.”

“With additional instructional support at the start of their senior year, they could likely have been college and career ready by the time they graduated from high school,” the report states.

The report also states that the percentage of students who succeeded in an AP exam has nearly doubled since 2004 from 7.6 to 13.2 in May 2014.

“Although there has been growth in participation across all groups, gaps continue to persist,” the report states. “For example, only 12.9 percent of African American and 12 percent of Native American public high school 11th- and 12th-graders took an AP exam in May 2014.”

The percentage of high school juniors and seniors who used a fee reduction to take the AP exam has also doubled over the past decade, from 11.8 to 24 percent, the report states.

The College Board says success on the AP exams is associated with higher rates of on-time college graduation. Students who achieve a score of 3 or higher on the 1-to-5 point scale can potentially earn college credit and thereby save money on college tuition.

In order to increase the number of minority students who take AP courses and exams, the College Board announced a series of initiatives, including All In, which is an effort to ensure that every African-American, Hispanic, and Native American student identified as being “ready for rigorous work” is able to take an AP course or another advanced course.

One African-American freshman at Cornell University told Diverse that, if he had taken such courses in high school, he would have been on better footing in college, particularly his chemistry class.

“Many students in my class are coming from college-level chemistry courses while they were still attending high school so the class is very competitive,” the student told Diverse via e-mail. “I feel as if I have to catch up in regards to the other students.”

He said that, compared to a lot of other schools throughout the nation, his high school didn’t focus on college-level courses in chemistry and physics.

“Many of the students here already took advanced chemistry and therefore are ready for the level that they expect here,” the student said. Still, he tries to keep a positive outlook. “I can honestly say that I will continue to work hard at it and hope to achieve a good grade.”