Department of Education Criticized for Not Using Accreditor Sanction Data 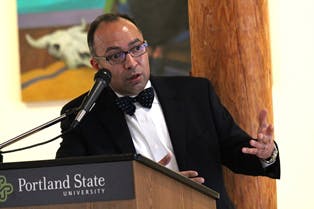 Barmak Nassirian, director of Federal Relations and Policy Analysis at the American Association of State Colleges and Universities, says accreditors are “confused by questions of academic quality.”
As the U.S. Department of Education continues to pursue its unwieldy consumer-focused project to establish a college ratings system, a new government report blasts the department for its routine failure to make use of accreditor sanction data already at its disposal.

Department of Education officials shot back to the GAO during the course of its investigation that analyzing the sanction data “would be too time- and labor-intensive.”

“In particular, they state that to be of any value, an analysis of accreditor sanctions would have to examine the reasons behind the actions,” the GAO report states. “According to Education officials who oversee accreditors, the department does not have the resources to undertake this effort.”

But reviewing such data could help the department identify which institutions from among the more than 6,000 that participate in federal student aid programs should be among the 300 that the department reviews each year, states the GAO report released late Monday.

Currently, accreditors tend to clamp down on institutions with poor financial health as opposed to those with poor academic outcomes, the report found. The law forbids the Education Department from telling accreditors how to assess academic quality.

Barmak Nassirian, director of Federal Relations and Policy Analysis at the American Association of State Colleges and Universities, says those findings show the “upside down world” in which institutions of higher learning exist.

“The study shows the accreditors are so unsure and so confused by questions of academic quality that they have decided to take the accounting path out,” Nassirian said. “Who they end up penalizing and issuing adverse judgments about is whoever doesn’t have enough money in the bank to fight back.”

The GAO report does not name institutions or get into specifics about why an institution ran afoul of accreditors. Rather, the report deals with types of sanctions—from probation to termination of accreditation—and breaks the frequency of sanctions down by higher education sectors: for-profit, public and nonprofit schools. It examines a four-and-a-half-year period that spans from October 2009 through March 2014.

Spokespeople for the Association of Private Sector Colleges and Universities—the main trade group for the for-profit college sector—were unavailable for comment Tuesday.

The report states that almost half of the 186 schools that received warning sanctions were public, even though public schools constitute just 32 percent of all schools that participate in federal student aid programs.

The report found that not all accrediting agencies impose the same types of sanctions to the same degree.

National and regional accreditors also differed in the reasons for their sanctions.

Even though accreditors forward their sanction information to the U.S. Department of Education, the department stores it in a database the department created for the public to identify accredited schools in the wake of a 2004 GAO report on “diploma mills.”

The sanction data is not, however, routinely sent to analysts at the department.

“Because Education does not consistently use accreditor sanction data in its oversight of schools, it may miss opportunities to identify and respond to school weaknesses that could put students and federal funds at risk,” the report states, noting that tens of billions of dollars in federal student aid is at stake–$136 billion in fiscal 2013, for instance.

“Clear guidance on how its analysts should consistently review, record, and respond to accreditor sanctions could enhance Education’s monitoring and oversight of schools,” the report states.

• To ensure that accreditors are “reliable authorities on educational quality,” possibly through developing a legislative proposal to expand its currently limited authority to assess accreditor standards. (Current law does not allow the federal government to say how accreditors should assess academic quality—in part, experts say, to maintain academic freedom from federal bureaucrats and elected officials.)

• To determine how to “consistently leverage available accreditor sanction data for oversight of schools to ensure it can systematically prioritize sanctioned schools for program review.”

• To “draw upon accreditor data to determine whether accreditors are consistently applying and enforcing their standards to ensure that the education offered by schools is of sufficient quality.”

Mahaffie only partially concurred with the recommendation to potentially develop a legislative proposal to ensure that accreditors are “reliable authorities on educational quality,” saying that the department intends to “evaluate” existing accreditor standards as it formulates its recommendations regarding HEA reauthorization.” Mahaffie added that the department will “consider” whether it can make additional use of student achievement data in its procedures for review of accrediting agencies, “understanding that the HEA and its implementing regulations currently do not supply any measure of the effectiveness of accreditor standards other than individual institutions meeting their stated objectives.”

Nassirian, of AASCU, said the GAO recommendations do not go far enough.

“We need better gatekeeping,” Nassirian said, arguing that accreditation—despite critiques that it stifles innovation—is good at moderating the influx of newcomers, most of whom Nassirian said may see themselves as innovators but ultimately fail.

Asked if the Obama administration’s proposed college rating system would help accomplish better gatekeeping, Nassirian said the envisaged system would fail to do so because it takes the “spectator position” and relies on “post facto” judgments of institutions.

“What happens to students who were ripped off by schools you let in?” Nassirian said.