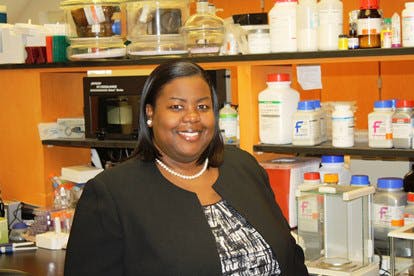 Since joining the faculty at the University of Maryland Eastern Shore (UMES) School of Pharmacy in 2010, Dr. Patrice L. Jackson-Ayotunde, a Diverse 2015 Emerging Scholar, has won recognition for exemplary research and teaching. Last May, the Office of Technology Commercialization at the University of Maryland, College Park presented Jackson-Ayotunde, a recent UMES pharmacy school graduate, an Invention of the Year Award recognizing the research the pharmaceutical sciences professor has led in developing medication to treat epilepsy. In addition, Jackson-Ayotunde’s fellow faculty members selected her for the UMES Promising Scholar Award last year.

In a few short years, the Memphis, Tennessee native has not only managed to win research and teaching awards, she’s also proved adept with handling her share of the heavy administrative and faculty service workload she’s taken on as one of the pharmacy school’s founding faculty members. ­The UMES pharmacy school was established in 2008 and enrolled its first cohort of professional pharmacy students in 2010.

“In a new program, you have to develop your syllabi; you have to help develop the [school’s] infrastructure, whether it be the technology or the policies and procedures. … There’s just more [work] involved for any individual faculty member,” says Dr. Kathy Webster, a former associate dean for academic affairs and assessment at the UMES pharmacy school.

Webster, who is currently a professor and the founding dean at the Keck Graduate Institute School of Pharmacy, worked closely with Jackson-Ayotunde during the assistant professor’s first three years at UMES.

The veteran pharmacy school administrator says Jackson-Ayotunde was “unique as a faculty member in that she brought both a scientific rigor, in terms of her research, but also a great deal of caring and energy directed at the students” in the program.

“She was able to be productive with her research from the very beginning and involve pharmacy students who were successful. She did an excellent job in developing her own research as well as involving students in that research,” Webster says.

The research that won recognition for Jackson-Ayotunde and her former pharmacy student research assistant is part of the long-term focus she’s had on epilepsy treatment, which dates back to her graduate years at Tennessee State University.

University of Maryland, College Park officials recognized the potential of a dozen compounds identified by the Jackson-Ayotunde team to potentially treat epilepsy with limited-to-no-observed neurotoxicity.

Dr. Miguel Martin-Caraballo, an assistant professor of pharmaceutical sciences at UMES, has been one of Jackson-Ayotunde’s teaching partners in pharmacy program courses and notes that her research provides a valuable opportunity for both professional pharmacy students and undergraduates in STEM fields.

It’s “very important to offer those opportunities to the pharmacy and the undergraduate students and the possibility of meaningful research,” especially for undergraduates who want to attend pharmacy or medical school, he says.

Jackson-Ayotunde’s generosity as a teacher and researcher mirrors the mentoring and nurturing she received as a college and graduate student.

From an early age, Jackson-Ayotunde, the eldest of five children in a working-class family, enjoyed science and had dreams of becoming a pediatrician.

When college time came around, Jackson-Ayotunde attended LeMoyne-Owen College and developed, with the help of LeMoyne-Owen and University of Tennessee Health Sciences Center faculty members, an interest in medicinal chemistry.

“From there, that’s the path I took. I knew that I wanted to do medicinal chemistry. I knew I wanted to be part of a department of pharmaceutical sciences,” she said. “And I wanted to spend my career designing and developing potential drug agents for different diseases and disorders.”

With a solid research, teaching and service record, Jackson-Ayotunde is “on the tenure track” at UMES, noting “that I do hope to be evaluated within the next year” to become an associate professor.

Colleagues such as Martin-Caraballo express admiration at the dedication and persistence of Jackson-Ayotunde, who is known to work well into the evenings and on weekends year-round to complete her work.

“­This is who I’ve been ever since I was young,” she says. “… I’m passionate about what I’m doing, and I think that’s the reason I’ve been blessed because I really do give it my all.”