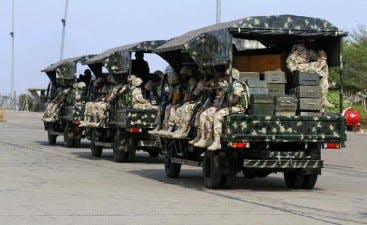 Even though the cellphone shutdown imposed by the Nigerian government in the summer of 2013 was meant to combat Boko Haram, the cellphone blackout did more harm than good.

That proposition comes from Jacob Udo-Udo Jacob, a digital journalism professor at American University of Nigeria and author of a forthcoming paper on a 2013 cellphone blackout that the Nigerian government imposed to counter the Islamist insurgent group.

The paper, which is being published next month in Stability: International Journal of Security & Development, says that, while more insurgents from Boko Haram were captured or killed during the cellphone blackout and attacks were lessened, the blackout may have ended up helping Boko Haram.

“While the shutdown helped reduce Boko Haram attacks in the short term, it did inspire the sect to make the important strategic move of relocating members to the Sambisa forest,” the paper states. “Moreover it fundamentally altered the nature of their operations, resulting in a more closed, centralized system rather than the previous open, cell or networked system.

“While the mobile phone blackout helped checkmate Boko Haram in the short term, it forced the group to develop new coping strategies and to evolve.”

The paper notes that more insurgents from Boko Haram were captured and killed and that attacks from the group lessened during the cellphone blackout, which took place between May 23 and July 12, 2013, in Adamawa, Borno and Yobe—three states in northeastern Nigeria.

Specifically, the paper states, the Nigerian military captured or killed 1,956 insurgents during the period as opposed to 734 during the previous three months.

Also, whereas there were 52 Boko Haram incidents or attacks in the three months prior to the cellphone shutdown, during the shutdown there were only 26 incidents across the region, the paper states.

“There was also a reduction in deaths from Boko Haram attacks to 124 from 519 deaths in the previous three months,” the paper states. “But the blackout only achieved temporary results, as Boko Haram attacks and casualties increased when phone networks were restored.”

The paper also argues that the reduction in the number of Boko Haram attacks and the increase in the number of the group’s operatives who were captured or killed may have also been the result of “a range of factors other than the mobile phone shutdown,” such as higher troop deployments and “more precise aerial bombing of Boko Haram strongholds.”

Jacob’s paper comes at a time when Nigeria is headed toward general elections next month and while deadly attacks from Boko Harm make daily headlines.

Jacob said the constant threat of violent attacks from Boko Haram is not just a regional problem in West Africa but one that could have “disastrous” repercussions for Africa’s largest economy and a major U.S. trade partner.

“The mistake I think the international community is making is that they tend to see Boko Haram as a Nigerian problem,” Jacob said in a Skype interview with Diverse.

“The repercussions could be disastrous not only for Nigeria but also for the entire West African subregion,” Jacob said.

Jacob’s remarks stand in stark contrast to recent remarks by a military analyst that West Africa and Black Africa are simply “not a priority” for the United States even as deadly assaults there continue to mount.

On the contrary, Jacob said: “There are loads of U.S. economic interests in Nigeria.” He noted that Chevron, ExxonMobil and various other companies “operate very profitably in Nigeria.”

“Nigeria is Africa’s largest economy and a major trading partner with the U.S. and other Western countries—mainly Britain and France,” Jacob said. Indeed, 16.8 percent of Nigeria’s exports are to the U.S., and 10.1 percent of its imports are from the U.S., according to the CIA.

Jacob said journalists have a “critical role” to play in highlighting the threat of Boko Haram. It’s a view that has sharpened in recent weeks as some accused the media of a double standard for paying excessive attention to the deadly attacks by Islamic militants against staff members of the French satirical magazine Charlie Hebdo for making caricatures of the Prophet Mohammed, while largely ignoring a much larger massacre by Boko Haram around the same time in Baga, Nigeria.

But Jacob—who trains journalists to do “peace journalism” and conflict analysis—concedes that there are logistical challenges to reporting in Nigeria and that it’s “difficult” to access Baga.

He also said journalists may face not only threats from Islamist insurgents but also pressure from the government if their reports are deemed objectionable.

The remarks were in reference to concerns such as those raised in a recent report that says the Nigerian government has employed a “heavy-handed, overwhelmingly kinetic approach to dealing with the group and has paid little attention to the underlying contextual realities and root causes of the conflict.”

Jacob’s paper deals with the evolution of Boko Haram from a once peaceful group that espoused “pure Islam” to the violent entity that it is now as it seeks to impose strict Islamic law.

The paper also notes how the military still resorts to occasional mobile phone blackouts despite the fact that civilians have indicated how it hinders their ability to communicate with loved ones and has disrupted or killed business. Though security agents defended the cellphone blackout tactic, everyday civilians referred to it as “dumb,” according to Jacob’s paper.

The paper concludes that there is an “increasing need” for the United Nations to monitor government shutdowns of information and communications technology and to “intervene where necessary.”

Jacob said there are “loads of opportunities” for American academics to shine the light on issues that arise from the threat of Boko Haram, a group whose name means “Western education is forbidden.”

Asked if he felt like he might be a target as a scholar who has focused on Boko Haram at American University of Nigeria, which stands for everything that Boko Haram opposes, Jacob said: “Everyone feels we are a sitting target.” “

And what a target it would be for Boko Haram,” Jacob said. “A massive American flag stands tall in the gate leading to the university.”

But the institution has invested heavily in security, Jacob said, with a private security force of more than 600 individuals, bomb sniffing dogs and closed-circuit TV.

The school educates a fair number of low-income students, including, Jacob said, some surviving victims of the infamous 2014 Boko Haram kidnapping that led to the social media campaign: #BringBackOurGirls.

“It affords American academics the opportunity of working directly with people that need their experience and expertise the most,” Jacob said. “Besides, you see that you are making real change in the lives of real people. Basically, they are helping mold the next generation of African leaders.”