One of the central themes of this year’s League of Innovations conference was the need to soldier on despite a lack of funding. That theme reflects the clear-eyed view of some community college leaders who are not intimidated by increasing state divestment and increasing pressure on community colleges to be all things to all people.

“We seem to be at a rate of change that is accelerated and with what seems to be an increased number of expectations to be met by community colleges,” Dr. Gerardo E. de los Santos, president and CEO of the League of Innovations, said. “In just recent years, community colleges have been put under the spotlight, and it’s a wonderful thing. But at the same time, that spotlight brings about things that perhaps weren’t there before.” 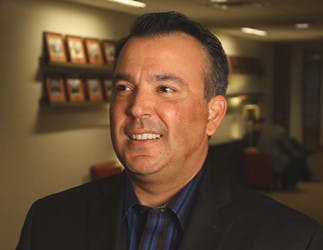 Dr. Gerardo De Los Santos, president and CEO of the League of Innovation, said community colleges “have been put under the spotlight.”

Increasingly, community colleges are being positioned as “saviors of the middle class” or “economic job engines” of their respective regions.

Yet as recent developments in states like Arizona show, some community colleges are receiving limited outside help to achieve the lofty ambitions being heaped upon them. While many investments by states have dwindled from covering a third of colleges’ budgets in decades past to less than 10 percent today, the governor of Arizona and the state Legislature made the unprecedented step of announcing that they would reduce state funding to the state’s largest community college systems—Maricopa and Pima—to zero, in early March.

“That’s not a new story. That’s been decreasing for decades,” de los Santos said of the situation in Arizona. “It was only a matter of time before we went from that one percent to zero, or pretty close to it, I should say.”

Though the blow may have been inevitable, it still hurts.

“When you take that kind of blow to your budget, that’s got to be difficult. Hopefully they’ll be able to find a way to effectively address those funds they’re no longer getting. That’s very unfortunate,” said Dr. Edward J. Leach, director of NISOD.

One particular pressure community college leaders identified is the conflict between the “access agenda” and the “completion agenda.” In other words, reconciling the historic mission of community colleges to provide access to all, and a newer impetus to ensure that students are leaving institutions with degrees or credentials—or at least transferring to a place where they can continue to work toward a degree.

At the same time there has been a push for completion; increasing numbers of students are arriving at community college academically underprepared, requiring substantial remedial education before they can start taking courses for credit.

De los Santos said that, at some community colleges, 80 percent of new students require remedial education in mathematics, and 70 percent of students at some colleges need remedial work in writing. That means that individual colleges are making a significant investment on students before they even begin to earn credits toward an eventual credential or degree.

“There are some serious conversations in some community colleges in parts of the country about the potential demise of developmental education,” de los Santos said. He noted that community colleges have substantial financial pressures to improve campus infrastructure and technological offerings of all sorts. At the same time, they need to keep tuition low. Something has to give at some point, and developmental education offerings may be pruned back at some colleges.

Still, at a Monday morning special session on “What’s in Store for Community Colleges,” Dr. Mark Milliron, co-founder and CLO of Civitas Learning, said that community colleges must be champions of the completion and access agenda alike.

The question is how to make the two complement each other better.

“One of the ways to ‘juice completions’ is to lower standards, and the second one is to just eliminate the ability of harder served students to come into the institutions,” Milliron said, acknowledging that neither were attractive nor even acceptable alternatives. Rather, community colleges need to look to partners in the K-12 sphere to better align the interests or turn to foundations for assistance in getting educational programs off the ground.