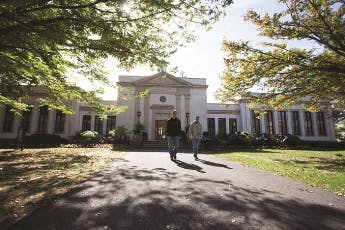 Delaware Valley College officially became a university this month with ambitious goals that extend well beyond its bucolic Pennsylvania setting.

DelVal, as it is known in its Doylestown, Pennsylvania, community, was recently approved as a university by the Pennsylvania Department of Education, fulfilling a strategic plan developed over about five years, according to Art Goon, vice president for enrollment planning and management. Goon says the transition “allowed us to add graduate and doctoral programs and to attract students who wanted to attend a university as opposed to a college.”

In addition, he says, as a college, DelVal had not attracted a large number of international students. “Now that we have become a university we are interested, in a strategic kind of way, in building niche programs, especially agriculture and environmental sciences, that will attract international students particularly from China and India,” Goon says. “There are a lot of American colleges and universities recruiting in China and India, but what sets us apart is there aren’t as many that have our expertise in agriculture and environmental science.”

As part of that goal, the university has partnered with one of its neighbors, Pearl S. Buck International, located in nearby Perkasie, Pennsylvania. According to its mission statement, “Pearl S. Buck International provides opportunities to explore and appreciate other cultures, builds better lives for children around the globe and promotes the legacy of our founder by preserving and interpreting her National Historic Landmark Home.”

The famed author, winner of the Pulitzer and Nobel Prize for Literature, lived much of her life in China and established the organization formerly known as the Pearl S. Buck Foundation.

Janet Mintzer, president and CEO of Pearl S. Buck International, says the partnership fits in well with her organization’s existing programs. For example, “We have three groups of high school students from China that we will be introducing to the United States and our culture later this month and in August. That will include bringing them through DelVal so that they can get a feel for the campus,” Mintzer says. For the university, it’s an opportunity to provide the students with recruitment information, and to have their own students and faculty interact with the visitors. Pearl S. Buck International works in six countries in Asia: China, Taiwan, South Korea, the Philippines, Vietnam and Thailand.

“One of the things our president [Dr. Joseph Brosnan] has done is to engage the local community and the region more with DelVal University,” Goon says. “This really is a very natural partnership because Pearl S. Buck International had name recognition, not just in China but in Asia. We asked them to help us recruit qualified students, and we formalized that relationship in February.”

He says the partnership also helps the university achieve greater diversity of students and faculty. “Our goal isn’t to increase our enrollment by a lot. We still want to remain relatively small, 1500 undergraduate students … but we want to diversify, and we do expect to add enrollment of graduate students.”

For Christi Smith, assistant professor of criminal justice and a 2000 graduate of the former Delaware Valley College, the transition to a university and its international outreach, “reflect growth in a variety of areas: academic disciplines, diversity of students, diversity of faculty and more opportunities for students, staff and faculty.”

She added, “As an alumna and faculty member, it gives me a very good feeling.”