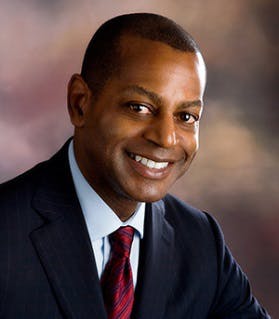 James WinbushUniversities are usually credited with being centers for progress in society, with the perfect combination of youthful optimism and the encouragement of the quest of knowledge. With a total student population of more than 110,000 among eight campuses, Indiana University is instrumental in setting the tone for progress in the state and the surrounding region.

With all of the attention lately on Indiana Governor Mike Pence signing the Religious Freedom Act, essentially giving business owners the option of not serving people who do not align with their own religious beliefs, the voice of IU and other colleges in the state are more important than ever.

Dr. James C. Wimbush is the Vice President for Diversity, Equity and Multicultural Affairs and the Dean of the University Graduate School at Indiana University. The goal of the DEMA office is to “foster an inclusive environment that promotes and nurtures diversity, broadly defined on all campuses of Indiana University.” This is accomplished by strategically focusing on three critical areas:

• recruitment and retention of faculty and staff, and recruitment, retention, and timely completion of undergraduate and graduate students;

• promotion of a welcoming and positive campus climate;

• engagement in outreach and advocacy locally and nationally.

I asked Dr. Wimbush about the vital role IU plays in diversity progress in the state, and where he sees initiatives heading in the next few years.

A: In Fall 2014, IU Bloomington witnessed a landmark event for the first time enrolling 1,042 new students who identify as Black/African American, Hispanic/Latino, American Indian/Alaska Native, Native Hawaiian/Pacific Islander or as multiracial. The number of African-American students increased approximately 7 percent and Hispanic students by 10 percent. We are seeing some progress, but recognize that there is much more to do.

Q: In 2013, IU joined Freedom Indiana to take a stand supporting same-sex marriage. Since then, the school has come out against Governor Mike Pence’s signing of the Religious Freedom Restoration Act. What important role do colleges and universities play in progressing society on issues like this?

A: Important societal concerns such as the one we faced last year create opportunities for the University to advocate for issues that might otherwise have a deleterious effect on our community and university. We feel it is appropriate and essential to take a stand on these types of issues.

Following Indiana Governor Mike Pence’s signing of the Religious Freedom Restoration Act, IU’s President Michael A. McRobbie released a statement reaffirming the university’s commitment to hiring, promoting and educating without regard for age, race, gender, gender identity, sexual orientation or other often-discriminatory factors. That statement also urged state lawmakers to take another look at the RFRA and to reverse its discriminatory stance. My office firmly stands behind President McRobbie’s statement and plans to keep IU moving toward greater progress for the entire state on these and other issues of equality.

Q: Is being positioned in the Midwest helpful or hurtful to diversity? How do you make a predominantly white institution like IU more diverse, year by year?

A: We are always looking at recruitment opportunities within and outside the state of Indiana to try to attract a more diverse student, faculty and staff population. We do this in a number of ways including participation in recruitment fairs and building and nurturing relationships with our external partners. While recruitment is a responsibility of the Office of Enrollment Management within Indiana University, we work closely with them to help support their efforts. We have been working with schools and school systems to create a pipeline from K-12 classrooms to Indiana University.

Q: What diversity/multi-cultural initiatives are in the works at IU?

A: We have a number of initiatives underway that we are excited to share that include increased funding to our Group Program that assists low-income, first-generation students. The program has been in place since 1968 and used to be funded one year at a time; that has switched to four years at a time. We are also developing a program in conjunction with Indianapolis Public Schools to streamline K-12 students to the campus of Indiana University. We are also continuing to cultivate our relationship with the nationally renowned Stax Music Academy of Memphis that trains middle-school and high-school musicians through after-school and summer camp programs. We have already seen applications to IU for fall 2015 admission from this initiative.

We are also currently expanding our network of historically black colleges and universities (HBCUs) and Minority-serving institutions (MSIs) to enhance recruitment. We have recently added the GLBT Support and Services Center as one of our culture centers within my office. This past academic year we held highly successful diversity-oriented receptions at IUPUI and all the regional campuses. Attendance comprised of campus and community constituents.

We place tutors in all the culture centers, which include tutoring sessions on evenings and weekends. We will continue radio and digital campaigns targeting underrepresented populations in central Indiana and the communities where IU campuses are located. We are beginning a collaboration with the Maurer School of Law for qualified students in Office of the Vice President for Diversity, Equity, and Multicultural Affairs programs who are interested in a law degree to receive pre-law mentoring from the School and, if admitted to Maurer, to receive substantially reduced tuition.