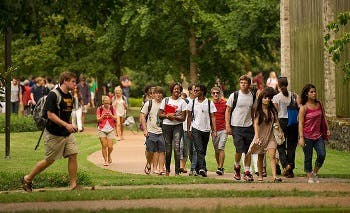 The persistence rate of college students has reached its highest point since 2010, when it began a four-year decline, according to a new “snapshot” report of persistence and retention rates released Thursday by the National Student Clearinghouse Research Center.

While each institutional sector saw similar increases in persistence rates, the largest increase—0.8 percentage points—took place at two-year public institutions, taking the percentage rate at those schools up to 57.6 percent.

The snapshot also found that:

“These improvements, however small, are good news for the education system,” said Doug Shapiro, head of the Virginia-based National Student Clearinghouse Research Center.

“We recovered some of the ground that was lost over the last few years and see more students persisting,” Shapiro said. “It suggests that students are entering college a little bit better prepared and that colleges are doing a better job of keeping them on a path to graduation.”

However, one higher education researcher said a more granular look at demographics is needed in order to know what factors are behind the slight uptick in retention and persistence.

“To really understand what’s behind the trends, we would need to dig more deeply into the data,” said Mamie Voight, Director of Policy Research at the Institute for Higher Education Policy, a Washington, D.C.-based research and policy organization.

“These more detailed data could show us who has experienced increased persistence and help us identify whom we must focus our efforts on to drive the numbers up further and faster,” Voight said.

With those caveats in mind, Voight said the increases in persistence may stem from some of the broader conversations about college completion.

She noted that, in recent years, governments, foundations and others have set completion and attainment goals to drive improvements.

“In the past, many higher education discussions have focused strictly on access to college, but, more recently, we have seen a shift toward an emphasis on completion as well,” Voight said. “This public discourse and attention from policymakers can affect both policy and practice and could be helping to boost the numbers.”

While the NSC report did not break down persistence and retention rates by race or ethnicity or socioeconomic status, it did look at persistence rates by age.