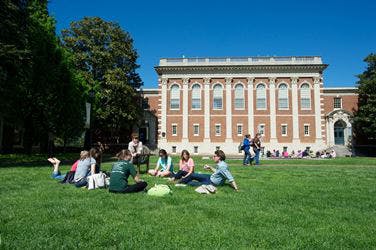 According to the Women’s College Coalition, 50 years ago there were 230 women’s colleges in the United States. After Sweet Briar closes, there will be 41.The closing of Sweet Briar College cast a spotlight on the diminishing number of women’s colleges, but many such institutions remain vibrant by keeping focused on changing student needs and economic realities.

On Feb. 28, 2015, the board of directors of Sweet Briar College, a century-old liberal arts institution near the Blue Ridge Mountains in Virginia, voted to close the college at the end of this academic year citing “insurmountable ­financial challenges.” The news shook not only the students, faculty and others associated with Sweet Briar, but the world of women’s colleges. Agnes Scott College in Decatur, Georgia, soon put out a statement on its website reaffirming its institutional strength and extending a welcome to Sweet Briar students.

A nonpro­fit group calling itself Saving Sweet Briar, Inc. is ­fighting the closure of Sweet Briar College. Last month, they announced that the group’s legal counsel found evidence that Sweet Briar administrators violated Virginia law and called for the resignation of interim president James F. Jones Jr. and members of the board of directors.

A forensic accountant hired by Saving Sweet Briar, Inc. to review the ­finances of Sweet Briar College completed an initial review in early April and found that, as of August 2014, the college’s ­ financial condition was stable and did not back the decision to shutter the college.

Hollins University in Roanoke, Virginia, about 90 minutes from Sweet Briar, is prepared to accept Sweet Briar students as of the fall term.

These colleges continue to see and invest in the mission of women’s colleges as places of learning and leadership development.

“At women’s colleges, they find their voices; they develop confidence,” says Hollins President Nancy Gray. “You could almost pick out a women’s college graduate in a crowd because of her self-con­fidence and clarity about standing up for what she believes in rather than trying to please people. It’s truly transformational.”

Women’s colleges came into existence and flourished in the 19th and 20th centuries as women sought higher education opportunities, which had largely been available only to men. In recent years, the number of single-sex institutions dwindled after many schools merged with men’s schools, went coed or closed. According to the Women’s College Coalition, 50 years ago there were 230 women’s colleges in the United States. After Sweet Briar closes, there will be 41.

Those that remain see themselves as places that provide the foundation for future leaders.

“In women’s colleges, you have all kinds of expanded opportunities for leadership development,” says Dr. Myra Burnett, interim provost of academic affairs at Spelman College in Atlanta. “At Spelman, you have the Bonner Scholars Program, the social justice program and other leadership organizations, and all of our student leaders are women.

“We have a very long history (of) preparing them for leadership in whatever their chosen careers are,” she adds. “We also have a very strong liberal arts curriculum, now with an emphasis on global experiences. For example, Spelman students now have many opportunities to study abroad, short term and long term.”

The Bonner Scholars Program provides a service-learning scholarship for students who demonstrate ­financial need and a commitment to community service. Students engage in ongoing service work throughout their four years of college.

Spelman has increased its international curriculum and has also done a greater amount of international recruiting, noting that students from abroad are interested in the unique environment of an HBCU. In response to scholarly interest, an interdisciplinary curriculum has been developed.

“It’s supporting the kind of learning that we think is 21st century learning—across disciplinary lines and using perspectives that are different from the single-discipline perspective,” says Burnett.

A huge attraction at Hollins is the Batten Leadership Institute, in which students can earn certificates in leadership studies that complement their major field of study. Community leaders are involved in mentoring.

In addition to the Batten Leadership Institute, Hollins has added a new honors program as well as adding new degrees, including a bachelor’s in environmental studies, according to the institution.

“Adding programs has been an absolute strategic objective in order to make us relevant as a women’s college in the 21st century,” Gray says.

Kiss says Agnes Scott has expanded opportunities related to global learning and leadership development and is in the process of launching a major initiative, Summit.

The college’s location within the metropolitan Atlanta area helps with internship opportunities for students at CNN, the Carter Center and the Centers for Disease Control and Prevention. They also offer dual-degree and joint-enrollment opportunities at Georgia Tech and Emory.

“We are constantly evolving,” says Kiss. “We have added nine new majors and minors.”

Among the new programs is a public health major, which has quickly proved popular. Neuroscience has been added as has business management. There is also an environmental and sustainability studies minor.

Ultimately, the crucial fact of remaining in existence is financial stability. As has been reported, Sweet Briar has an $84 million endowment, but was still besieged by debt. The aforementioned institutions indicate that each is very cautious in debt management.

In addition to traditional revenue streams such as tuition, Mills College in Oakland, California, is looking at expanding rental efforts to leverage unutilized space. The college has longstanding relationships with the Julia Morgan School for Girls and Middlebury Language Schools that have provided additional financial resources to support overall operations. The board is also exploring developing partnerships with nonprofits and organizations that can use available space.

Hollins undertook a financial strategy that included a major fundraising campaign that raised $162 million, with the goals of building the endowment and eliminating debt. Some funds went to renovating historic buildings.

“We successfully raised the money to eliminate debt and have operated for the last seven or eight years with no debt and will continue to do so, and we are continuing to raise money to build our endowment,” says Gray. The endowment has increased from $86 million in 2000 to $180 million today.

Kiss says Agnes Scott also has a very clear strategic financial plan that includes not taking on any long-term debt. The college funds its own capital projects, including renovation of a 52,000-square-foot building, which was done with donor funds.

“Part of our strategic plan is we want to increase the size of our enrollment,” Kiss says. “Summit is based on a strategic marketing study that showed that global learning and leadership development were the ways in which we could attract more students to Agnes Scott.

“We want to sustain our core mission as a women’s liberal arts college,” she adds. “In order to do that, we have to grow our enrollment and we also have to be good stewards of our financial resources—not go into excessive debt and not draw too heavily on our endowment.”

About 12 percent of Agnes Scott undergraduates are international students. There are students from 37 countries and 36 U.S. states and territories currently enrolled.

Spelman casts a wide net in its recruitment and invests in retention efforts to ensure that students stay for four years. A recently completed capital campaign at Spelman came to fruition ahead of its target of $150 million.

Decades of research have reaffirmed the benefits of women’s colleges. While there may be more college closings, most of the remaining institutions are poised to endure.

“As long as research continues to show that women are still underrepresented in the upper ranks of most fields and are underrepresented in selected other fields like science and math, strong institutions such as Mills are more important than ever in providing the opportunity for women to break through these barriers,” says Dr. Alecia A. DeCoudreaux, president of Mills College. “The Mills community remains passionately committed to women’s education and the liberal arts.”