When the mayor of Miami learned that the German Consulate General in Miami wanted to gift a piece of the Berlin Wall to the city, he knew where it ought to go — right in a central plaza at Miami Dade College’s Wolfson Campus in Downtown Miami. Consulting with Miami Dade President Dr. Eduardo Padrón he found immediate and enthusiastic support for the proposal.

“It was given to me as the mayor of the city, and I said to Eduardo that I thought that the best place for this piece of the Wall should be at Miami Dade College, because the students will be able to remember history,” Miami Mayor Tomás Regalado says. 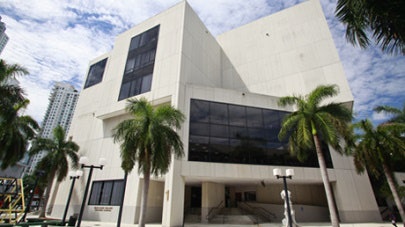 “It’s a constant reminder of freedom, and freedom of speech and the fight for human rights.” The German consulate gave the segment of the Berlin Wall as a commemoration of 25 years of liberation after the Wall fell and as a gesture of gratitude toward the United States for its support in the two subsequent decades of reunification between East and West Germany.

For Mayor Regalado, however, the Wall is emblematic of so much more.

“Miami is called the Magic City, the Gateway to the Americas, but the unofficial name of Miami has been and is the Capital of the Exiles, because you have the waves of Cubans, and then Central Americans, and now you have Venezuelans, so these are the people that create a city that is the most diverse city in the U.S.,” Regalado says. “Miami Dade is a mirror of the city. The student body, the students that attend Miami Dade College, are a mirror of our society.”

In Regalado’s view, Miami is a gateway for immigrants fleeing oppression and blighted prospects in their home countries. Just as the fall of the Berlin Wall opened up the wider world to East Germans, so Miami represents the hope of the freedom to pursue a destiny of one’s choosing. Central to this vision is the community college, Miami Dade, and the visionary leader at its helm, Padrón.

The fall of the Berlin Wall also represented the transformation of the former society and the brightening of prospects for its citizens. Angela Merkel, for example, was a research scientist in East Germany before the Wall fell. Now she is the chancellor of Germany.

The placement of the Wall at Miami Dade is evocative of the fact that, ever since Padrón became the president in 1995, the college has helped transform Miami’s formerly desolate downtown and improve the lives of those it touches.

“I think that Miami’s revitalization was driven by Miami Dade College,” Regalado says. “I think that they took on many, many students that would not have had the opportunity to become professionals. [These] professionals in turn created the Miami that we have today.”

And while Padrón from time to time has dust-ups with various members of the Florida legislature, notably over decreased funding for the college ever since the recession, the mayor and Padrón stood side by side in Wolfson’s Kyriakides Plaza as the black cloth shrouding the 10,000-pound section of the Wall was lifted on Nov. 9, 2014.

“Eduardo is a friend,” Regalado tells Diverse. “I admire him as a leader.”

A vision for the future

When the Wall fell in Berlin, it opened up a society that had been closed off for decades. Not so when it was installed in Miami Dade.

It is difficult to imagine a place that is more representative of diversity, on a national and international level. In total, more than 150 nations are represented among the student body, and Miami Dade students can travel to almost 30 countries internationally on exchange programs, according to Miami Dade.

Miami Dade has enrolled 2 million students, the equivalent of a small nation, since it opened its doors in 1960 as Dade County Junior College, according to the institution. It has grown to become the largest community college in the country, with more than 165,000 students currently enrolled.

The power of such a large campus cannot be understated. “When people say that liberal education is something for elite institutions, i.e., places like Pomona, I always like to give the example of Miami Dade College,” says Dr. David Oxtoby, president of Pomona College in California.

“The fact that you can take a very large institution and systematically apply core goals of liberal education — which includes active involvement by students in learning and high-impact practices that lead to success — and you can apply them at the scale of Miami Dade, [then] no one has any excuse. If they can do this at a large and complex institution like Miami Dade, then why can’t we do it at every college and university in the country?”

Not only has Padrón helped create the largest college in the country, but he has also helped shape the national conversation about what a contemporary education should look like. As the chair of innumerable national boards and councils, he literally has a place at almost every table.

Padrón’s involvement in all these groups is a testament to his character, affability and ability to adapt. He is, in some ways, the consummate politician. As Regalado says, “Had he gone into politics, he would have been elected to anything. But he chose to do education.”

The politics of higher education are Padrón’s particular genius — as he promotes the interests of his college, he helps others up along the way. Higher education leaders speak of Padrón in the warmest terms, calling him a friend and a mentor.

American Council of Education (ACE) President Molly Corbett Broad calls Padrón an “iconic” figure in higher education. “He’s really at the cutting edge of some of the most significant ways in which universities and colleges are innovating with the goal of deepening student learning,” she says.

Dr. Lenore Rodicio, MDC’s provost of academic and student affairs, says that Padrón is always multiple steps ahead of the game. “He’ll call me into his office, and we’ll have a conversation and he’ll say, ‘You know, I think this area is going to be an area where we’re going to see a trend where there’s going to be a lot of jobs in this area, where this is going to be the next big thing. I think we should start looking at academic programs in this area,’” Rodicio says.

Subsequently, that particular area of focus will take off nationally. While other colleges establish centers or programs for that discipline, MDC already has the programming in place.

Higher education would appear to be reaching a crisis point in the United States. Rising tuitions are resulting in crippling, sometimes lifelong burdens of student loan debt for graduates. Even worse, they are indebting students who dropped out and now have nothing to show for their efforts other than the loans.

At the same time, some question the meaning of the degrees that students receive, particularly those that do not appear to lead to a job that will enable graduates to pay back the debt they accumulated.

Even as the cost of one year at many private colleges has long since passed the $50,000 mark, and others are creeping ever closer to $70,000, alternatives are limited. Many state universities are growing increasingly expensive, as states divest of higher education and schools seek to compete with each other for students by adding buildings, new technology and other amenities attractive to prospective students.

Whether the idea will come to fruition remains to be seen, but it would open up doors — with two years of education under their belt, students could either start to work immediately or move on to other institutions with a greater sense of financial security.

Even as they are promoted as affordable alternatives, community colleges themselves are feeling various pressures. For one, they get by on limited funding and are open to all, meaning that they attract all types of students: first generation to college, low income, former high school dropouts, mid-life career changers, etc. As such, the demands placed on them are great.

Predictably, Padrón appears to have already anticipated that community colleges would one day be asked to be all things to all people: providing not just job-specific training, but also the fundamentals of a liberal arts education.

MDC sets students on the path to a liberal arts degree through articulation agreements with colleges and universities nationwide, as well as all of Florida’s public four-year institutions. Nor are most students simply working toward a certificate. The college offers more than 150 academic programs, but more than 70 percent of the students are working toward an Associate in Arts degree, according to Rodicio. In addition, the college also offers various bachelor’s degree programs.

The most competitive students can apply to MDC’s Honors College, which has transfer agreements with some of the nation’s top universities.

“I think [Padrón] has provided unique leadership for the importance of providing a quality liberal education to first-generation students who see college as their primary portal to the future,” says Dr. Carol Geary Schneider, president of the Association of American Colleges and Universities (AAC&U). “It’s very unusual to see a policy leader with his stature standing up there and saying, ‘Our students deserve the best and most empowering forms of education. Not just short-term certificates.’”

MDC is dedicated to providing pathways for multiple forms of learning. “We’re still waiting for the rest of higher education to follow [its] lead,” Schneider says. “Nonetheless, what was then a bold solitary move has since become a movement.”

For leaders in the community college sphere today, the No. 1 issue is student success and completion. Every two years, for example, the Aspen Institute celebrates those colleges that have made the greatest impact on student success. It is one of the field’s premier awards.

But according to some higher education leaders, MDC and Padrón were already grappling with this problem years ago.

Dr. John E. Roueche, president of the Roueche Graduate Center at National American University, says MDC was on it 30 years ago. “A lot of people, I think, have forgotten that Miami Dade was the leader [in] moving their college philosophy from one almost solely focused on student access — the ease of access, availability, opportunity, that kind of thing — to caring greatly about student completion and student graduation.”

When considering large, nationwide trends, it is easy to simply summarize trends in graphs, statistics and models, eliminating the human element altogether. One of Padrón’s best qualities, according to Schneider, is that he does the opposite.

“He’s trained as an economist, and you know economists are infamous for reducing things to formulas, to numbers, to abstractions.

And they are famous for factoring out the human component and investing a lot of energy in models and trend analysis,” she says. “Eduardo is probably the most humanistic economist I’ve ever met. The people are always front and center for him. The goal is to make the economy work for people who are currently not well served by it.” — David Pluviose contributed to this article.