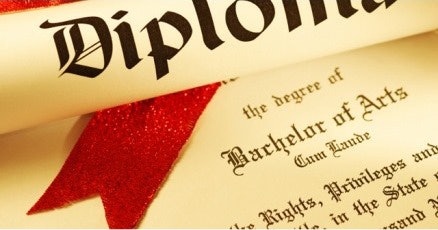 WASHINGTON — America must break its “addiction” to bachelor’s degrees and become better acquainted with the financial benefits of one- and two-year degrees and certificates, an education researcher argued at a recent panel discussion about what level of higher education it takes to break into the middle class.

“When you ask people what they think about postsecondary education, they say ‘bachelor’s,’” said Mark Schneider, Vice President and Institute Fellow of the Education Program at the American Institutes for Research, or AIR.

“I think of this as a bachelor’s addiction which has to be broken and has to be changed,” Schneider said. “The contemporary bachelor’s degree takes too long, it’s too expensive and it’s not for everyone.”

Schneider presented wage-earnings data that show various one- and two-year degrees and several certificates enable holders to command salaries that surpass those of some bachelor’s degree holders.

Technical careers are particularly rewarding, Schneider said as he presented figures that show plumbers and technicians in a variety of fields that only require a certificate all earn upward of $71,000 — several thousand dollars more per year than many bachelor’s degree holders — a decade after they complete their educational program.

“Where you learn how to fix things, you win,” Schneider said.

The growth in associate’s degrees and other sub-baccalaureate credentials awarded has also outpaced that of bachelor’s degrees, 39 percent versus 18 percent from 2008 to 2013, respectively, figures provided by Schneider show.

Schneider made his remarks Monday at AIR during a social mobility lecture series titled “Do You Need a Bachelor’s to Join the Middle Class?”

He was joined by Anthony Carnevale, director of the Georgetown University Center on Education and the Workforce.

Though presented as a debate, Carnevale and Schneider found more common ground than not.

Schneider said, as taxpayer dollars become more scarce, policymakers and students need to know which degrees and certificates are most likely to pay off.

“We have to make people understand there are cheaper ways to get people into the labor market,” Schneider said, noting that surveys have shown students say high wages and middle–class careers are important goals.

Carnevale agreed and said that, although bachelor’s degree holders on average earn more than those with associate’s degrees, much is “hidden in the averages.”

Carnevale stressed the need to “make the system transparent” so that students can make well-informed choices about what to study.

However, Carnevale cautioned that “information can be useless when there’s too much of it” and that it should be targeted toward students at key moments in their academic careers.

“We need to be fairly aggressive about giving this information to young people when in high school and preparing to go to college,” Carnevale said. “Make sure they understand they have to pay this (student loan) back one day and then do it again in college.”

“What we have is a big black box in American higher education, a big impenetrable black box. It cost about $450 billion per year. It has 20 million students in it,” Carnevale said. “We’re not sure what produces learning and earning. We drop money in it every year, pay almost no attention to what comes out at the other end, and at some point that becomes intolerable because we don’t have another $450 billion.”

Schneider spoke of his efforts to provide more information about expected wages by degree or certificate through www.collegemeasures.org. However — upon questioning by Diverse — he conceded that it’s unclear as to what impact, if any, the website is having on consumer choice in higher education.

Since the website’s debut several years ago, he said it has generated about 400,000 hits.

“But whether that translates into one person changing behavior, I have no idea,” Schneider said. “We uncover these data, we try to get them into use and we just are struggling with how to make that happen.

“Quite frankly, it’s not clear to me that a lot of people know how to make it happen.”