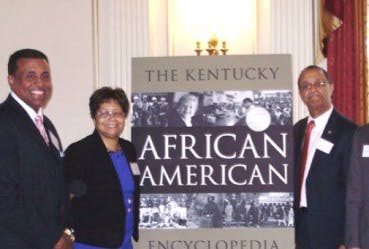 Purported to be the first-ever state-based reference history of African-Americans, The Kentucky African-American Encyclopedia (KAAE) chronicles a sweeping tapestry of Black Kentucky history from the state’s frontier era to the present. With a publication date of August 28, the encyclopedia became available for purchase earlier this month by its publisher, the University Press of Kentucky.

Within the 551-page volume that includes 1,155 article entries, readers will encounter trailblazers, ranging from Captain Jack Hart, a slave and scout who explored the Kentucky frontier with Daniel Boone in the 1770s; world renowned boxer and Louisville native Muhammad Ali; to Mae Street Kidd, an outspoken civil rights advocate and among the first Blacks elected to the Kentucky House of Representatives.

“I think what the volume does very distinctly is reveal what African-Americans did for themselves within their own respective worlds and spheres of influence,” said Dr. Gerald L. Smith, one of three general editors who led the encyclopedia project and a historian at the University of Kentucky.

“What we tried to do is to really reach outside the bounds of traditional narrative of Kentucky history in order to capture the hidden and forgotten stories that were significant not only in the making of Kentucky history but American history as well,” noted Smith, who is the Martin Luther King Jr. Scholar in Residence and Theodore A. Hallam Professor in the University of Kentucky history department.

Along with Smith, Dr. Karen Cotton McDaniel and Dr. John A. Hardin led a University of Kentucky-based team that included 16 editorial staff members, and it worked with 150 writers to complete the encyclopedia over seven years. As a new release, the book has already won acclaim by capturing the 2015 Thomas D. Clark Medallion, which honors the book most noted for excellence in documenting Kentucky history.

“What we have is a single volume on Kentucky African-Americans looking at institutions, people, events, politics, business, women’s issues, religious issues—it does everything from A to Z,” said Hardin, a history professor and former dean at Western Kentucky University.

“One of the goals the general editors and I pursued was to jumpstart the research agenda for the academics but at the same time help the K-12 [teachers and students] get their hands around the African-American experience in the commonwealth of Kentucky,” he added.

McDaniel, professor emeritus at Kentucky State University (KSU), said the idea for KAAE originated partly from an early 2000s proposal she submitted to the University Press of Kentucky (UPK) that had envisioned a biographical encyclopedia of notable Black Kentuckians. However, UPK officials expressed interest in a project that would include a range of entries, including articles on significant events, organizations, movements, and other categories related to the African-American experience in Kentucky.

At the time, the UPK had already published three Kentucky history encyclopedias, and the newly-appointed UPK director, Stephen Wrinn, approached Hardin and Smith in 2003 about the two of them working with McDaniel to produce a comprehensive African-American history encyclopedia, according to Smith.

“McDaniel had been a librarian at Kentucky State [University]. John and I had written extensively about African-American history in Kentucky. … And we were able to come together” and present ideas that eventually led to a formal proposal, Smith said.

The book project formally launched in 2008 and attracted roughly $450,000 in total funds and in-kind support, Smith estimates, noting that fundraising efforts netted $350,000 in cash for the encyclopedia.

For the three general editors, researching Kentucky’s African-American history proved a natural fit for their careers given their scholarship and life experiences. “Growing up in this community, I was very interested in the African-American experience because I found very little about Blacks in Kentucky or Blacks in Lexington.” Smith said.

Smith is the author of “A Black Educator in the Segregated South: Kentucky’s Rufus B. Atwood and Lexington, Kentucky” and co-editor of “The Papers of Martin Luther King, Jr.: Advocate of the Social Gospel, September 1948–1963, Volume VI.”

Hardin, a Kentucky native, is the author of two books, “Fifty Years of Segregation: Black Higher Education in Kentucky 1904–1954” and “Onward and Upward: A Centennial History of Kentucky State University 1886–1986,” and co-editor of “Community Memories: A Glimpse of African Americans in Frankfort, Kentucky.”

A retired KSU faculty member and administrator, McDaniel has been a tenured full professor and director of libraries at the Frankfort-based historically Black university. She has served as a law librarian at the Kentucky Department for Public Advocacy and an archivist at the Kentucky Department for Libraries and Archives. McDaniel has authored more than 20 publications on Black Kentuckians, including chapters in “Kentucky Women: Their Lives and Times,” edited by Dr. Melissa A. McEuen and Dr. Thomas H. Appleton.

“I’d like to see efforts in other states replicate what we’ve done in Kentucky, especially since this state has a small African-American population in comparison to other places,” McDaniel said, noting that Blacks have declined from comprising 20 percent of the state’s population following the Civil War to roughly 7 percent in 2015. In 2013, the U.S. Census pegged Kentucky’s African-American population at 8.2 percent of the state’s total.