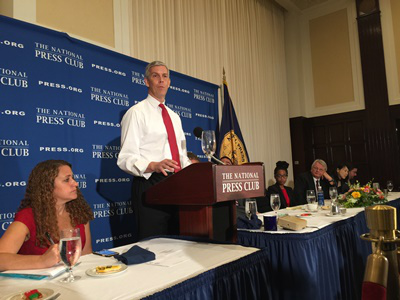 Education Secretary Arne Duncan challenged educators and those to whom they answer to take “an unsparing look at our own attitudes and our own decisions and the ways that they are tied to both race and class.”

WASHINGTON — Education Secretary Arne Duncan, in a speech before an audience Wednesday at the National Press Club, announced a new policy to reallocate state correctional funding dollars to raises for teachers in the nation’s most underprivileged districts.

In what were perhaps his most intentional comments to date on race, Duncan addressed the disparities in educational access and correctional patterns within a decidedly racial framework.

The secretary challenged educators and those to whom they answer to take “an unsparing look at our own attitudes and our own decisions and the ways that they are tied to both race and class.”

“In the wake of Ferguson, Baltimore and elsewhere, this has become a central discussion for many in America, and rightly so,” he said. “Those of us in education simply cannot afford to stay on the sidelines. Let’s recognize upfront that this is one of the hardest conversations that we can have in education.

“Suspensions, expulsions and expectations for learning track far too closely to race and class,” Duncan continued. “Sometimes the facts must force a tough look inward. This is not just about explicit, obvious bias. Indeed, sometimes when a genuinely transparent moment of bias arises, the whole country stops and takes a breath. A child holds a clock and we see a bomb. But more often, it’s far subtler stuff buried in invisible privileges and expectations that we’re not even aware that we hold.

“It’s painful to admit to one’s own actions. It’s painful to admit that one’s own actions might be causing harm, particularly for us as educators who come to this work from such an altruistic place,” said Duncan. “It’s difficult work challenging centuries of institutionalized racism and class inequality, but I firmly believe a hard look at ourselves is a critical part of becoming the nation we strive to be — one of liberty and opportunity regardless of circumstances of your birth.”

Duncan proposed a reallocation of funding from the correctional system to the poorest schools in each state “to get great teachers in front of our neediest kids.”

Acknowledging a need for salary increases for all teachers, Duncan suggested that particularly those working in schools in the bottom 20 percent of each state in the most impoverished areas “doing the hard but incredibly important work in those schools” need a boost of up to 50 percent. Teaching is hard work everywhere, he said, but it is particularly harder for teachers at underresourced schools.

“Everyone here knows it can be challenging to recruit and keep fantastic teachers in the schools where the needs are the greatest,” said Duncan.

“The fact of the matter is, because we’re so property tax-based throughout the nation — not everywhere, there are some important exceptions — but in far too many places the children of the wealthy get dramatically more spent on them than the children of the poor,” he said. “And until we become uncomfortable with that truth, until we really start to believe that Black and brown children and poor children actually can contribute to society, we’re going to continue to have huge disparities.”

Acknowledging the “decades of neglect and abuse and mistreatment and non-investment” in communities like Baltimore; Ferguson, Missouri; his native Chicago; and other majority-minority cities and school districts across the country, Duncan said the historically inequitable funding of the public education system in states is doing a disservice to the nation.

“The bottom line is that we must do more to ensure that more strong teachers go to our toughest schools and stay for the long haul. Right now, in far too many places, glaring and unconscionable funding gaps create all the wrong incentives,” said Duncan.

But even in states that are said to be doing well, students are still largely underprepared for college, Duncan said. Citing Massachusetts, which boasts the highest performance rates in the country as an example, Duncan revealed that, even in the top education state, roughly one-third of students still require remedial classes once they get to college. If that’s the story in the No. 1 state, Duncan asked, what does that say about two through 50?

“What’s the cumulative impact of such a massive disparity of opportunity over 13 years of a child’s education?” he asked. “The linkage between education, or a lack thereof, and incarceration is powerful.”

Duncan said it is imperative that correctional funds be redirected to ensure that “all students, including and especially students those in low-income communities of color, have access to high standards that align to expectations of the real world, challenging coursework that prepares them for college without having to lose time with remediation.”

The ultimate goal is to “make opportunity real for those who have grown up without advantages,” said the secretary.

“It’s a fight to increase social mobility; it’s a fight for social justice,” he said. “And the stakes could not be higher. For far too many of our children today, this fight could literally mean the difference between life and death.”