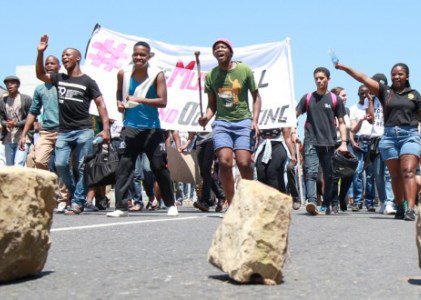 For the protesting students in South Africa, free tuition is the ultimate goal.

Following a week of national protests against a proposal that would have allowed for an up to 11.5 percent increase that culminated Friday in a march in front of the main government offices, Zuma announced prices would remain stable next year.

But according to University of the Witwatersrand law student Anele Nzimande, the victory was not won without backlash.

“Members of #FeesMustFall in Cape Town were charged w treason. Now I’m being accused of trying to overthrow the State for Free Education?” she asked via the platform Sunday evening.

While students and their supporters are happy with the progress, there is still much work to be done.

“Protest continues tomorrow, Monday, 7am. Meeting point: ResLife Building. 0% [increase] means nothing if we still can’t afford fees,” read a message from Twitter user @UWCStudents. “Despite a 0% increase – PHASE 2 is now to get fees decreased. Fees remain the same amount. This is nothing to [be] celebrated.”

“#FeesHaveNotFallen what has fallen are fee increments (for now). Many are still excluded from accessing university,” tweeted self-described storyteller and social activist Simamkele Dlakavu.

“The 0% is a band-aid. Until and unless we can get government, now, to commit to a more sustainable solution, we’ll do this next year again,” said @PearlPillay on Twitter.

For the students, free tuition is the ultimate goal.

“I refuse to accept 1) government has no money 2) universities can charge whatever they want 3) free education is not possible,” tweeted @mathidube.