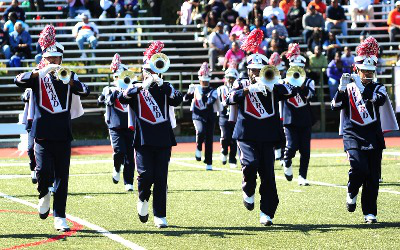 During the halftime show of the Howard vs. Savannah State football game October 31, band members announced they would be suspending band performance as a protest against some scholarship disbursement discrepancies.

“We have decided to wear all Black in protest for the lack of a budget, more specifically, scholarships for the band program, and to shed light on the lack of financial support for the student body,” said a band spokesperson at the start of the show. “Until the university addresses these issues, we will not support the university with our musicianship.”

The band did continue as planned with the scheduled tribute to Bob Jackson, a former band leader who passed away in 2014.

According to the Howard Hilltop, the institution’s student newspaper, band members were upset about issues surrounding uncertain housing and registration statuses due to the late disbursement of scholarship funds.

The concerns have gone from Saturday’s halftime show to the social mediasphere, as have other student protests of late.

A statement the band members posted on its social media channels said, “The Howard University S.H.O.W.T.I.M.E Marching Band is taking a stand. We are seeking answers and a plan of action regarding the band’s budget and disbursement of student scholarships. Until we get answers, we will not support Howard University with our musicianship. #SilentSHOWTIME”

This is not the first student-led protest at Howard this year. In September, a viral #TakeBackHU campaign protested late financial aid disbursements, uncertain housing, technology breakdowns and many other concerns similar to those voiced by the #SilentSHOWTIME movement.

“The Howard University administration is aware of student concerns and continues to take action to address them,” the administration said in a statement at the time. “This morning administration officials met with members of student leadership to apprise them of work that has been done up to this point and to highlight the challenges still ahead. The administration and student leaders are working collaboratively on providing responses to student concerns and meeting their needs. The university has an unwavering commitment to academic excellence and ensuring that students have what’s needed in the classroom and beyond.”

Many have been supportive of the students’ movement. Beloved professor of Africana Studies Dr. Greg Carr said via Twitter, “As a former student body president and an alum musician of an HBCU marching band, I know how much heart #SilentShowtime is showing. Salute.”

The Hilltop reported that even members of Jackson’s family said “he would want” the students to go on with their protest.