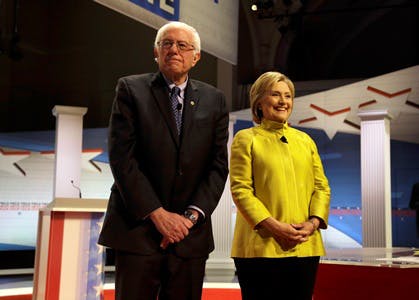 Hillary Clinton won the Nevada Democratic caucuses on Saturday by a margin that was at 5 percent and grew to 6 percent with 95 precincts counted by midday Sunday.

The 53-47 percentage point edge was still closer than anyone could have imagined as Sanders himself pointed out that, five weeks ago, he was 25 points down.

Sanders’ appeal with young voters was undeniable as “free education” was the buzz among a generation of voters throughout the state.

Indeed, in her victory speech in Las Vegas, Clinton seemed to want to assure those who “feel the Bern” and are drawn to the “revolution” that she too had real solutions to their problems.

“And I want to say this to all the young people out there, I know what you’re up against. If you left college with a ton of loans, it’s not enough just to make college more affordable. You need help right now with the debt you already have,” Clinton said.

“That’s why I have a plan to cut your interest rates and cap payments so you never have to pay more than you can afford,” Clinton added without more detail.

Then she mentioned that one of her ideas is to add a little quid pro quo of sorts.

“Your generation is the most tolerant and connected our country has ever seen. In the days ahead we’ll propose new ways for more Americans to get involved in national service and give back to our communities because everyone has a role to play in building the future we want.”

Will it be enough to stop the flow of young women to Sanders and back to her camp?

Nevada’s unique proposition on Saturday was its status as the first state on the campaign trail to actually look like America.

And Hillary seemed to take advantage of that. She finally won the female vote that had eluded her. Even the New York Times ballyhooed that Clinton won Nevada with a “diverse coalition” that included unionists, casino workers and the coveted Hispanic and African-American vote.

Was something missing? Almost all mainstream accounts left out a key part of the coalition.

According to the Census, Nevada’s electorate is 24 percent Latino, 8.7 percent African-American.

The Asian vote is 9.6 percent of the electorate.

It grows to a whopping 10.6 percent when you add Native Hawaiian and Pacific Islander.

Yet with South Carolina’s Democratic primary on the way and with the dominant African-American vote there, the Nevada community was played up as if it were a barometer of Hillary’s Black appeal. It’s the reason she has mentioned Obama positively whenever she could.

But it’s also why she wasn’t sure where she stood after African-American luminaries like Cornel West and Harry Belafonte declared their support for Sanders very loudly.

Who saved her on Saturday?

On Saturday, Nevada’s Asians were aided by activists from around the nation to help get AANHPI to the polls.

The result: The turnout for Asians was at 5 percent.

That may have been the unheralded difference maker for Clinton, who won by slightly more than that amount.

After losing Nevada, Sanders will be forced to rethink. Clinton is neutralizing him by saying all his “the economy is rigged” rhetoric makes him a single-issue guy.

Esoteric, they’re not. In fact they should be understood especially by minorities.

But this is where policy alone can’t draw people to the polls. Sanders needs to forget surrogates like West and Belafonte and reach out to all minorities himself.

Sanders has been more inclusive in the last month, making sure in public speeches to include mentions of all races and ethnicities into his words.

At 5-6 points down, Sanders is well within reach of Clinton. Ultimately, the race may go to the one who doesn’t take any one group for granted and embraces a real campaign marked by diversity.

Emil Guillermo is a journalist and commentator for the Asian American Legal Defense and Education Fund at http://www.aaldef.org/blog