2016 Most Promising Places to Work in Student Affairs

The Most Promising Places to Work in Student Affairs national survey was first commissioned by the American College Personnel Association (ACPA) and Diverse: Issues In Higher Education in 2011. The national survey is administered by the Center for Higher Education Enterprise (CHEE) at The Ohio State University, which is directed by Professor Terrell Strayhorn. Among other things, Strayhorn served as ACPA director of research and scholarship from 2009 to 2012.

The purpose of this commissioned study was to examine the extent to which diversity and inclusion permeates aspects (e.g., administrative structures, commitments, work environments, staffing practices) of various divisions of student affairs (or equivalent) at participating ACPA-member institutions across the globe.

About the Center for Higher Education Enterprise

CHEE’s mission is to become the country’s preeminent higher education research and policy center, solving issues of national signifi cance. And in terms of vision, CHEE exists to advance the higher education enterprise through the creation and dissemination of distinctive research that informs policy, strengthens communities and enables student success. For more, go to: http://chee.osu.edu.

Dr.Terrell Lamont Strayhorn (principal investigator) is a professor of higher education at The Ohio State University, where he also serves as director of the Center for Higher Education Enterprise (CHEE). Author
of 10 books, more than 100 journal articles and book chapters, more than 150 papers at international and national conferences and more than 200 keynotes, Strayhorn is a prolifi c scholar, internationally known student
success expert, highly sought public speaker and was named one of the top scholars in his fi eld by Diverse: Issues In Higher Education in 2011.

Derrick L. Tillman-Kelly is special assistant to the director of CHEE and University Innovation Alliance (UIA) Fellow at The Ohio State University. Author of several journal articles and book chapters, his research interests consider three primary aspects of higher education: leadership and organizational socialization of administrators; minority serving institutions; and the impact of identity intersections on academic and social experiences of college students with specific consideration of race, gender, sexuality and spirituality as social identities.

In addition to the principal investigator and project coordinator, the project benefited from the contributions of other CHEE staff who helped contact administrators, craft institutional profiles and elicit quotations. These include (in alphabetical order): Kristin Gebhart, Trevion Henderson, Alesia Howard and Christopher Travers.

Beyond senior student affairs leaders who are committed to use of the institutional and divisional missions and strategic plans to guide their decision-making, student affairs practitioners at this year’s Most Promising Places to Work in Student Affairs noted that their senior leadership is often available and involved with them and the students. For example, student life staff members at The Ohio State University spoke of the consistent and intentional presence of Dr. Javaune Adams-Gaston, or Dr. J as she is more affectionately called by students, at a diverse array of student-focused and student-organized events from week to week. Similarly, those at Texas A&M University-Corpus Christi noted that it is not uncommon to find Dr. Don Albrecht, vice president for student engagement and success, at a variety of events, including the occasional office birthday celebration. Similarly, student affairs practitioners at Texas State University shared that it is clear that Vice President Joanne Smith understands their work and regularly speaks with staff in the division to let them know that they have her support. This impact does not simply rest with the senior student affairs officer, however. To this end, student affairs professionals at Indiana University-Purdue University Indianapolis (IUPUI) also noted that it is important for all senior leaders in the division to be available and involved. Assistant Vice Chancellor Tralicia Powell Lewis was noted for being intentional in her support of staff, especially student affairs practitioners of color, by attending their events and pulling them aside to congratulate them on successful programs.

Recognition of one’s good work and contribution to the institution and student affairs unit was one practice student affairs practitioners at this year’s list of Most Promising Places to Work in Student Affairs noted as a positive attribute of their institutional culture that was beneficial to their and their colleagues’ retention. Several individuals acknowledged that informal comments, such as “that was a great program” or “keep up the good work” from colleagues and supervisors is important to them.
While informal recognition is important, several professionals at Saint Louis University and the University of West Georgia spoke to the benefit of formalized recognition in making their institutions promising places to work. For example, at the University of West Georgia, there is a peer recognition program that allows individuals to nominate colleagues for recognition at the annual university banquet. Similarly, Saint Louis University offers a host of recognition opportunities at the division and university levels. One example is SLU Stars, which is “a peer-to-peer recognition award that recognizes colleagues who demonstrate professionalism and behavior congruent with the University’s Ignatian ideals.” All SLU Stars are featured on an internal faculty and staff recognition portal and eligible to be recognized at the annual divisional Student Development Staff Excellence Awards. It is clear that institutions should invest in formal and informal recognition opportunities to ensure that their student affairs practitioners know that the institution and senior leadership value when they #DoGoodWork!

In addition to being recognized for their good work, a number of student affairs practitioners lauded their institutions, senior leaders and colleagues for valuing work/life balance, which included inclusion of family, partners and children as well as the occasional encouragement to use seasonal downtime to get away from campus and recharge. For example, Centre College’s Randy Hays, vice president and dean of student life, was said to encourage his staff members to identify lull times in the year and create opportunities to get away from campus and refuel, whether by taking vacation or attending trainings or conferences away from campus.
Similarly, practitioners at Hofstra University found their colleagues to be particularly receptive to the inclusion of their partners and children at divisional events and the broader divisional community, with one student affairs staff member sharing that the burden of being a single mother was lessened by the support of her colleagues.

Finally, student affairs practitioners at nearly every institution on this year’s list of Most Promising Places to Work in Student Affairs noted their appreciation for intentional investment in their development as professionals by their supervisors and senior leadership. While practically all institutions provided encouragement and support to attend local, regional and national conferences of professional associations, such as ACPA, there are several institutions that took even more pronounced measures to demonstrate their support to the development of their student affairs staff members.

For example, Hamline University staff members noted the multiple levels of investment, including monthly all-student affairs meetings, professional development sessions and diversity trainings, which ensured that all in the division were touched, from graduate assistants through senior leadership. At Centre College, several student affairs practitioners noted the ability and encouragement to test out and learn other functional areas by assisting colleagues with programming and planning. Similarly, those at Bridgewater State University described support for involvement outside of the campus community, namely in the local community and with professional organizations. In addition, the University of Vermont was lauded for their willingness to offer a staff member paid leave to complete her doctoral research as well as intentionally and actively pursue multicultural competence by setting aside particular days for the division to gather collectively and focus on these topics. Whether it is encouraging staff members to attend specific conferences and trainings or bringing noted well-established and forward-thinking members of the broader student affairs professional such as is the practice at California State University Channel Islands, no division of student affairs can go wrong by investing in the personal and professional development of their college student educators. 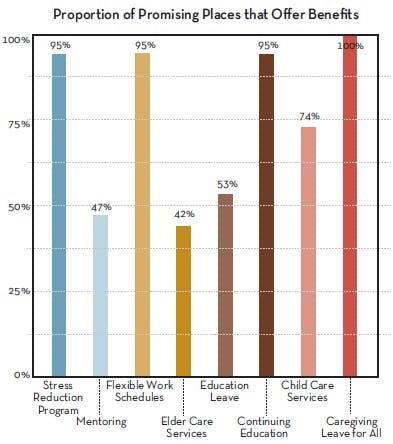 >> 2015 Most Promising Places to Work in Student Affairs

>> 2014 Most Promising Places to Work in Student Affairs