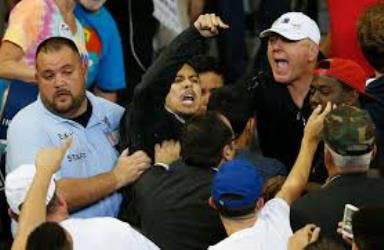 As Donald Trump continues his seemingly inevitable march toward the Republican nomination for president, it appears that all the searing hostility, bombast, anger, hate and resentment that has largely accompanied his campaign as exemplified by his most ardent supporters has followed suit.

By now, a sizable number of people have seen the video of a 20-year-old Black woman, Shiya Nwanguma, being attacked and accosted as she was being escorted out of a Trump rally in Louisville, Kentucky. Nwanguma, a college student, told reporters that she was kicked, punched at, had racist and sexist slurs hurled at her and was violently manhandled.

Trump, has shown little interest in dousing such fires, said Sunday that he is “considering” paying the legal fees of a man who was arrested after throwing a sucker punch at a protester during a rally in North Carolina last week. John McGraw, 78, has freely admitted to assaulting Rakeem Jones and said in an interview later that Jones “deserved it” and that “the next time we see him, we might have to kill him.”

These have not been isolated incidents at Trump rallies:

·        Another Latino man was assaulted and thrown out of Trump rally as the crowd shouts USA! USA!

·        We have been witness to a Black man being the victim of disgraceful violence at another Trump related event.

·        Thirty Black students at Valdosta State University were escorted out of a Trump rally.

·        A White Pulitzer prize winning Time Magazine reporter was violently manhandled and thrown out of a Trump rally by Secret Service agents.

There are undoubtedly similar videos that are just as disturbing.

In the case of Ms. Nwanguma, one of the men in the video roughing her up as he forces her out of the building was Towson University graduate Matthew Heimbach, who unsuccessfully attempted to establish the White Student Union at Towson University and is the current head of a traditionalist youth network. .Another person in this same video was later identified as Joseph Pryor, a 20 year old recent U.S. Marine enlistee. When the video exposing his involvement in the incident was made public and bought to the attention of Marine officials, Pryor was expelled from the Corps.

Both Latino men were the victims of racist and xenophobic slurs from protestors. The Black students raised their fists in the air as they were escorted out of the auditorium. The photographer in question, Christopher Morris, was issued an apology from the Secret Service after Time Magazine contacted them. This past weekend, we saw several White Trump protestors find themselves on the receiving end of Trump’s violent, unhinged goons.

First off, I will admit, that each of these individuals reacted better than I would have. As a tuition paying student, I would have taken action against Trump. Secondly, if that man had spit in my face, I would have tried my best to send him to the cemetery. Such behavior was totally foul and uncalled for.

What these incidents represent, both individually and collectively, is that Trump has managed to tap into the anger, fear, resentment and fear of a large segment of White, largely blue collar, working class voters both democrat and Republican (although he has his supporters among more upscale affluent Whites as well) who are largely psychologically crippled with racial, social, economic, religious and xenophobic fears. These are the men and women who see the America they once thought existed as largely gone, though such a society never existed as Joan Walsh so eloquently argued in her very thoughtful and engaging book, What’s The Matter With White People?

In their misguided mindset, “their nation has been hijacked, contaminated and taken siege by the multiple forces of globalization, the continuing blacking and browning of America, affirmative action, the erosion of traditional gender roles, the redefinition of what wee previously well-established social hierarchies and other related issues that in the minds of many people in this socio economic cohort are viewed as sinister” forces designed to undermine, disrupt and destroy good old fashioned American values as well as the nation itself.

Trump also has successfully, in a perverse way, managed to tap into the fascist overtones of 1930s Europe. His rallies have become a perverse haven for racists, sexist, homophobes, xenophobes and others who embrace intolerance. It is evident that he has studied and decided to emulate the rhetoric of former socialist turned fascist Benito Mussolini and, yes, to a lesser extent, Adolf Hitler, by adopting the brash physical movements and piercingly polarizing rhetoric that was commonplace among both mid-20th century madmen. These men were able to tap into the fears, anxieties and resentments of their fellow European countrymen and use such anger to acquire leadership and power. We all know the tragic end result of such blind, irresponsible opportunism.

The fact that Trump managed to tell MSNBC commentator Chuck Todd and others with a straight face that he had never heard of David Duke and knew “nothing” about the Ku Klux Klan or other White Supremacist organizations (footage of him in a 2000 news interview debunked such dishonesty) would be laughable if it were not so dangerous. What we have witnessed over the past several years is an alarming backlash toward others who are not perceived to be “real Americans” by those wishing to return the nation to earlier more racially and gender stratified and restrictive times. Much of this has been due to the fact that there is a specific segment of the population who are angry at the fact that the nation elected a Black man as president of the United States.

The fact is that White supremacists have existed since the inception of this nation. The only difference now is that instead of operating behind the scenes in overt and cult-like fashion, such a monstrous movement has been emboldened by the current, politically/racially fractured state of affairs. Coupled with largely inadequate focus and coverage by the mainstream media, they have been given a mouthpiece and and ample publicity. Trump, fringe segments of the radical right and to a degree, a segment of the mainstream media have carelessly played along with such dangerous fire.

The fact is that for more than a half century, the Republican party has been at work creating and exploiting racial fears of certain segments of the White population using dog whistles and coded political messages ― crime, welfare, states rights, “reverse discrimination” (which there is no such thing) and others. Over the past several years, the tea party has further amplified the caustic tone with its birther nonsense, questioning the president’s intelligence, his ethics, his fitness to serve in office, his manhood and his basic humanity. It has been a sheer and utter disgrace. A sad commentary to be sure.

Watching and listening to Trump supporters whipping themselves up into a delirious frenzy screaming, “take him out” and “light the … on fire” as those voicing dissent are dragged out of stadiums set off vivid and alarming comparisons of Hitler’s stormtroopers and Mussolini’s brown shirts in mid 20th century fascist Germany and Italy. It was oppressive fascism at its core. We know the eventual results of such aggressive intolerance was not pretty.

I am confident that America will not go down that road. That being said, all of us of good will and decency must make every effort to ensure that we indeed will not do so.