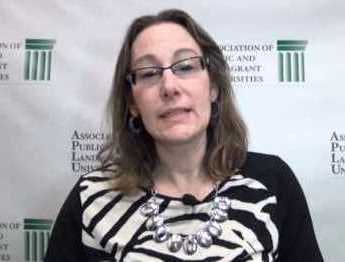 Shari_Garmise is vice president of the USU/APLU Office of Urban Initiatives.

Nine public urban research universities were awarded a total of $450,000 to launch or expand pilot “micro-grant” programs meant to prevent low-income college students who are close to graduation from dropping out, the Association of Public and Land-grant Universities (APLU) and the Coalition of Urban Serving Universities (USU) announced Monday.

“These grants will support nine institutions looking to help students in need,” said Shari Garmise, vice president of the USU/APLU Office of Urban Initiatives. “By supporting these institutions as they develop a micro-grant program or expand a pilot program, we are effectively supporting students, the workforce, and the nation.”

The grants follow the release of APLU’s report, “Foiling the Drop-Out Trap, Completion Grant Practices for Retaining and Graduating Students,” which described the impact of micro-grant student aid programs at 10 public urban research institutions. The report also served as an implementation guide for other universities looking to institute or expand micro-grant programs on their own campuses.

Garmise has said one of the aims behind the latest round of grants is to better understand the impact these grants have on completion—something for which experts have said the evidence is scant to non-existent.

The nine awardees are expected to launch or expand their pilot programs by fall 2016 and continue their development through June 2018.

Funds will be used to strengthen the infrastructures of institutions already serving a significant percentage of non-traditional, disadvantaged students who are low income, first generation, Pell grant eligible and minorities, according to APLU.