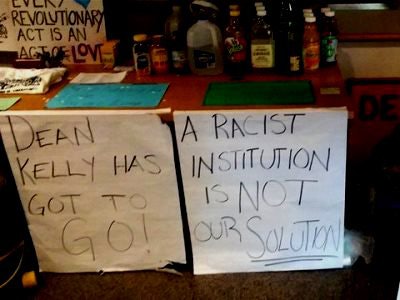 BC Students United, an anti-hate group that sprung up in recent days that includes student leaders from 43 organizations on campus, has made its voice heard.

A public admission by Bellevue College administrators that they could have done a better job informing students about a series of hate speech incidents on campus directed toward Muslims and members of the LGTBQ community is winning the college praise from some of its most vociferous critics.

A group of student activists say that they were outraged that the college had failed to notify them about a string of anti-Muslim and anti-LGBTQ graffiti writing that had adorned walls of buildings across the sprawling campus since January. But they also say that the college’s recent outreach over the past few days has been reassuring, though they remain cautiously optimistic.

For their part, Bellevue College officials say that they mistakenly excluded students from a mass email broadcast informing the campus community about the hate incidents.

“It was never something that was done on purpose,” says Dr. Gayle Barge, vice president of institutional advancement at Bellevue, a public college about 15 minutes outside of Seattle that offers associate and bachelor’s degrees and has an enrollment of about 34,000 students. “We feel like we could’ve done a better job. We’ve apologized. We were under the impression the students were emailed too, [but] they were not.”

While the college’s initial fumbling has been the subject of public scrutiny, its handling of the debacle in the days following the public apology could possibly serve as a case study for how colleges and universities can better deal with the fallout from the steady increase of biased incidents which are becoming all the more commonplace on campuses across the nation.

“We’ve found the conversation with the administration to be pretty constructive,” says Ana Mulió Álvarez, a graduating senior and a member of BC Students United, an anti-hate group that sprung up in recent days that includes student leaders from 43 organizations on campus. “We are not at war with the administration.”

At a meeting held at the school’s cafeteria on Tuesday afternoon, student leaders presented a long list of demands to the administration that include the hiring of additional security officers, recruiting additional faculty of color and implementing a zero tolerance policy when it comes to racism, discrimination and differential treatment.

“We had an authentic, honest dialogue and the institution will now move into action phase,” says Dr. Ata Karim, vice president for student affairs at Bellevue, adding that top administrators were scheduled to meet on Wednesday with the school’s president, Dr. David L. Rule, to “prioritize” the interests brought to college officials by the students.

“We are very proud of our students,” says Karim. “We always want our students to be leaders, engaged citizens and empowered. They are learning in action and we are setting the scene for working together and bringing about a resolution that meets the needs and interests of our students.”

Álvarez, 21, an international student from Spain, says that action is long overdue and says that some students feel unsafe on campus.

“People who believe in White supremacy [are] doing this,” says Álvarez, adding that Nazi sympathizers have been trolling the group’s social media accounts. “They are causing an environment of discomfort and fear.”

Although college officials reported the graffiti vandalism to local police authorities, no one has been apprehended yet. And while the dialogue with the administration has been constructive, student leaders say that the college still has a long way to go to make good on their rhetoric.

“I think this step is necessary,” says Álvarez, about the college’s swift response in recent days and its plan to work with student activists. “It takes talking. We are also realistic that change takes time. But this is a critical moment and we need to keep pushing. We can’t let this die here.”