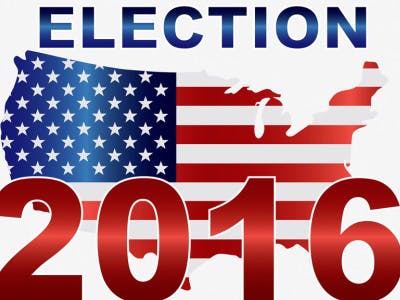 WASHINGTON — On the same day that presidential candidate Donald Trump secured enough delegates to clinch the Republican nomination, the billionaire businessman’s campaign skipped a forum here Thursday meant to illuminate how the presidential hopefuls of 2016 would set education policy and budget priorities.

Despite the absence of the former star of The Apprentice, there were no empty-chair tactics like the one that actor and director Clint Eastwood pulled nearly four years ago at the Republican National Convention when he spoke to a make-believe President Obama during a primetime speech.

But if there were, it might have livened up the event — which drew about 300 people from various education organizations and attracted another 1,100 viewers online — especially since surrogates for both the Hillary Clinton and Bernie Sanders campaigns essentially conceded there’s not much difference between the two when it comes to education.

The forum was convened by the Committee for Education Funding, or CEF, which boasts being the “largest and oldest coalition of education organizations in the country” with 117 membership organizations.

“We have to applaud young people that they have raised the issue of how out of control higher education has become in terms of affordability,” O’Leary said. “Both candidates have the largest education packages of any presidential candidate who has ever run before.”

“It’s definitely on making sure students are able to attend college tuition free,” Turner said. “All students should be able to attend college tuition free because if the federal government and states make it a priority that young people are able to go to college, then young people will be able to complete their education debt free, fulfill their destiny, have a career and contribute to society.”

She stated further that “debt is such a burden on individuals and families that this is a top priority for Senator Sanders.”

O’Leary said for Clinton, a top priority is making sure current student loan holders are able to refinance their loans to ease the debt burdens they already carry.

“Let’s make sure those who have student debt are not held back and able to refinance their student loans,” O’Leary said.

It is important to note that, while the campaign surrogates for the two remaining Democratic presidential hopefuls said their higher education plans are largely congruent, there are a few key differences.

While Clinton’s plan calls for “debt-free” tuition and is more of a means-based plan, albeit one that is undefined, Sanders’ plans calls for making tuition free at public colleges and universities.

O’Leary said “we’re worried that Sanders’ plan requires states to put one-third of the money upfront on the table, but we are saying you can’t cut your funding and you have to do certain things to get the funding, but not requiring an upfront commitment from states.”

Turner said Sanders’ higher education plan would be paid for by a tax on “Wall Street speculation.” Turner also said the Sanders campaign wants to “redirect” resources to students who need them most.

If there was any sparring onstage, it was among the policy wonks who followed the campaign surrogates.

Lindsey Burke, an education fellow at The Heritage Foundation, lamented that despite the “near tripling of per pupil expenditures” since the 1970s and the attendant federal regulations that have come with increased federal dollars, very little has changed in terms of improving educational outcomes for children from poor families.

“With each of these dollars was more and more regulations, and at the end of the day, those regulations have not improved outcomes for the students they were intended to improve,” said Burke, whom Crowley described as the lone conservative at the event.

Burke’s statement drew a rebuttal from Carmel Martin, executive vice president for policy at the left-leaning Center for American Progress, who cited two unnamed studies that she said had found that increased resources changed outcomes, particularly for low-income students.

“It’s not about equitable funding but more funding for those most at risk,” Martin said.

Martin portrayed Trump as one who would inflict dramatic cuts to education and said he “exploited” people through his Trump University — a real estate education program currently facing a trial for fraud.

Of course, Trump’s campaign did not respond to that charge — or anything else, for that matter — because whatever chair they might have had on stage was empty.