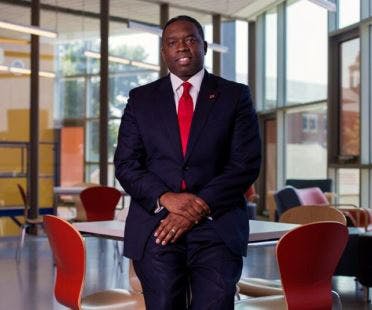 Keene State College made the news in a big way when a riot broke out among hundreds of local and visiting students who were drawn to the small city in honor of Pumpkin Fest weekend in 2014. Pumpkin Fest was an annual tradition in bucolic Keene, New Hampshire.

The festival is celebrated in advance of Halloween every October with a display of a world-record-setting collection of carved and lit jack-o’-lanterns, which are on show throughout the city.

Although the event is primarily designed for families, in the years leading up to the incident in 2014, it had increasingly drawn students from all over New England who reputedly viewed it as a party weekend.

Many Keene State students volunteered to participate in the city cleanup afterward.

Nevertheless, because the event occurred in Keene, the college received national attention.

At the time, Keene’s vice president for student affairs and enrollment, Kemal Atkins, had been in his new position for only a few months.

He took the event in stride, and it has since faded into the background, he says. “In student affairs, we’re kind of trained to expect the unexpected,” Atkins said in a phone conversation with Diverse.

As the college has moved on, so has the city: the Keene City Council voted to reject a permit to hold the festival in 2015.

For Atkins, there is far greater work at hand. As the state’s only public liberal arts college, Keene is a unique institution in New Hampshire with a distinctive mission.

It serves a student population that is more than 40 percent first generation to college.

Often, first-generation students come to college without the same supports and roadmaps in place that some of their peers might have. In response, Keene State has stepped up to take on that guiding role, Atkins says.

The college, which became a partner with the I’m First program of the Center for Student Opportunity in 2014, focuses on the entirety of the student experience, from recruitment to retention and graduation.

Keene State established an enrollment management structure in the Division of Student Affairs to form the Division of Student Affairs and Enrollment Management. The institution recently created an academic and co-curricular plan anchored by the expansion of its Living Learning Communities from three to 11 and the construction of a 349-bed Living/Learning residence hall.

The Living/Learning Communities are residential buildings dedicated to specific disciplines, such as women’s and gender studies or nature and sustainability.

In addition, 9 percent of Keene students are of color, a not insignificant amount in a state that is predominantly White. Only 6 percent of New Hampshire residents were non-White as recently as 2014, according to U.S. Census data.

Prior to Keene, Atkins was vice president for student affairs and Title IX coordinator at Delaware State University, a historically Black university located in Dover, Delaware. He received a doctorate in education from Delaware State.

Although the historic missions of the two schools and the racial and ethnic makeup of the student population at each school could hardly be more different, Atkins is quick to note that neither are homogeneous institutions.

“There’s not as much racial or ethnic diversity at a predominantly White university as you’ll find at an HBCU like Delaware State, in particular. That’s certainly been one difference,” Atkins says. “What I will say is there are certainly broader forms of diversity as well. Even while most of our students come from the New England area, they do come from very different backgrounds.”

As his career progressed, Atkins has continuously moved north. He obtained bachelor’s and master’s degrees from Appalachian State University, where he also began his career. Atkins was vice provost for student affairs at East Carolina University from 2008 to 2009.

One constant throughout his more than 20-year career is a focus on reaching out to students who might not think college is for them. While working at the University of North Carolina System, one of his early positions was director for programming and operations with GEAR UP (Gaining Early Awareness and Readiness for Undergraduate Programs) North Carolina.

He was also director of ThinkCOLLEGE, a college access program for high school and college students in Charlotte, North Carolina, from 1996 to 2001. That work continues, in the form of supporting students who are the first in their families to attend college at Keene State.

“In my family, education was emphasized. It wasn’t a matter of if I went to college; it was when and where,” Atkins explained. “Being a college student and a student-athlete, I’ve experienced the benefits of education firsthand. Helping other people realize the same benefits has drawn me to higher education.”