Black Lives Matter (BLM) activists and education leaders convened to discuss future challenges to the movement at a panel at the annual American Association for Access, Equity, and Diversity (AAAED) National Conference in Vienna, Virginia, on Friday morning.

The movement is addressing some of the same societal ills that were being challenged in the 1950s and 1960s and have come full circle, panelists said. “Over the years we got to a point where we are complacent,” said Dr. Tuajuanda C. Jordan, president of St. Mary’s College of Maryland. The Supreme Court decision of Brown v. Board of Education, which ended the legal segregation of public schools by race, is one example of some of the many great victories of the civil rights movement. A recent report from the Government Accountability Office found that schools are once more becoming increasingly segregated by race and class. 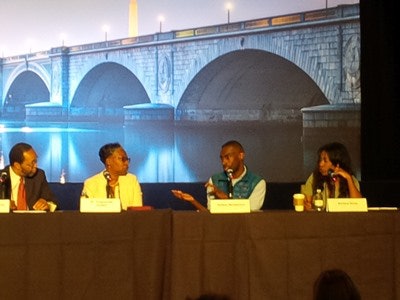 DeRay Mckesson of Black Lives Matter, second from right, and Breana Ross of the United States Student Association, far right, were among panelists discussing challenges to the BLM movement.

The BLM movement is being fought on a number of fronts, including on college campuses. “Mizzou is really a microcosm of a larger problem,” said Breana Ross, vice president of the United States Student Association, referring to the protests that rocked the University of Missouri flagship campus in the fall of 2015 and resulted in the removal of the chancellor of the University of Missouri system.

Students are taking up the movement on the campuses of predominantly White institutions (PWIs). There is a clear reason for this, said DeRay Mckesson, a protester, activist and educator within the BLM who is based in Baltimore. Mckesson also attended Bowdoin College, a PWI in Maine. Often times conflicts arise as PWIs become more diverse, numerically speaking, but the overall culture of the institution fails to become more inclusive, Mckesson said.

“Diversity is about bodies, and inclusion is about culture,” he said. “We saw places totally change their body count … but if it’s still not a safe place for people that is not an inclusive campus. That’s where the tension and the rub comes for so many students.”

Another issue with college campus activism that Mckesson highlighted is its inherently ephemeral nature. “Institutions … are designed to outlast you,” he said. “Students have four years on campus to advocate for change. Once they graduate, another group either must pick up where they left off or those efforts will lose momentum. The problem is there is not always a group ready to take on that work.”

Jordan concurred. “Students are short-lived. You put students on important committees, especially at critical times, but students are going to graduate and do something else,” she said.

“If you don’t have something systemic that really speaks to the culture that you’re trying to develop, it’s not going to be sustainable,” Jordan added. “So the question is, how do you get these things in balance. Because revolutions want immediate action, there are always things that people put in place immediately to address the short term, but oftentimes we don’t have people willing to take the time [to create] long-term sustainable changes.”