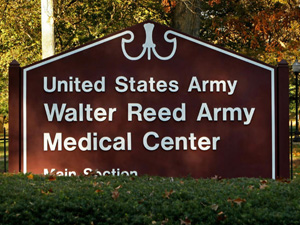 Hoping to help other veterans, he and his wife traveled from their home in Alabama to Connecticut recently to purchase two massive, jet black carriage horses, animals that were put up for auction by the state after they were seized from a breeder in February as part of an animal abuse investigation and rehabilitated through a state program involving female prison inmates who help with the care.

Thomas said the two Friesian mares, among 32 emaciated and depressed horses taken from the farm, are the perfect animals to help veterans dealing with post-traumatic stress disorder.

“They know what it’s like to go through hell and come out the other side,” said Thomas, who plans to create a program similar to the one he experienced at the couple’s 160-acre ranch in Black, Alabama. The Friesians, 1,400-pound Francisca and 1,000-pound Rosalind, will join seven other horses the couple previously rescued.

Considered a “war horse” in the Middle Ages, Friesians are a highly sought-after breed, recognized for being gentle and intelligent. Thomas knows firsthand that such a demeanor in a horse can be a calming influence for returning combat veterans.
“I’ve been through lots and lots of things. After being blown up, it’s quite a traumatic experience for you. The horses are what works for me. So I know it’s out there and works for other people because I’ve seen it,” Thomas said, explaining how there’s peace in being around such a powerful creature that could hurt you but doesn’t.

The 32 horses seized by Connecticut officials in February from the Fairy Tail Equine breeding center in East Hampton have attracted great attention from across the country because of the type of horses involved. The Department of Agriculture received inquiries from as far away as Alaska about the sealed, month-long auction. Besides Friesians, Andalusian and Gypsy Vanner horses were also seized.

Adam and Tracy Erickson, owners of Skywalker Stables in Jamestown, New York, were visibly thrilled to take home Voruke, another Friesian. The couple has rescued horses from the slaughterhouse, buying the animals from meat buyers at the eleventh-hour. They rehabilitate the horses and find them good homes. Tracy Erickson said she’s never come across a Friesian and plans to keep Voruke.

“It’s just a wonderful, gentle breed of horse,” she said.

Money raised from the state’s auction will help offset the cost of caring for the horses, which has exceeded $100,000, not including staff time. Raymond Connors, supervisor of the department’s animal control division, said winning bidders were screened to make sure the animals will go to a suitable place.

As the buyers coaxed their new horses into trailers, Connors remarked how the animals look “1,000 percent better” than the day when they were seized. The owners of the breeding center were arrested on animal cruelty charges. Their case is still pending in court.