WASHINGTON — With the vast majority of news articles about Islam being about violence and terrorism, the religion gets viewed through a “distorted lens” that makes it easy to persuade the American public to support government actions against Muslims and Muslim lands. 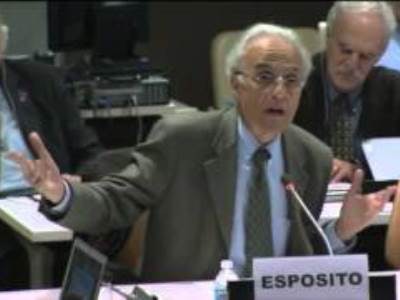 John Esposito, Georgetown University professor of Islamic studies and international affairs, said that Islam is spoken of in terms that “brush stroke an entire population.”

That was one of the major points that a Georgetown University professor of Islamic studies and international affairs made Thursday during a talk about a phenomenon known as “Islamophobia.”

“It’s Islamic exceptionalism,” said John Esposito, who is also founding director of the Center for Muslim-Christian Understanding at Georgetown and director of The Bridge Initiative, a multi-year research project that seeks to bring academic study of Islamophobia to the public discourse.

“Islam is treated in a way that you could never talk about Jews, Catholics, Christians, etcetera, in terms of making statements that brush stroke an entire population.”

A new Georgetown report, titled “When Islamophobia Turns Violent: The 2016 U.S. Presidential Elections,” states that nine out of 10 stories by news media outlets in the United States, the United Kingdom and Germany portray Islam and Muslims in the context of violence.

He was referring to the Islamic State — the violent group that has taken over swaths of land in Iraq and Syria and that has claimed responsibility for or inspired dozens of terrorist attacks throughout the world.

“It doesn’t mean they can’t strike us,” Esposito said of Islamic State. “But we have to put it into perspective.”

The professor said the media have failed to show how Muslims are integrated into various spheres of American life — from politics to culture.

Esposito made his remarks Thursday at the Newseum during a panel discussion titled “Islamophobia in Focus: Muslims and the Media.”

The topic was a particularly timely one given the rhetoric of Republican presidential contender Donald Trump, who — in the wake of the recent Chelsea bomb attack that shook New York City — has suggested the purported need to profile Muslims in order to combat terrorism.

Several panelists contended that Muslims are subjected to a double standard in which violent acts perpetrated by those associated with Islam are branded as “terrorism” but white men who hold to racist, separatist or otherwise extremist ideologies — such as Dylan Roof, who allegedly opened fire and killed nine worshippers in a South Carolina church, or Robert Lewis Dear, who allegedly opened fire at a Planned Parenthood in Colorado, killing three and wounding numerous others — are not labeled as terrorists.

To illustrate the point, Dalia Mogahed, director of research, Institute for Social Policy and Understanding, cited a headline that made a distinction for the violence committed by White supremacists.

The headline — which appeared in The Washington Times — stated: “Majority of fatal attacks on U.S. soil carried out by white supremacists, not terrorists.”

“How are we defining terrorism?” Mogahed asked as she stressed the need for a consistent definition.

Arsalan Iftikhar, founder of TheMuslimGuy.com and senior editor of The Islamic Monthly, said the anti-Islamic rhetoric of Donald Trump is “nothing new.”

He cited old as well as recent examples. They ranged from 2001 in the aftermath of the September 11 attacks, when a Louisiana congressman said anyone with “a diaper on his head’” should be stopped and questioned, to former Congressman Newt Gingrich, who stated earlier this year that all Muslims should be tested to see if they believe in Islamic sharia law and deported if they do.

“If you Google the words ‘Muslims condemn terrorism,’ you will get 2.5 million hits,” Iftikhar said. “So if you still believe that you don’t know how to use a computer.”