When Juan S. Muñoz speaks about his role and responsibilities as top diversity officer at Texas Tech University, his conversation touches on facets of the university that range from its long-term strategic plan to its recent ascent to become a top-tier research institution. 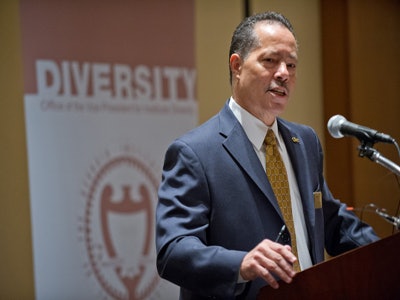 Muñoz has plenty of company among his peers, according to a new survey from the National Association of Diversity Officers in Higher Education, or NADOHE.

The survey found that 77 percent of the 196 respondents are considered part of the executive / administrative staff within their institutions.

“That means more than three quarters are at the center of decision making at some level that’s in the executive ranks of the institution,” said Archie W. Ervin, president of NADOHE.

“That’s what we want,” Ervin said. “We want to be in the position of making a difference and having an impact.”

Ervin said the fact that so many diversity officers are in the upper echelons of university administration is a welcome sign of progress for a specialized profession that is relatively young.

“That is a phenomenal level of positioning given that these positions are not much more than a couple of decades in the making,” Ervin said. “Twenty years ago, we weren’t at the table.”

Ervin said the survey — conducted earlier this year — is an effort to better understand the roles and responsibilities of NADOHE’s members.

The survey comes at a time when issues of diversity on campus have become front and center. For instance, many of the campus protests that have taken place over the past year or so have included calls to make America’s colleges and universities more welcoming to racial and ethnic minorities, people of different sexual orientations, and to hire more faculty whose identity reflects the population of students they serve.

The massive discontent raises questions about how much disaffection among students can be put at the doorstep of diversity officers.

“I don’t think you put anything at the doorstep of the chief diversity officer,” Ervin said. “You put it at the door of the institution. We don’t do these things in silos.”

“When issues arise about campuses not being reflective and supportive of the diversity of the student body, the faculty and the staff at any institution, it becomes an institutional matter,” Ervin said. “But you have a leadership position to address that,” he said in reference to chief diversity officers.

Ervin rejected the notion that the recent trend toward the establishment of diversity offices (the NADOHE survey found 66 such offices founded in the last five years alone) is a mere token response to deep-rooted problems, such as incidents of hostility and feelings of isolation and marginalization among students from various groups.

“Given the amount of  resources required to do these kinds of operations, I don’t think it would be tokenism,” Ervin said. “Because there would be much cheaper ways to express tokenism as a response.

“You could say, ‘Diversity is everybody’s business. Everyone should be doing it,’” he said when asked for an example of a less expensive expression of tokenism “That was done in the mid-80s before these positions came into being.”

“By having a chief diversity officer, you have given a level of leadership and dedicated attention to this that puts it in the leadership structure of the university, and I don’t think that it’s tokenism,” Ervin said.

Be that as it may, not everyone is convinced about of the value proposition of diversity officers.

For instance, earlier this year, David Frum, a senior editor at The Atlantic and the chairman of Policy Exchange, a United Kingdom-based think tank, penned a critique that suggested the growth of diversity officers is part of the administrative bloat that lurks behind the high cost of college.

“I anticipate the response: This only represents a tiny fraction of the growth among administrators! Diversity is important! Graduation rates among Black university students have improved in recent years,” Frum wrote. “Surely all these chief diversity officers are accomplishing something?”

“Yet the closest studies of disadvantaged-student performance discover that what such students need most is more intensive teaching and mentoring,” Frum wrote.

The NADOHE survey doesn’t delve into issues of impact. Rather, it seeks to delineate what diversity officers do and are positioned to do and what kind of resources they have at hand.

Among other things, the survey found that:

“This is not surprising,” the survey report states. “However, the finding that 61 percent of diversity offices have a formal strategic plan that is separate from the institution’s strategic plan suggests there is a need for more localized strategic planning regarding diversity efforts.”

Ervin acknowledged the need to get more pertinent information, such as the size and type of institution in question, in order to put diversity office budget and staff figures into better perspective.

The survey also found what Ervin referred to as “creep” of various compliance responsibilities into the portfolios of diversity officers for matters that range from compliance for students with disabilities to issues of discrimination and affirmative action.

“It is likely this oversight only adds to the already stretched resources of many diversity offices,” the report states. “It is important to note that 63 percent said they had staff dedicated to perform compliance functions, and a majority (84 percent) stated that between 20-60 percent of their office’s time was spent on compliance issues.”

Ervin said whether the increased compliance responsibility is good or bad for chief diversity officers depends on how much staff are available to deal with such issues.

“It depends on yow you look at it,” Ervin said. “If you’re resourced properly to do it and have the personnel to do it, it works very well because you can at least keep leadership on this issue area because it’s in your area of responsibility.”