Rodriguez: Faith in the Electoral College or the Path to Apartheid?

While most of the electorate believes that the president-elect will be handed the keys to the White House on Jan 20, 2017, others are still holding out hope that the Electoral College (EC), which meets on Dec 19, 2016, could still disqualify him, preventing him from becoming the 45th president of the United States. 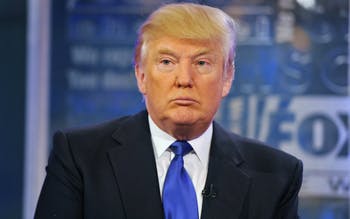 Below are 13 reasons that the EC should deliberate on, because being guilty of any of them would make any candidate, but particularly him, ineligible to hold the nation’s top office. He has:

1) never acknowledged Barack Obama as the legitimate president of the United States; was primary proponent of birther movement.

3) alleged before the election that the election was rigged. This included unsubstantiated allegations, after the election, that at least 3 million people had voted illegally.

4) accused President Obama of being a secret Muslim, who supported terrorism including claiming that the president was a supporter of Al Qaeda and the founder of ISIS.

5) campaigned in support of violating U.S. and international law by endorsing waterboarding and even harsher forms of torture.

6) encouraged political interference by a foreign government. Specifically, he encouraged Russia to hack into his opponent’s campaign.

7) encouraged ethnic cleansing by promising the deportation of 11 million migrants within 18 months via a special deportation force, while directing all his vitriol against Mexican peoples specifically, and while advocating the building of a 2,000-mile wall along the U.S.-Mexico border.

8) encouraged hate and violence throughout his campaign, against those who opposed him at his campaign rallies.

9) intractable conflicts of interest and corruption via his worldwide businesses, including failure to separate his family and his family business from government.

10) exhibited conduct and behavior highly detrimental to women. It is beyond how he addresses, treats and denigrates women, but also the numerous allegations of sexual misconduct against him. Without question, this is behavior unbecoming of a president.

11) threatened to nullify the 1st Amendment, by threatening to rescind the citizenship or the imprisonment for one year, of those that burn flags. This threat is compounded by his contempt for the press, an institution that best symbolizes the 1st amendment.

12) normalized lying to the point where fact-checkers assert that he lies daily, consistently and repeatedly, again a trait, unbefitting the nation’s president.

13) [through his advisers] threatened to privatize American Indian reservation land and sell it off to the highest bidder.

Given these verified facts, assertions, threats and proposals by he and his incoming administration, the only checks and balance, ensuring that the president-elect is even qualified to hold the office of the president, is reserved for the EC and Congress.

After the debacle of the 2000 election in which Al Gore won by more than half a million votes and still lost to George W. Bush, many felt it was time to abandon the antiquated Electoral College system. Yet, four election cycles and 16 years later, we have an even more absurd situation before us. His opponent has tallied 2.5 million more votes than he, but barring something unforeseen, he will be installed as president in January.

It seems that the only thing unforeseen would be for the EC to actually function as a deliberative body—as was the intent when it was originally created—and rule the president-elect unqualified to hold office, as opposed to simply functioning as a rubber-stamp. A well-deserved impeachment, before an impeachment.

The reason the EC should be abolished is because it is a process and not actually a deliberative body. Despite this, there is a mechanism by which the president-elect could be denied his place in history. The mechanism is referred to as a “faithless elector” — that is a member of the Electoral College that does not vote based on whom they are pledged to support.

In the history of this country, there have been but 175 faithless electors. It is highly unlikely that enough of these electors will all of a sudden step forward to thwart the president-elect. He has thus far won 290 electoral votes (Michigan has not certified its election). It would take 37 defectors to thwart his installment. Minimally, one might expect that a deliberative body would debate the above points and determine if he is even qualified, given the fact that he especially refused the first two points.

In the event that the so-called college fails to deliberate, then that function actually falls upon the Republican-controlled Congress. Because it is not in their self-interest to vote themselves out of power, we may have just officially entered the era of apartheid in these United States.