Experts Pushing for Diversification of Senior Staffs in U.S. Senate

WASHINGTON — Citing statistics that show a paucity of senior staffers of color in the U.S. Senate, a National Urban League representative on Thursday called for legislative action to keep better track of the issue so that senators can be held accountable for making sure their offices are diverse. 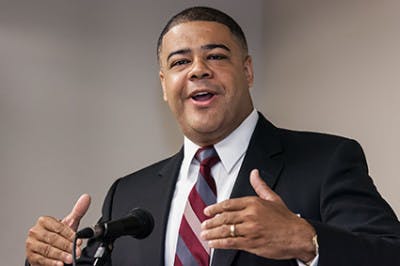 “Congress should enact legislation or a rule where they will start recording numbers,” said Donald Cravins, Jr., a former Louisiana lawmaker who now serves as the National Urban League’s Senior Vice President for Policy.

“We’ve got to know the real data. The Senate needs to be more transparent,” said Cravins, an adjunct in the School of Professional Studies at George Washington University.

The transparency that Cravins called for could come sooner than later.

The resolution calls for up to $1 million to establish an office, and for the chief diversity officer to hire two individuals — one for the majority party and one for the minority — to collect statistics to produce a biannual diversity report and to develop and implement plans and programs to increase diversity among employees of senatorial offices, whether of individual senators or senate committees. It remains unclear, however, as to whether the resolution will ever make it to the Senate floor.

The proposal comes after one of the most divisive elections in American history and at the dawn of one of the rare instances where Republicans — who have largely failed to capture the majority of the African American and Latino vote — will control the White House and both chambers of Congress.

Cravins, who served as chief of staff for former U.S. Senator Mary L. Landrieu, a Democrat from Louisiana, said the lack of diversity among senior Senate staffers has been a longstanding scourge on the U.S. Senate.

By senior staffers, Cravins is referring to chiefs of staff, legislative directors, and communications directors. Within the offices of the 100 U.S. Senators, only one of each of those three positions is held by an African-American, Cravins said.

“Out of three hundred senior level positions in this body, three are African Americans,” Cravins said. “What’s most insulting to me is only one of them works for a Democratic member of this Senate, a party that goes out in every election and relies on Black and Brown voters to elect them.”

Cravins made his remarks during a National Urban League discussion titled “Increasing Racial Diversity in the Senate.”

The panelists — including Bell — recounted the paths they took to get to Capitol Hill, explained why it is vital to have staffers of color at the senior level, and described the various challenges associated with attracting and retaining staffers of color.

For Bell, the path to Capitol Hill started in law school. More specifically, he participated in the UConn Law Semester in DC program in the fall of 2012.

Bell became the first person in the program to work for a senator when he joined the office of U.S. Senator Richard Blumenthal (D-Conn.) as a legal fellow.

“I had no idea that working on Capitol Hill was an option,” Bell recalled of his days at the University of Connecticut. “The opportunity to be here really opened the door to get a permanent position,” said Bell, who is counsel to ranking member Jon Tester on the Senate Committee on Veterans’ Affairs.

Bell said while there is a role for colleges and universities to play in smoothing the path for college students from diverse backgrounds to secure junior and mid-level positions on Capitol Hill, that does not absolve individual senators from doing more to ensure that their staffs are diverse.

“The offices themselves have to be proactive,” Bell said.

Staffers of color can play a key role in ensuring that language senators use — in speeches and otherwise — doesn’t rub people the wrong way or come across as tone deaf, several panelists said.

Kiara Pesante, communications director for Democrats on the House Committee on Education and the Workforce, for which Congressman Bobby Scott, (D-Virginia) is the ranking member, recalled an instance in which material that staffers had prepared needlessly used the word “chokehold” — a term that would have bene particularly offensive in the wake of the police chokehold death of Eric Garner.

“Had I not been the person reviewing that, maybe someone else would have just passed it,” Pesante said.

“Ultimately, the boss wants to communicate to the people he represents,” Pesante said. “So you need to make sure the message makes sense to the community.”

Ami Sanchez, general counsel for the Senate Committee on Small Business & Entrepreneurship, said she is often consulted for immigration issues on the strength of being Latina, even though immigration is not her area of expertise.

“It does become difficult when there are not enough of us in the room,” Sanchez said. “We are often looked to for particular issues. It’s not fair for the one staffer or color in the room but for the people impacted by the policy.”

When minority staffers are on senate committees, she said, it’s often in communications or “outreach” but not in the area of policy development.

Cravins said it’s important for Senators to post positions publicly when they become available. But panelist Jennifer DeCapser, chief of staff for Senator Tim Scott, a Black Republican lawmaker from South Carolina, said that may not be the best thing for diversity. Instead of posting positions, she said, she can reach out to groups such as the Urban League when seeking diverse talent.

While some panelists lamented the difficulty of retaining Black staffers, DeCapser said although Black Republican staffers are often recruited out of their positions by corporations, she doesn’t view that as a bad thing even though it dissipates the number of minority staffers.

Cravins said the Senate needs to employ a version of the “Rooney Rule” — an NFL rule that requires teams to interview at least one minority candidate for an open head-coaching position.

DeCapser, however, said she didn’t think some Senators would be open to such a thing.

“Some offices are not going to respond to things being imposed,” DeCasper said. “I don’t know how you mandate caring but if there’s a mandate for that, that’s what it’s about.”