Cara Sklar is the director of research for the Briya Public Charter School in the Northeast section of Washington, D.C., whose beautiful, new energy-efficient facility was built on the site of a traditional public school that looked like a concrete fortress. With pride, Sklar explains that the goal of the school is “ending the intergenerational cycle of poverty.”

That goal could seem naïve. In D.C., “ending the intergenerational cycle of poverty” has frustrated the best efforts of 40+ years of Black political control and billions spent on education and social services. It’s extremely difficult for someone without a high school diploma to enter a career that can support a family. For an unskilled person from a dangerous environment who can’t speak standard English or has a small child, it’s almost impossible. 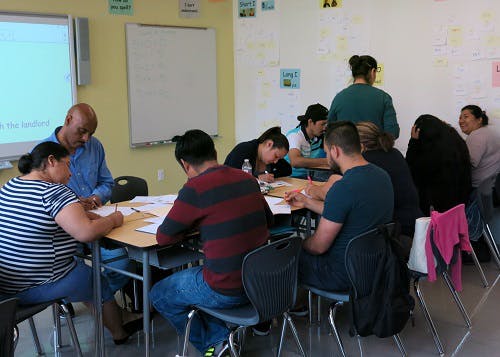 However, due to a unique feature in the 1995 Charter School Law that a Republican-controlled Congress enacted when the District was bankrupt, Briya is one of nine D.C. adult charter schools with the resources and flexibility to help thousands of poor residents achieve this elusive goal. Proponents claim that charters will reform public education by offering parental choice, freeing children trapped in failing schools and giving traditional public schools the incentive to improve or else starve. Opponents, however, view charters as a conservative conspiracy to divert public funds to for-profit entities and undermine teachers’ unions.

“Many insiders believed the City Council really wanted charters as an attempt to keep the middle class in the city, or to recognize the growing political clout of the immigrant and Hispanic communities in Northwest,” she says.

In almost all jurisdictions with charters, the schools receive approximately the same per-pupil funding as traditional public schools, plus additional funds to cover the cost of renting or buying and maintaining their facilities. More significantly, D.C.’s charter law was the first in the nation to apply this formula to adult students.

Today, D.C.’s per pupil funding is approximately $8,000, with an additional $3,000 or so for capital expenses, all of which is radically changing adult education.

In neighboring Prince George’s County, Maryland, no adults attend charter schools. Like most jurisdictions, Prince George’s offers adult education programs, usually GED prep or workforce development classes through community college or nonprofit organizations. In D.C., as many as 70 percent of adults without a high school diploma now attend one of about a dozen charter schools. Many states still don’t have even one charter school that caters to adults.

Charter schools for adults can make a significant difference. In 1985, The Academy of Hope (AOH) started as a church-based charity to help disadvantaged adults complete high school. Its director, Lecester Johnson, says that total funding used to be about $3,000 per student. After becoming a charter school in 2014, AOH started receiving nearly four times as much, and it can still raise private funds or apply for government grants. As a nonprofit, AOH once relied on volunteers. Today it employs professionally trained instructors.

And, as a historical matter, Spinner is correct. All of D.C.’s earliest and most established adult charters were started in the Latino and immigrant communities of Northwest D.C., representing a largely unreported story of Hispanic social and educational entrepreneurship.

America’s oldest adult charter school is named for Carlos Rosario, a Puerto Rican activist and the first head of D.C.’s Office of Latino Affairs. In 1970, he organized D.C.’s first program for English Language Learners (ELL), which later provided citizenship classes and other services.

In 1996, D.C.’s financial crisis almost eliminated funding for adult education. The program’s director, Sonya Gutierrez, struggled to keep it alive as a nonprofit in the basement of her own home. She applied for a charter and succeeded in 1998. Today, the school has two campuses that train and educate more than 2,900 students a year. The majority are Hispanic, but the school also serves Asian and African immigrants as well as local residents of many ethnicities. Ages range from 18 to over 80, and classrooms hum with a dynamic energy from being part of a movement for freedom and dignity.

“At Carlos Rosario, the most important thing we offer students is not education, it’s actually love, encouragement, acceptance and community,” says Sandra Gonzalez, a long-time staff member at the school.

In 1989, Briya started out as a program serving Vietnamese and Central American war refugees. Becoming a charter helped it enact its philosophy of educating parents and children in the same environment. Comprehensive health care is provided through a partnership with Mary’s Center, a community clinic located in the same building.

“The biggest reason poor women don’t finish high school is (that they have) trouble finding child care or health care,” Sklar declares. “They can get all those services right here.”

To provide families with economic security, most charters’ training programs offer nationally-recognized certificates. Many employers accept them as proof that applicants have the education, skills and attitudes required to fill millions of positions requiring post-secondary training but not college degrees. The most recognized are probably A+ Helpdesk and Systems Engineer certificates. Briya offers certificates in child development and health care.

“These skills allow our students to get well-paying jobs in fast-growing fields, but they also help them to take better care of their own children and families,” says Lauren Stoltzus, Briya’s communications director.

The general success of D.C.’s adult charter schools is based on more than just generous funding. One factor is the charter law itself, which helps prevent some of the financial abuses that take place in other jurisdictions where charters can be run by for-profit corporations. Every D.C. charter school must be run by a separate nonprofit institution; the majority of the members of their boards of directors must be D.C. residents; and the board must include at least two parents or two students in the case of adult charter schools.

As a result, D.C.’s K-12 charter system has only had two major financial scandals. The Options and Dorothy Height schools were closed because school officials contracted with for-profit companies they controlled.

So far, only one adult charter has been closed. Booker T. Washington had some administrative and paperwork problems, but, most importantly, it failed to deliver the educational and career outcomes promised by its charter.

“The real strength of the charter movement is holding schools responsible for outcomes,” says Naomi Rubin DeVeaux, deputy director of the District of Columbia Public Charter School Board (DCPCSB), which authorizes and closes charter schools. “Traditional public schools have focused on inputs: how many students per class; how many dollars per student; how many teachers are certified. Well, we focus on outcomes, and, most importantly, each school gets to define its own outcomes.”

This philosophy gives adult charter schools even greater flexibility than K-12 charters, which, on some level, must focus their outcomes on having most students graduate. An adult school like Briya can include increasing a student’s ability to communicate with their landlord in English or read and understand a lease agreement as legitimate educational goals.

Of course, no structure is perfect. Catherine Meloy is the president and CEO of Goodwill of Greater Washington, which recently established The Goodwill Excel Center, an adult charter school based on a school Goodwill established in Indiana, one of the few states that followed the District’s example of adult charters.

Meloy feels that DCPCSB seems honest, competent and well managed. However, other charter administrators would probably agree with her sentiment that “It’s sometimes a problem for adult schools to deal with a board that primarily supervises schools for people under 18. We don’t have parental pressure or a compulsory education law to keep students in their seats every day.”

One factor in some charters’ successes is their demographics. All must admit students by lottery to avoid discrimination or cherry picking the best learners. Still, students learn about charters through personal networks. Carlos Rosario and Briya primarily serve adults who possess the optimism and motivation immigrants are known for.

This year, the Latin American Youth Center’s Career Academy, catering to students between ages 16 and 24, had its charter threatened due to low graduation rates. It survived due to strong community support and the recognition that many of its students have academic or emotional difficulties. By contrast, Goodwill, CCPrep and Academy of Hope were created to help students escape a culture of poverty.

“Goodwill’s charter school grew out of our success in training unemployed D.C. residents for jobs in the Marriott Marquis,” explains Meloy. Working at a luxury hotel requires social behaviors many trainees seldom encountered in their neighborhoods, such as instantly apologizing to someone who was unsatisfied, even if the problem was not their fault.

“Some trainees’ attitudes were a challenge,” Meloy says, “but we still realized that all of our Marriott applicants had finished high school and been screened for drugs and felony convictions. By contrast, our Excel school can’t screen students or discriminate against people with emotional disabilities or legal problems.”

Goodwill realized that many of its potential students lived in the poor neighborhoods east of the Anacostia River but deliberately opened Excel downtown, close to the White House. “We wanted our students to get out of their comfort zone and into an atmosphere of regular work and success,” says Meloy.

Connie Spinner took the exact opposite approach in establishing CCPrep. “We wanted to be the first to bring per-student public funding for adults east of the Anacostia,” she says. (Academy of Hope was the second.) CCPrep’s main campus is a beautifully renovated theater on a rough block. CCPrep doesn’t discriminate against men, but its focus is providing disadvantaged women with computer skills and preparing students for community colleges without having to take remedial classes.

Unlike most adult charters, CCPrep wasn’t started by an established nonprofit. Spinner was a senior administrator at UDC’s Community College who teamed up with a corporate partner, Peterson Publishing. Under its bended learning model, students spend two hours in the computer lab (or online) for every hour with a human instructor.

CCPrep looks and feels a lot like an attractive for-profit college that knows it has to be student-friendly to maintain its enrollment. The critical difference is that CCPrep is free, so even its dropouts aren’t burdened with debt.

“We offer morning, afternoon and evening classes so students can fit us into their very complicated lives,” Spinner explains.

Like Goodwill, her school invests a lot of energy into encouraging persistence. “I know that some of my students will drop in and out several times before they graduate,” she says. “But still, we have helped two or three hundred people, who have only graduated from high school, obtain Microsoft certifications for jobs that pay $40,000 a year.”

Across the river, that’s almost a miracle.