The futures of more than 800,000 DACA recipients hang in the balance after President Trump rescinded the federal program currently allowing them to work and study in the United States. Close to half of DACA recipients are enrolled in school or college, and the higher education community has spoken out in support of continuing or updating the program. 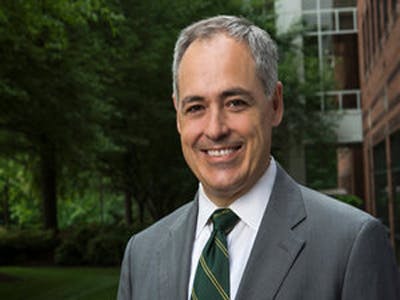 College leaders from the Washington, D.C., metro area met at Georgetown University on Monday to affirm their commitment to DACA and to call on Congress to pass the DREAM Act. The gathering kicked off “Higher Education Week,” a national campaign led by the American Council on Education along with colleges and universities across the country in support of DACA recipients and Dreamers. Approximately 23,000 DACA recipients and Dreamers attend college in D.C., Maryland and Virginia alone.

George Mason University president Dr. Angel Cabrera said that it was critical that Congress act to help protect hardworking young people from deportation. “It is not just an issue of justice,” Cabrera said. “If we don’t find a solution not only are we being incredibly unfair, we are being plainly stupid as a society.”

President Obama passed the Deferred Action for Childhood Arrivals (DACA) program by executive order in 2012. Through DACA, undocumented young people brought to the U.S. as minors by their parents were able to apply for a permit that allowed them to work and to attend a postsecondary institution.

The program did not provide a path to permanent residency, but rather deferred deportation for participants. Permits had to be renewed every two years for a fee of $495, and were only granted to qualifying applicants who had stayed clear of legal trouble and were either enrolled in or had graduated from high school, among other requirements.

As of early October, the opportunity to apply for a permit renewal through the Department of Homeland Security ended. Applications for initial permits closed in early September. The Trump administration has given Congress up until March 5 to create bipartisan legislation that would create more formal immigration procedures for current DACA recipients, but after, the program will end and current recipients will begin to lose their status with no option for renewal.

Resolving the current challenges to DACA is one of the most significant “social justice issues of our time,” according to Dr. DeRionne P. Pollard, president of Montgomery College, a community college in Maryland. DACA recipients work and contribute to the economy, and often are making significant financial sacrifices to get an education, she said.

“It is a moral imperative, it is an educational imperative, and most importantly if you can’t get your head around the fact that it’s a social justice issue, it is also an economic issue for our country,” Pollard said.

Some states, such as Maryland and California, passed versions of the proposed DREAM Act which allow qualifying undocumented students to apply for in-state tuition and other forms of financial aid. The DREAM Act was first introduced in Congress in 2001, and would have provided a path to permanent residency.

As a result, the future is uncertain for DACA recipients. At the Monday gathering, Georgetown student Luis Gonzales said, “When I secured my DACA status, it allowed me to make the decision to come to Georgetown.” His parents migrated to the U.S. in the late 1990s in pursuit of better economic opportunities and reunited the family in California when Gonzales was eight years old.

Despite initial linguistic barriers, Gonzales excelled in school. “I distinctly recall when I was first enrolled in second grade my teacher began using a pocket Spanish-English dictionary to be able to communicate with me,” Gonzales said. Now Gonzales is taking steps towards realizing his dream of becoming a teacher in his hometown of Santa Ana, California – a goal that appears more elusive than ever in light of the current existential threat to DACA.

“It’s all uncertain territory,” Gonzales said. “I do not want to go back to living in the shadows, as I’m the only hope my family has to break out of the cycle of poverty.”

Before DACA was threatened, Gonzales said that he was not always comfortable with sharing his experience publicly. “That is, until after the 2016 election, when I realized I could be an agent of change by sharing my narrative,” Gonzales said.

“It is always important to recognize the individual stories and the experiences of those who are affected by a given policy,” Gonzales said.