Mawine G. Diggs has gone back to her native Liberia numerous times since first coming to the United States around the age of 7, and now she’s planning the ultimate return home as the African nation’s newly appointed director general of the National Commission on Higher Education. 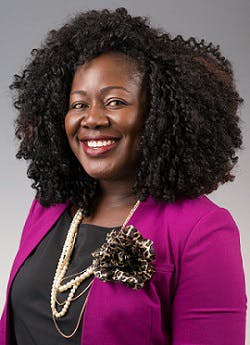 Diggs, president and chief academic officer of the Eastern Campus in Michigan’s Wayne County Community College District, starts her new post next week as an appointee of Liberian President George Weah. As the first woman to head the NCHE, which was established in 1989, she will oversee policy and regulation regarding all institutions of higher learning in the republic, foster national alignment and build international collaborations.

“It’s just an honor to be called back to serve,” said Diggs, who has jointly served as assistant to the chancellor for student engagement in her current job. “I’m overwhelmed, I’m humbled and I’m excited because I know my passion for education will allow me to make a significant impact in this sector.”

Liberia has a large college-age population, Diggs noted, and part of her challenge will be to lead the way in connecting citizens to post-secondary educational resources that lead to economic uplift.

The youngest of four children, Diggs came to the United States with her mother, who pursued higher education here. Liberia’s infrastructure, including schools, were extensively damaged during the country’s first civil war from 1989 to 1997. Her father died during the war.

Diggs returned to Liberia for junior high and high school, worked a couple of years after graduating and then came back to the U.S. for college.

“I was fortunate to be able to seek higher education in the United States,” said Diggs, now 36. “I never took that for granted. I always saw that as a blessing afforded to me that I had to make the best of.”

She attended Roanoke College, becoming a charter member of the school’s chapter of Delta Sigma Theta sorority and the first Black student government association president before graduating in 2006 with a bachelor’s degree in sociology and environmental policy.

Diggs has a master’s degree in education from Clemson University and is a doctoral candidate in the field of higher education at National American University. An advocate of diversity, she has taught leadership courses at Clemson and at the University of Maryland – College Park, where she also worked in residence life.

Diggs moved to Detroit in 2011 to serve as district dean of student services. In 2015, The Michigan Chronicle named her to its annual list of “50 Women of Excellence.”

She assumes her new position in Liberia at a time when other changes in higher education are afoot. In June, the acting director of the NCHE , David S. Dahn, moved to shut down six institutions of higher education that were said to be operating illegally because they lacked an operational permit and provisional accreditation. Those schools were Dayspring Bible College, Grace International Bible University, Pilgrims College & School of Ministry, Liberi College of Nursing & Divinity, New Dimension Theological Seminary and the ASSFI University College.

As a second home, the U.S. has given Diggs not just higher education, but a support network and valuable experiences that built on her family traditions and cherished values, she said.

She feels a range of emotions as she says farewell, “but gratitude keeps rising to the top.”

“Every experience has helped shape me and prepare me for this moment,” she said. “Everything I’ve done has prepared me to return home and work in the education sector there.

“I spoke this into existence, and I guess God heard me.”