cmaadmin (EDU)
Mar 7, 2019
PHILADELPHIA – Persisting as a Black chief diversity officer or other senior administrator at a predominantly White college or university tends to be a delicate balancing act that calls on multiple skills and sensitivities. That was a recurring theme addressed this week at the 13th annual conference of the National Association of Diversity Officers in Higher Education (NADOHE). 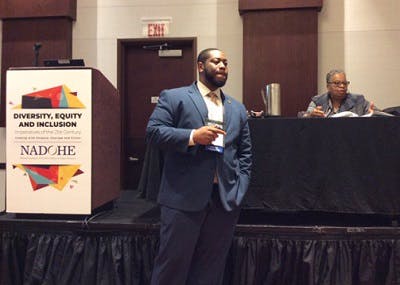 During a Thursday session titled “Transitioning Normalcy: Persistence Strategies of African-American Administrators in Higher Education,” attendees discussed how to navigate the tension between being part of a university leadership team, remaining true to your convictions in your role and nudging the institution to change traditions that promote a culture of White privilege.

“It’s important to have the internal dialogues about what you’re willing to compromise to achieve what you define as success,” said co-presenter Dr. Brandon L. Wolfe, assistant vice president for diversity, equity and inclusion at the University of Alabama at Birmingham.

Wolfe and Dr. Paulette P. Dilworth, who is vice president in his office, presented findings from their case-study research about how six Black administrators perceived the intersection of diversity leadership, whiteness and organizational culture at their southern PWI.

In their study, Black administrators said they persisted because they wanted to influence hiring practices, policy and curriculum and they desired to represent their culture and community.

Those appeared to help mitigate feelings such as isolation, tokenism, racial battle fatigue, being over-scrutinized and being pigeon-holed in their position. The administrators identified other factors that impacted their persistence, including insufficient staff recruitment efforts, low retention rates, implicit bias, lack of career path or professional identity, lack of formal promotion structures, competition within the academy and institutional land mines.

Regardless of different perspectives on the role of race in their individual situations, Dilworth said, every study participant “communicated that doing the right thing took precedence over persistence.”

Embracing all aspects of diversity was a theme struck by political pundit Ana Navarro in a keynote address Thursday sponsored by Lehigh University. 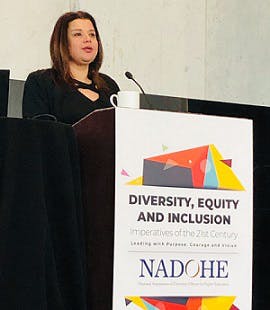 In remarks sprinkled with humor and jabs at President Donald J. Trump, Navarro described discrimination as “a two-pronged problem” of the ignorance of those discriminating and the response to the discrimination.

“My response is a catalyst to be better, to do more, a catalyst to lean in and not shy away,” she said. “Let it make you mad, but let is also make you act.”

Navarro, who was born in Nicaragua and immigrated to Miami in 1980 at the age of 8, acknowledged that she doesn’t fully understand blackface and its significance and said diversity is important for that reason.

“We can’t assume people understand the historical significance of things that make us hurt,” she said.

That’s particularly true in higher education, she said, where “everybody doesn’t know and too often we assume everybody knows.”

Diversity goes well beyond skin color and gender, she said, suggesting that people should make efforts to get past confirmation biases, group think and intellectual echo chambers to “embrace diversity of thought.”

“We get stuck on labels sometimes and there’s so much you can’t see from the outside. All of us are collections of experiences and people that came before us,” she said.

Responding to an audience member question, Navarro said the work of diversity officers is “crucial” in helping people look beyond labels and understand the complexity of diversity. Although younger generations appear to be less “stuck” on labels, she said, an absence of labels can be a problem.

“A label would help every now and then,” she said. “I can’t keep up with the gender fluid thing, anymore. I need, like, a manual.”

In terms of access and equity, diversity officers in higher education are in a position to be disruptors who “represent with no qualms about it,” Navarro said, adding that their work “is what makes America great now.”