Brandon Keith Brown, a former Brown University Orchestra director, has filed a discrimination complaint against the institution with the Rhode Island Commission for Human Rights, alleging that he was terminated in 2017 on the basis of his race. 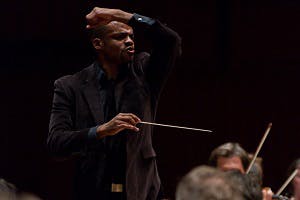 Brown’s complaint with the commission details the events leading up to his termination after only six weeks in his role as Visiting Professor of Music and Orchestra Director at the ivy league school.

The complaint outlines racial bias and stereotyping from students, “overmonitoring” by leaders in his department and an overall hostile work environment that caused him to become withdrawn, physically sick and “extremely anxious,” he said.

This week, the former faculty member – now living in Berlin, Germany – has also requested a second settlement agreement with the university.

“Being a Black man, I know that I will never be believed over a White person,” Brown told Diverse. “I wasn’t allowed to defend myself. Nothing I said or could’ve done would have been sufficient.”

After accepting a one-year position at Brown University in May 2017, Brown arrived at the university on September 5, 2017 and notes that he immediately felt tokenized after deputy provost and interim music department chair Joseph Meisel told him that his hiring was part of an effort to diversify the department.

“I knew then that I would be judged more harshly than all other faculty members because I was the first and only Black faculty member,” Brown said, referencing the university’s acknowledgement that the department faculty has historically been all White males.

Brown said that on the same day, he began to feel bullied, harassed and intimated by another faculty member that others warned him to try to stay away from, he said.

Concerns from students became apparent on Sept. 6 when then-student orchestra president Katerina Rademacher wrote to Brown by email that several students were “anxious” and “nervous” about returning to orchestra that year. This was before students had met Brown, he said, “which is a racial stereotype of unknown Black men, which is very common in academia and throughout the world.”

However, students in orchestra raised more complaints throughout Brown’s tenure, describing him as overly strict, rude and reluctant to listen to their concerns, The Providence Journal reported.

Brown disagreed with students’ portrayal of his instruction, saying he implemented a number of reforms that improved the management and sound of the orchestra.

“Everything was regimented, including scheduling,” Brown said. “It was a really beautiful process and I was actually commended on this on September 6, via email, by Joseph Meisel.”

On another occasion, a student – one that allegedly told Brown, while smiling, “You are really different from the last conductor. I am scared of you. I am afraid to talk to you right now” – shared with Meisel that the orchestra sounded better at its third rehearsal of the semester than it usually does seven weeks later at concert time, Brown said.

Even so, the reforms he put in place as a trained conductor were ones that students “rebelled against,” Brown said.

“When I arrived at Brown University, I unknowingly arrived to an orchestra that was completely in chaos,” he said. “The department was in complete disarray. Students would come to rehearsal whenever they wanted to late. They didn’t help set up in rehearsal. They weren’t in their seats warming up. It was complete pandemonium in terms of my standards – or actually any standards of how a university orchestra should run. The students ran the orchestra.”

As student complaints about rehearsals and what Brown said was a “smear campaign” by students continued, the deputy provost similarly continued to “scrutinize” and over-monitor his work as professor and orchestra director into late September, Brown claims.

Later on October 17, Brown was fired without investigation after threatening to call the police on an unruly student violinist who placed his hands on Brown before finally leaving the rehearsal hallway.

“I taped many of my rehearsals and the video footage, which was viewed in full by my then attorney and his wife who is a Brown graduate and attorney, they found absolutely no wrongdoing,” Brown said. “Since that time, this footage has been reviewed by other attorneys and also the media, and now it’s being reviewed by the investigator for the Rhode Island Commission for Human Rights.

“There’s no wrongdoing, and Brown refused to view this footage because they had racial bias already,” Brown continued. “They only sought negative information to serve their racial bias and confirmation bias against me in order to justify a termination.”

Brown University spokesman Brian Clark said in an email statement that the university is aware of the complaint filed with the commission.

“We do not consider details related to employees at Brown, current or former, to be matters of public record, so we are not at liberty to share specific information about our former visiting assistant professor’s time on campus,” he said. “What I can say is that we will defend vigorously against the allegation. Already, we have provided facts and evidence to the Commission for Human Rights and responded at length to its questions. As the commission’s process resolves, we are fully confident that we have a strong case to make.

“More broadly, Brown is a university community guided by shared values, an unyielding dedication to diversity, equity and inclusion, and a fundamental commitment to supporting and respecting one another in our interactions,” Clark said. “In no circumstance do we discriminate on the basis of race, disability or any other attribute.”

Brown, 39, said that had he been a White faculty member, students would have seen him as “relatable.”

“The social distancing that these students have experienced from Black populations have allowed them to have morbid racial stereotypes about African American men,” which carried over into his class, Brown said, noting that department leadership’s reasoning for his termination relied on the opinions of biased students and also other faculty who had not even met him.

“Brown is a good ‘ol boys club, and orchestra is a hobby,” Brown said in a statement. “Had I known this, I wouldn’t have come.”